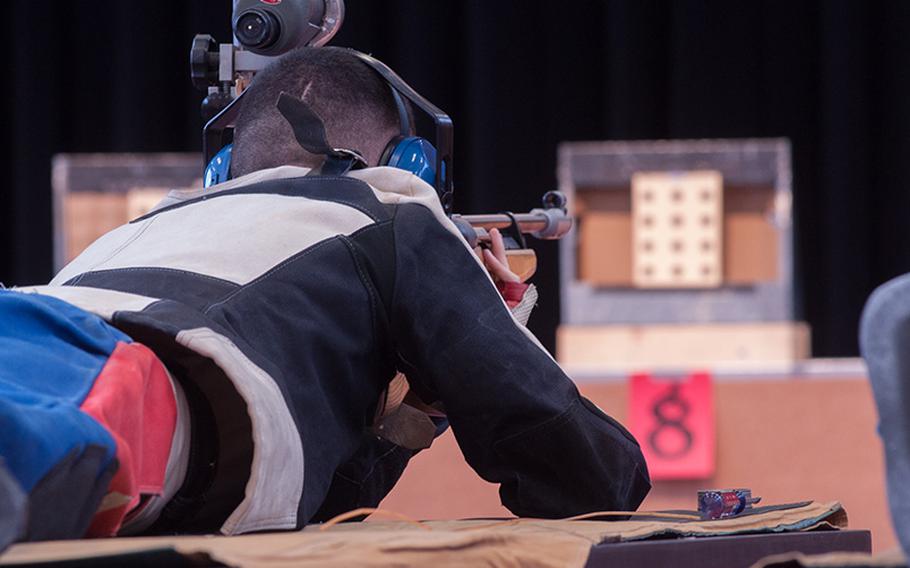 Daniel Sharp, a Wiesbaden shooter, aims in during the final iteration of the 2015 DODDS European Marksmanship Championships at Vilseck, Jan. 31, 2015. (Michael S. Darnell/Stars and Stripes)

Daniel Sharp, a Wiesbaden shooter, aims in during the final iteration of the 2015 DODDS European Marksmanship Championships at Vilseck, Jan. 31, 2015. (Michael S. Darnell/Stars and Stripes) 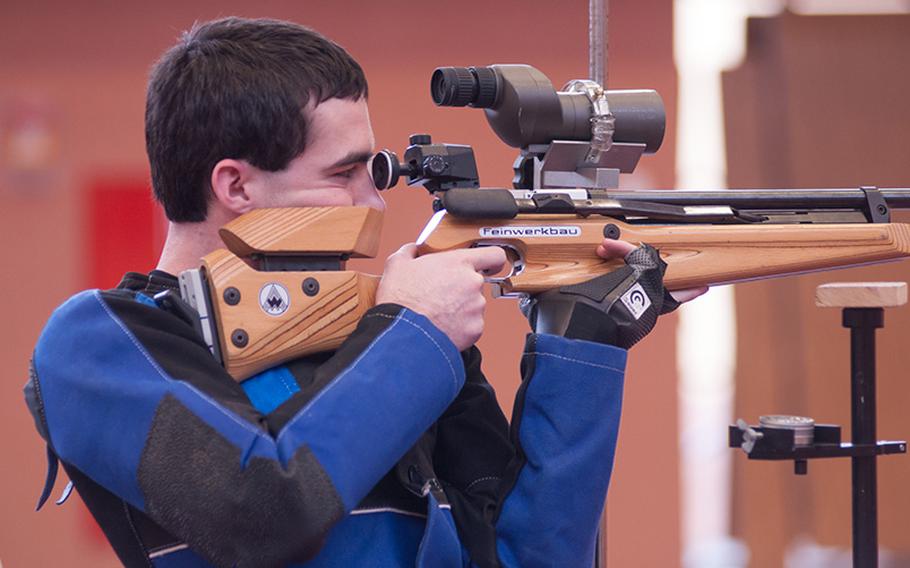 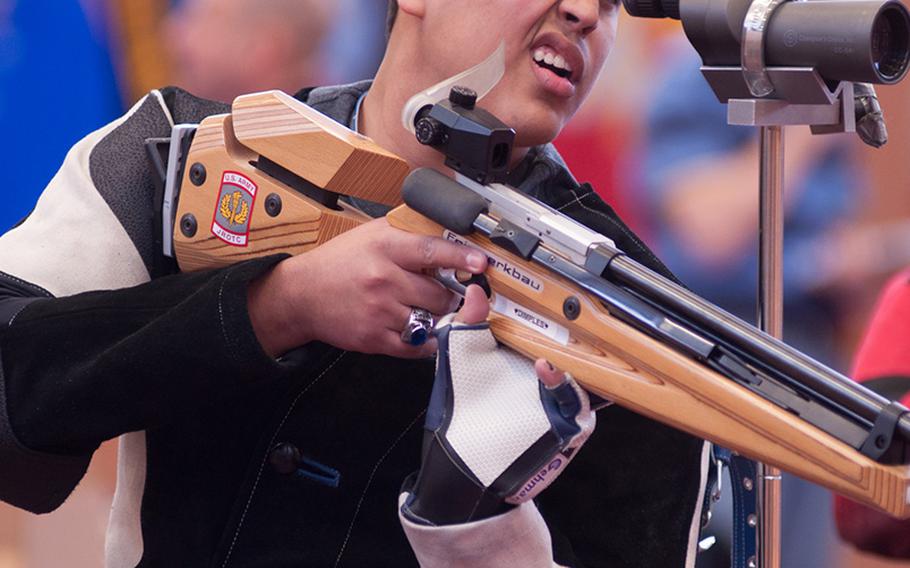 Hohenfels' Mason Saldana checks his placement during his iteration of the 2015 DODDS European Marksmanship finals at Vilseck, Jan. 31, 2015. (Michael S. Darnell/Stars and Stripes) 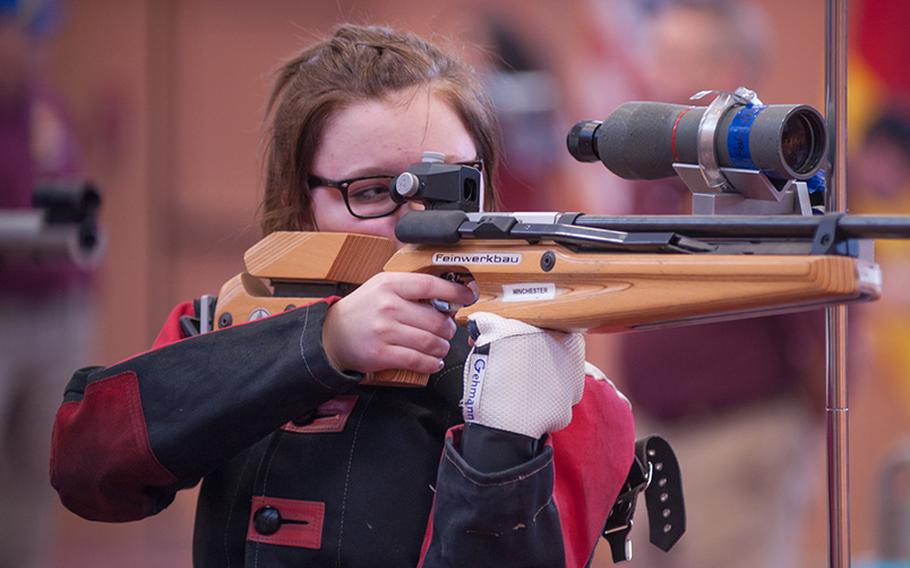 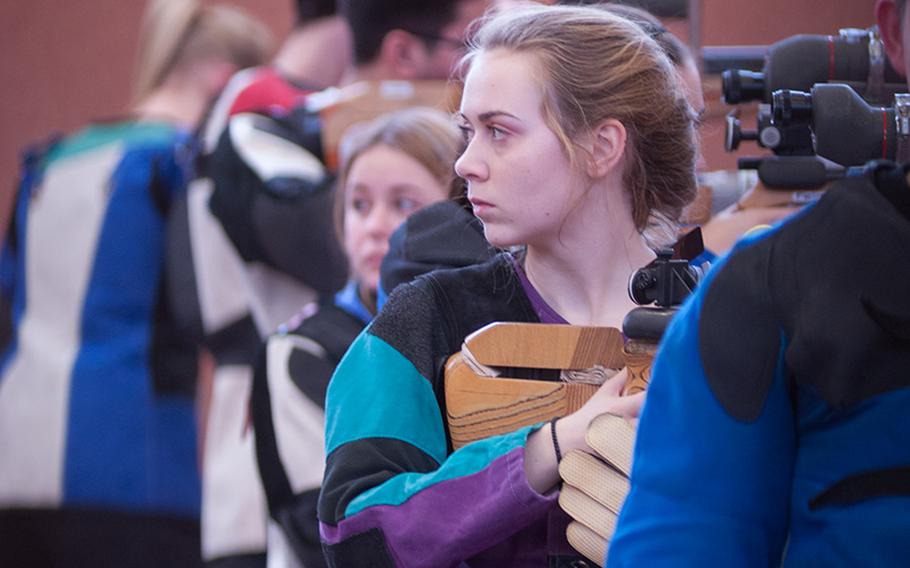 Weisbaden's Honor Stackpole checks her coach for instruction before a scoring round during the 2015 DODDS European Marksmanship finals at Vilseck, Jan. 31, 2015. (Michael S. Darnell/Stars and Stripes) 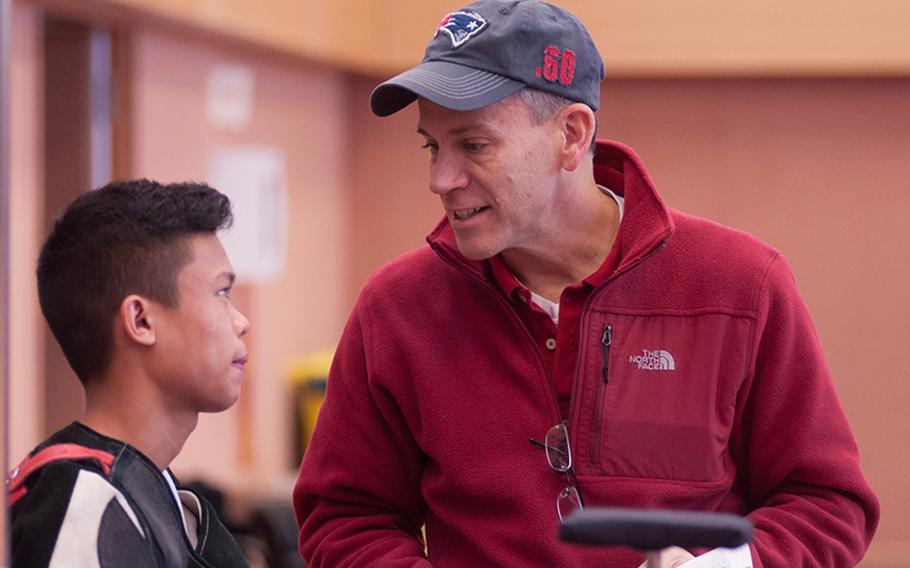 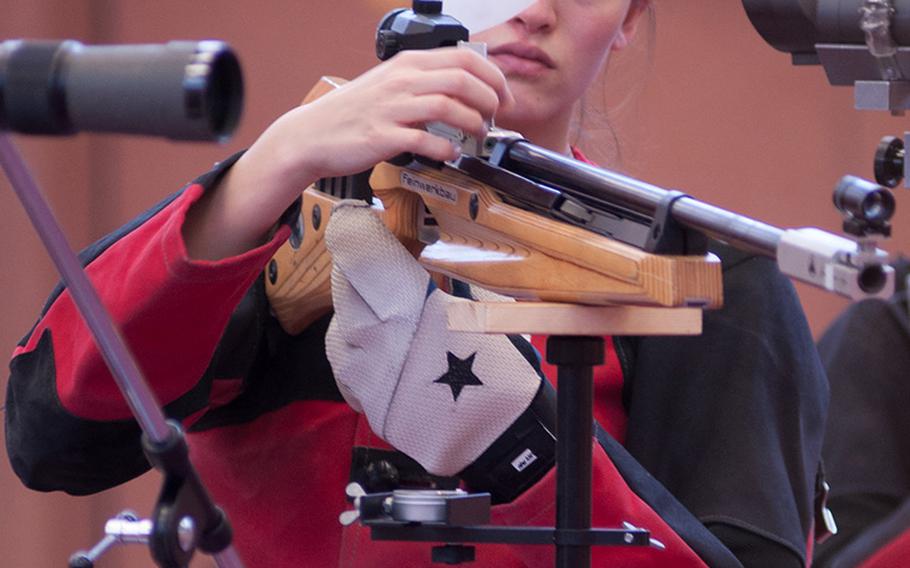 Meaghan Ambelang was one of the key shooters to Patch's runaway success at the 2015 DODDS European Marksmanship finals at Vilseck, Jan. 31, 2015. Ambelang was the third best shot of the tournament with a 294.9 overall score and she finished first in the prone with 103.2 points. (Michael S. Darnell/Stars and Stripes) 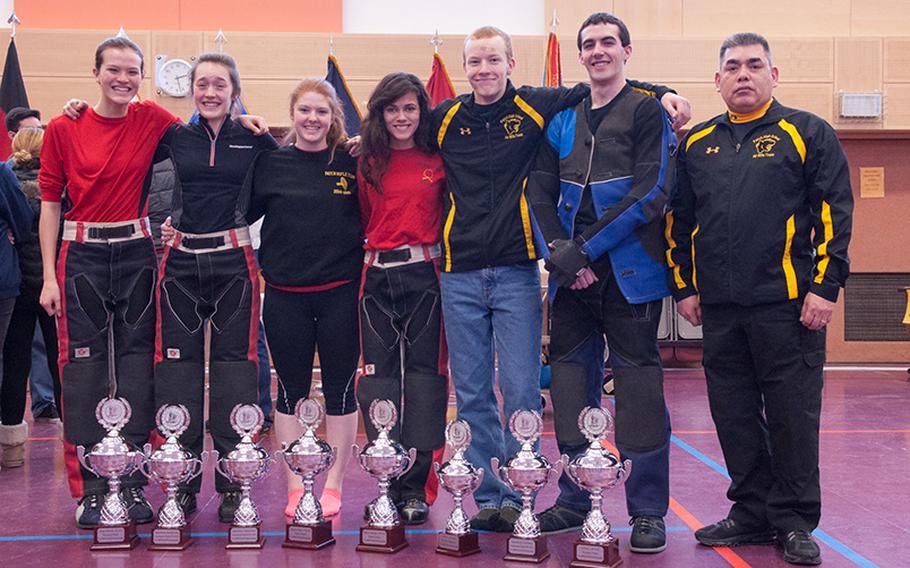 The Patch marksmanship team took home 8 trophies at the DODDS European Marksmanship Championships, including the ones for the best overall team in the league, best team in the western conference and the best overall shooter in Maggie Ehmann. From left to right: Meaghan Ambelang, Ehmann, Kaitlynn Brooks, Caelyn Miller, Robert Peterson, Lucas Gilliland and coach Raul Pinon. (Michael S. Darnell/Stars and Stripes)

VILSECK, Germany -- There came a point during Saturday’s award ceremony for the 2015 DODDS European marksmanship finals where the number of trophies Patch High School received was almost gaudy.

Patch, which seemed to have the team of the year award wrapped up even before the first pellet was fired Saturday, ended up leaving with eight trophies to add to its already impressive collection.

Perennial shooting star Maggie Ehmann was directly responsible for at least four of those. The senior won not only the individual champion with 302.7 points, but also the top honors in the kneeling position with 103 and the always difficult standing portion with 97.5.

And as if that wasn’t enough, she also defeated the next seven best shooters in a post-match “just for bragging rights” shootout. Appropriately, the final shot she took during what will be her final match at this level of competition was a bull’s-eye. Not a bad day for a shooter who at one point became visibly distraught after turning in what she thought was a subpar performance.

Ehmann’s teammates added substantially to their final tally, as well. Defending champion Caelyn Miller was the second overall shooter with 300.9 points, Meaghan Ambelang, a sophomore shooter, came in third with 294.9 and Lucas Gilliland finished fourth with 293.6.

What’s interesting about Patch’s trophy collection ceremony was that among the five other teams in the room, there wasn’t a single look of envy among their shooters. In fact, quite the opposite.

“We use Patch as a distant mentor,” Kaiserslautern coach Robert Meyer said. “The way they do things, their attitude and their focus, we took a look at that. Success breeds success.”

Apparently so, because Kaiserslautern beating out the heavily favored Vilseck squad for second overall was the lone shock of the day.

Their dark horse placement may prove to be an ill omen for the rest of DODDS Europe. Not only is Meyer’s squad young – he’s losing only one shooter to graduation – it’s also the first year Kaiserslautern has had a marksmanship team.

“We were just grateful to be here [at Europeans],” Meyer said. “So to place where we did is a shock. The kids got psyched up and they went out there and did it.”

The main performer for Kaiserslautern was the lone senior, Rolando Ferreras who took ninth place overall with 288.0 points.

“I’m proud of this team,” he said. “Just getting to Europeans was a stretch, so to come in and take second place is awesome.”

Ferreras’ team knocked Vilseck to third in the final iteration of shooting, with strong performances from Victoria Smith (287.1) and Valeria Santos (286.7). Both of those shooters will now be moving on to the All-Army Air Rifle Championships in Ohio, Feb. 13-15.

Vilseck’s top marksman was Courtney Beilhart, the lone non-Patch shooter in the top 5, with 289.4 points.

While some of the shooters from Vilseck and Patch will continue shooting at the All-Army and All-Service matches in the U.S., Saturday marked the end of several of DODDS Europe’s best shooters.

Kaitlynn Carson, Ansbach’s best shot, finished with 288.3 points in the final competition of her senior season.

“I feel kind of sad,” she said. “But not really, because we came out here as a team. They have a huge influence on me because they’re so positive.”

Carson and teammate Marina Johnson helped Ansbach take fourth. Hohenfels, which finished fifth, edged out Wiesbaden by just one shot. Katherine Gamble was Hohenfels’ top shooter with 285.9 points and Dameon Nanoccio scored the most for Wiesbaden with 289.4 points.

“It’s all the kids’ effort,” Patch coach Raul Pinon said. “I just bring them there. But now I tell them, ‘pack it up and let’s go. We have more work to do.’”