Not much at stake as Division I regular season wraps up 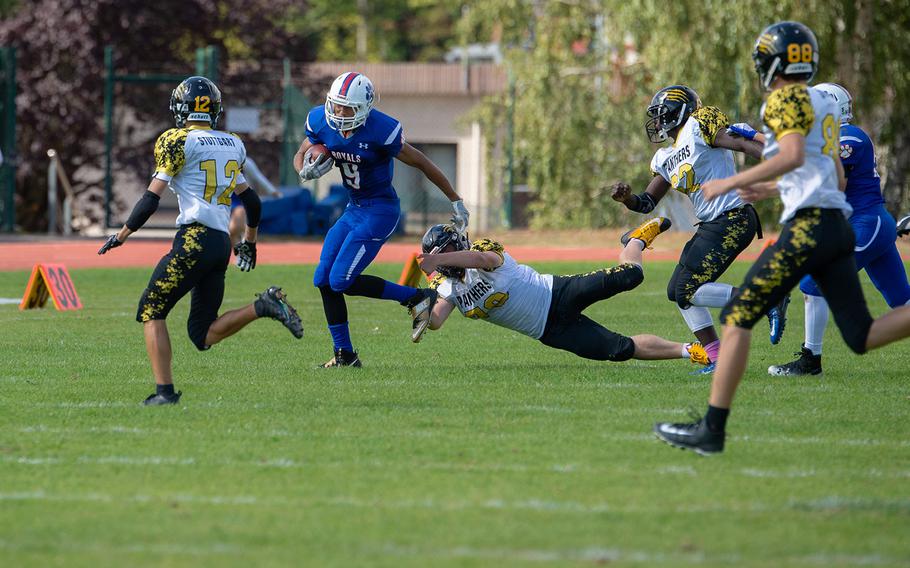 Buy Photo
Jason Jones Jr. breaks a tackle as he runs for the first down during the Ramstein vs Stuttgart football game Saturday, Sept. 15, 2018. Ramstein won the game 41-19. (Brian Ferguson/Stars and Stripes)

The final weekend of the 2018 DODEA-Europe Division I football regular season is a rather anticlimactic one.

Most items of regular-season business are handled. The four teams that will advance to the postseason, the two teams that will not, even the two hosts of the Oct. 27 semifinals have all been determined ahead of this weekend’s games.

Here’s a look at where the division’s six teams stand entering the weekend.

The Royals have been the class of Division I throughout the fall, throttling defending champion Stuttgart to open the conference season and handling all other rivals with varying degrees of ease, all by at least a 10-point margin.

The upshot of that dominant streak is that the Royals have clinched the No. 1 seed and will host the No. 4 seed in a semifinal. If they win at local rival Kaiserslautern on Saturday - they defeated their neighbor 39-8 in the teams’ non-conference season opener Sept. 8 - that would set up a rematch with the Raiders seven days later.

Like the Royals, the Lancers are locked into their playoff seed and guaranteed a home semifinal game. Second-seeded Lakenheath will face either Stuttgart or Kaiserslautern on Oct. 27 with a spot in the Nov. 3 European championship game on the line.

That renders the Lancers’ long trip to Wiesbaden the least meaningful of the weekend’s three large-school matchups. Lakenheath has nothing pragmatic to gain with a win, while Wiesbaden’s season will end Saturday either way.

The last time the Panthers won the European title, in 2015, they failed to qualify for the playoffs the following year. It looked like the 2017 champions were headed for a similar fate this fall after dropping their first two conference games to Ramstein and Lakenheath. But a two-game winning streak has earned Stuttgart the right to defend its title.

The Panthers have as much to play for as anyone this weekend, as a win at Vilseck will secure the third seed and a matchup with Lakenheath. While a long bus ride to England and a date with the formidable Lancers is hardly a reward, it may be preferable to a rematch with the Royals. Stuttgart played Lakenheath close in a 28-25 loss, but found little success against Ramstein in a 41-19 decision.

The Raiders have shaken off three years of struggles with a solid 2018 campaign, in the process earning their first semifinal berth since 2014.

Kaiserslautern will finish third and travel to Lakenheath if it beats first-place Ramstein this weekend and Stuttgart loses at last-place Vilseck. Should one or both of those games go the other way, the Raiders will drop to fourth place and head to Ramstein for a third meeting with the Royals this season.

The Warriors, after years of constant participation in the championship game or at least the semifinals, will sit out the postseason this fall regardless of their result against Lakenheath.

Even the best-case scenario - a win over the Lancers and losses by Stuttgart and Kaiserslautern - would land the Warriors in a three-way tie with the Panthers and Raiders for the third and fourth playoff berths. Wiesbaden would be the odd team out in that scenario, having lost to both schools head-to-head this fall.

The Falcons are locked into last place and will host Stuttgart this weekend in hopes of avoiding a second straight winless season.

Vilseck showed encouraging flashes this fall, giving Ramstein its toughest game of the season in a 27-17 loss Sept. 22 and holding a late lead over Kaiserslautern before taking a 26-20 loss a week later. But that string of strong showings ended emphatically Oct. 13 with a 45-3 loss at Lakenheath.