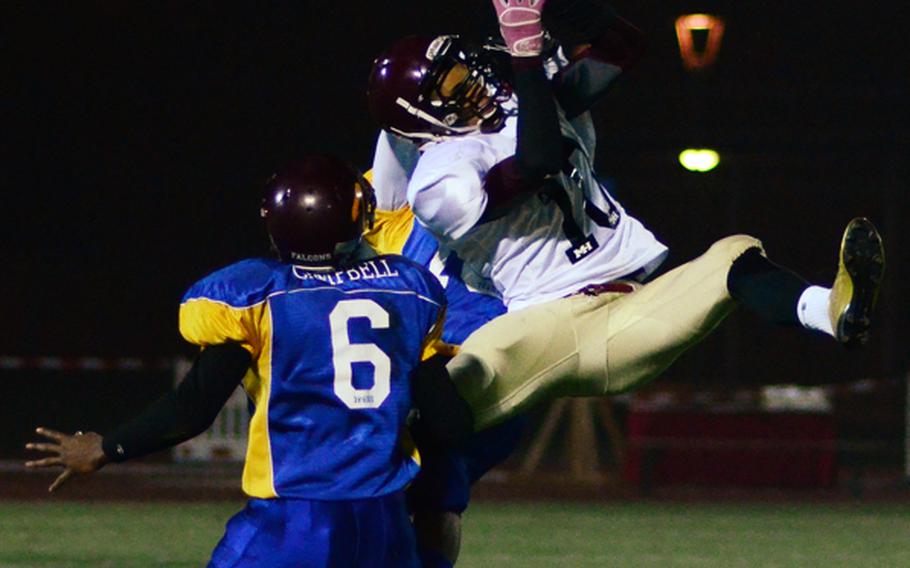 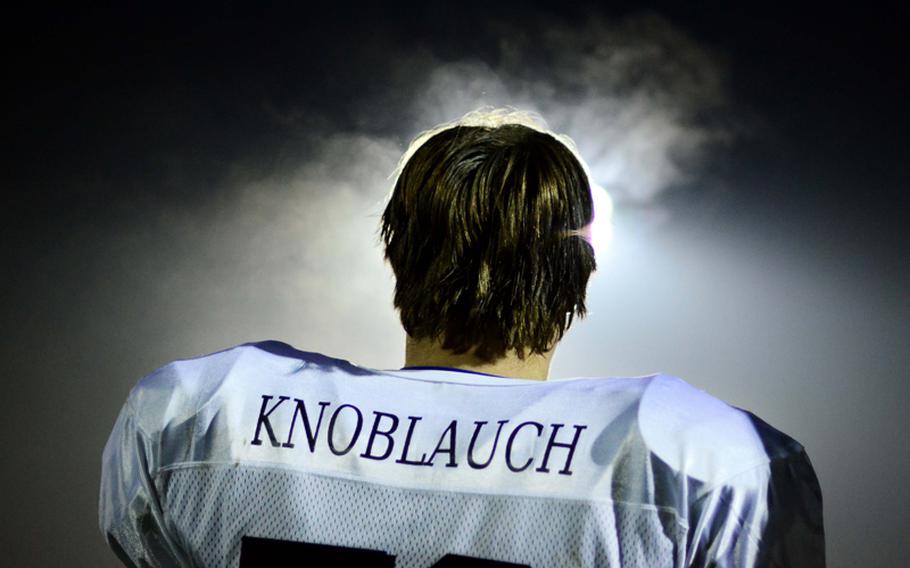 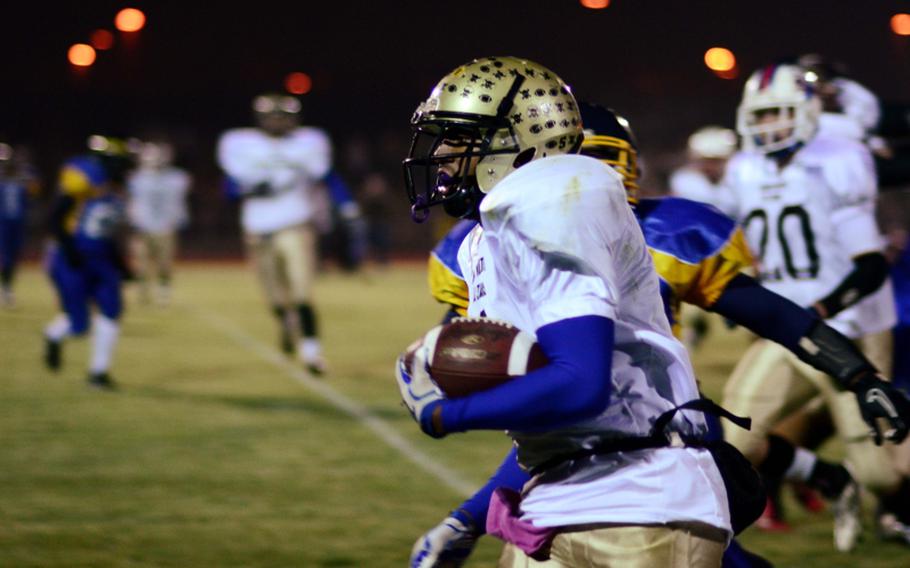 Buy Photo
Daniel Harris of Wiesbaden, playing for the North All Star Squad, gets around the corner on his way to the end zone in the DODDS-Europe high school football all star game. (Joshua L. DeMotts/Stars and Stripes) Buy Photo
Xavier Jones of Ansbach, playing for the South All Star Squad, picks up yardage in the first half of the DODDS-Europe high school football all star game. (Joshua L. DeMotts/Stars and Stripes)

GRAFENW&Ouml;HR, Germany &ndash; Here&rsquo;s what we usually get from all-star football games: bare-bones playbooks, indifference to the outcome, and guys with all the team feeling of people who, all in all, would rather be somewhere else.Think the NFL&rsquo;s Pro Bowl.If you&rsquo;re thinking DODDS-Europe All-Star Game, however, think again.Here&rsquo;s what we got from Saturday night&rsquo;s revival of the DODDS-Europe all-star game, won by Steve Jewell&rsquo;s North squad, 23-14, over Marcus George&rsquo;s South stars.First, Jewell was willing to let the dog bury those barebones playbooks in this first high school all-star tilt over here since 1982. The order of the day was the reverse &ndash; single or double and perhaps even more &ndash; and it led to big gainers that kept the North in the game. The North even completed a pass off a double reverse, a 12-yard gain from Baumholder wide receiver Ben McDaniels to All-Europe running back Daniel Harris Jr.&ldquo;We just came in to have fun,&rdquo; Jewell said after his team&rsquo;s come-from behind victory. &ldquo;At practice, we were throwing passes off triple reverses.&rdquo;The double-reverse completion kept alive a drive eventually ended by the halftime gun, but which gave the South defense, geared to stop the punishing running of Harris and Ramstein&rsquo;s Jon Grotelueschen, plenty to think about at halftime. At that point, the South led, 14-6, on the strength of a 17-yard touchdown pass and a 6-yard run by a guy who&rsquo;d already gained more than 1,800 yards coming into the game. The pass-and-catch down the left sideline by the Heidelberg duo of All-Europe quarterback Kevin Gray and wideout Calvin Baisden capped an eight-play, 74-yard drive on the South&rsquo;s first possession of the game; Ansbach&rsquo;s Xavier Jones&rsquo; power run over left tackle cashed in a North fumble the South recovered on the North 46-yard line.Unsuspected by the crowd, however, was the fact that Jones&rsquo; TD would be the last one of the game for the players in blue jerseys.Some inspired defensive play saw to that. The outcome mattered plenty to the defenders in the white jerseys, especially Vinny Culotta of the International School of Brussels.&ldquo;I was thinking during the week that he&rsquo;s too small to play strong safety,&rdquo; Jewell said. &ldquo;One night, he was in the bunk next to me and he told me that he mirrored Xavier Jones when they played Ansbach and held him to 50 yards. That little guy mirrored Jones! So we gave him the opportunity to play, and he was a monster. He made some great open-field tackles.&rdquo;Jewell credited Lakenheath coach Matt Martinez with his team&rsquo;s success in containing the South.&ldquo;He&rsquo;s a great defensive coach,&rdquo; Jewell said. &ldquo;He had, what, about 29 minutes to put in a defense? They were great.&rdquo;How great? The North attacked so well that the South punted three times, fumbled once and was held on downs on their first five possessions of the second half. The South&rsquo;s final possession came with 15 seconds left in the game.Harris scored the North&rsquo;s lone first-half TD, a 16-yard burst with 9:56 to play in the second quarter. The South stuffed an attempted two-point run by 285-pound Darian Billups of Bitburg, but the All-Europe tackle wasn&rsquo;t through. He would later crash over from the 2-yard line on a fourth-down run that gave the North the lead for good in the third quarter.In between the two North scores was the play of the game, a breathtaking, tackle-breaking 59-yard run by Bitburg&rsquo;s junior All-European Kyle Edgar. Edgar broke the play over right tackle, ran through and past would-be tacklers en route to the left sideline and dashed into the end zone.Adam Garcia, a Lakenheath senior, kicked the extra point that brought the North to 14-13 down. Garcia later iced the game with a 43-yard field goal, his career long, with four minutes to go. There was no rush allowed on the try, as well as punts, in this game, but the kick was plenty clutch anyway.&ldquo;It was a hard-enough kick to make, even without the rush,&rdquo; Garcia said.Jewell credited his Bitburg contingent of Billups, Edgar, Colton Engelmeier, Austin Schmidt and Shaquille Williams for infusing his team with that rarest of all-star commodities, team feeling.&ldquo;Those Bitburg kids have great personality,&rdquo; Jewell said. &ldquo;They helped make our team a team, in Bitburg fashion. I don&rsquo;t think we would have come together as much as we did without them.&rdquo;For most of the all-stars, South or North, Grafenw&ouml;hr was the place to be on Saturday. No Pro Bowl here.&ldquo;I had fun,&rdquo; said Dakota Deverill of Brussels, who has just received his appointment to the Naval Academy. &ldquo;It was well worth it. I came out of it a better football player.&rdquo;bryanr@estripes.osd.mil