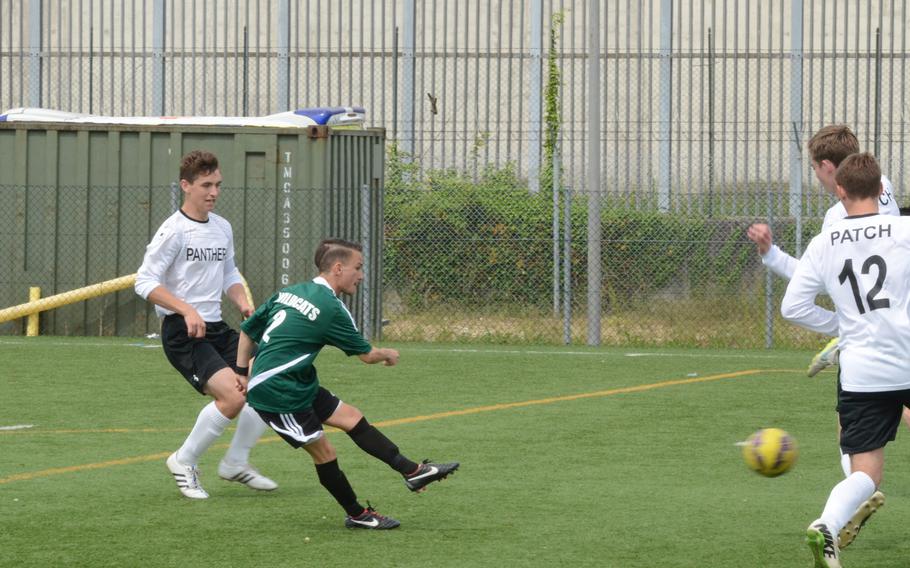 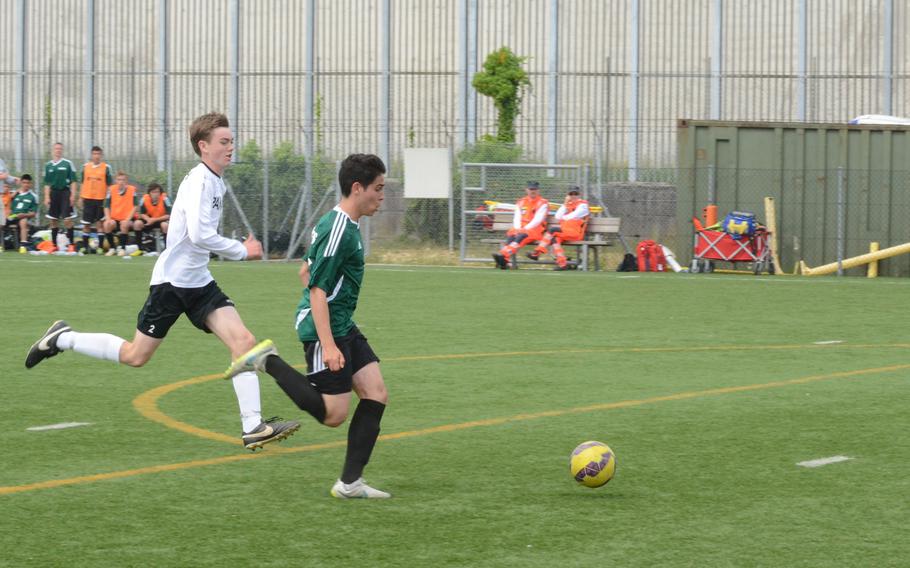 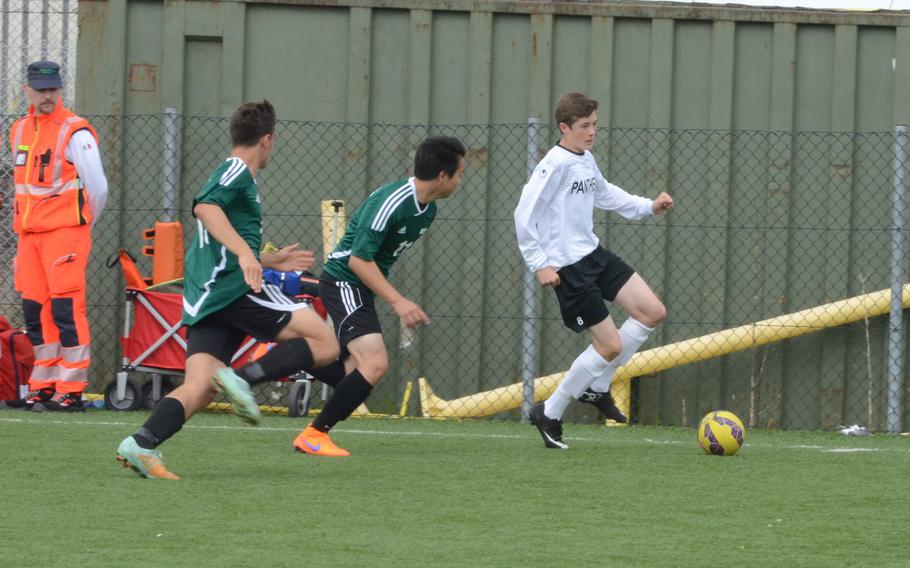 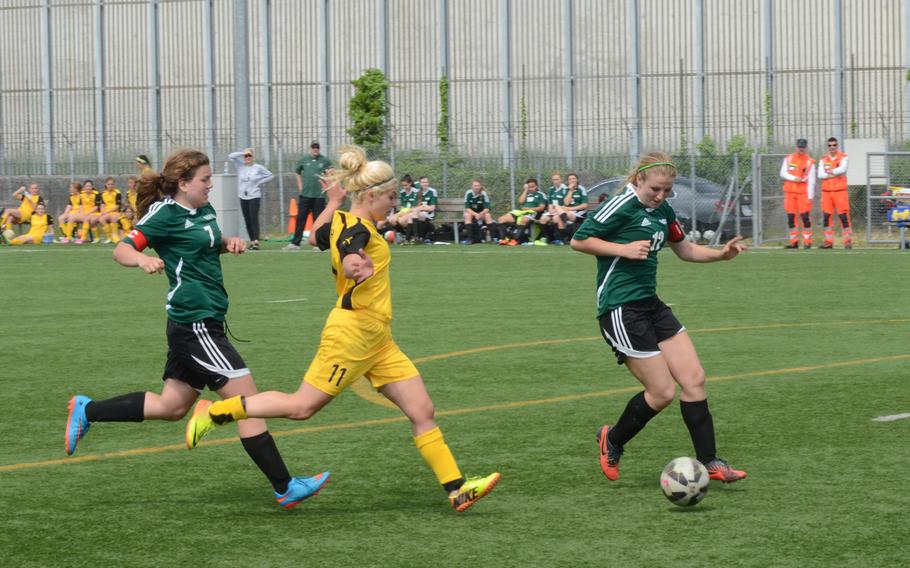 Buy Photo
Patch's Kaitlyn Farrar readies to kick the ball Saturday during a game against Naples at Vicenza, Italy. The kick became one of two goals for Farrar. (Jason Duhr/Stars and Stripes) 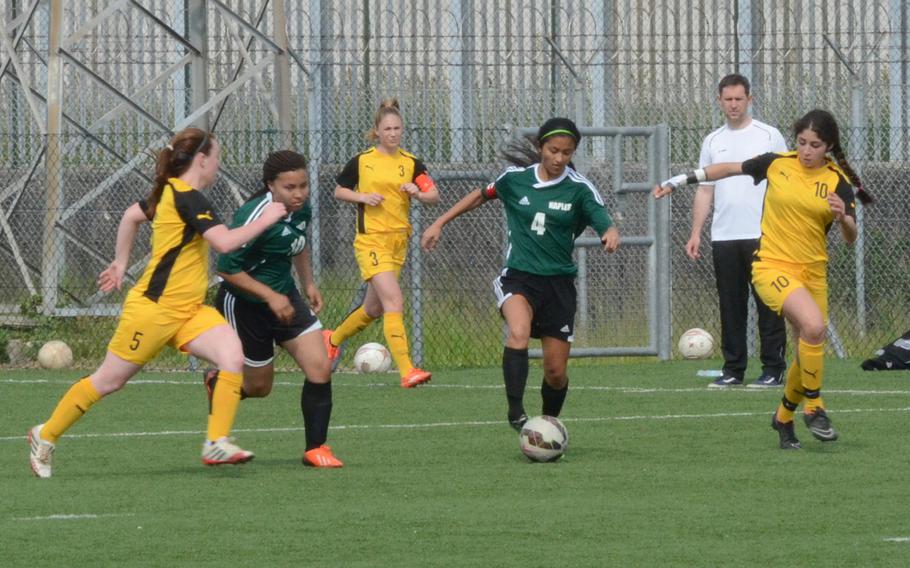 Buy Photo
Naples' Amanda Ortega maneuvers through a sea of players Saturday during a game against Patch at Vicenza, Italy. (Jason Duhr/Stars and Stripes) VICENZA, Italy – It took a team based in a different country to ruin the Patch Panthers chances at an undefeated season Saturday.

“The boys were really hoping to remain undefeated throughout the year,” Patch coach Eugene Macadagum said following a 2-0 loss to Naples. “But they didn’t come expecting to win either, because the boys knew they were playing a team they hadn’t played before.”

Playing against a non-Italy team for the first time in Division I, the Wildcats put the heat on the Panthers early on in the second half with a goal by Miguel De Frutos following a frustrating first half.

“We got the momentum from there and our athletes are well conditioned and they can go the distance,” Naples coach Chris Hanson said.

The teams remained locked at zero during the first half as they both struggled to put one between the posts. “Our goal was to shut down their offense,” Hanson said.

And shut it down the Wildcats did.

The Panthers took seven shots on goal, which keeper Nathan Cairns managed to contain, but not all credit can go to Cairns. Teammate Matteo Alessandro Pugliese had contact with the ball more often than any other player on the field, heading the ball and clearing it out away from Cairns repeatedly.

On the other end, Wildcat forward Davide Di Costanzo pumped up the Naples’ bench following a performance that would culminate with the final goal of the game.

“The way he danced with the ball out there,” Hanson said of Costanzo. “His ball handling is just outstanding.”

Assisted by Marcello Esposti, Costanzo dribbled the ball from midfield past the Pather defense and targeted a gap between the keeper and post.

Macadagum attributed part of his team’s problem as starting out “flat in the second half” and the Wildcats ability to “expose our defenses’ weaknesses.”

“Clearly Naples had a better game than we did today,” Macadgum said.

Patch girls 5, Naples girls 1: It was evident early on who the superior team was on the field when the Panthers set foot on Vicenza’s turf.

“I think Patch is clearly a very strong team,” Naples coach Rebecca Lucy said. “We have some work to do.”

The Panthers closed out the first half confidently securing a lead of 4-0.

“I was hoping for a 1-0 lead at half,” Patch coach Daniel Coapstick said. But two goals from Janey Greenberg and one each from Danielle Mannier and Kaitlyn Farrar provided much more than that.

And Farrar deemed it necessary to tack one more nail on in the second half.

“The scores suggest we were more dominant,” Coapstick said. “This was a more even game, we just converted our goals.”

Mannier, who pushed two goals against Vicenza on Friday and her sister Whitney Mannier accounted for another in a 3-0 win over the Cougars.

“Even though the trip was strenuous, it was a long way to travel,” Coapstick said. “Both teams really gave us a challenge this weekend.”

Patch travelled down with a full roster of 21 girls, one attribute Lucy said benefits the Panthers.

“They have great depth and can sub their lineup two or three times,” Lucy said.

The Panther’s depth didn’t stop the Wildcats’ Jillian Thurston from scoring in the second half, though, avoiding the shutout.

Following the loss, Lucy said she wasn’t going to let the loss get her team down.

“Every soccer opportunity is an opportunity to learn and work on something better,” Lucy said. “And they haven’t seen the last of us.”