The Raiders’ Glen Alexander goes up for a layup during the 2015 DODDS-Europe basketball season opener in Ansbach, Germany, Dec. 4, 2015. Kaiserslautern edged out the Ansbach Cougars 57-50. (Michael S. Darnell/Stars and Stripes)

The Raiders’ Glen Alexander goes up for a layup during the 2015 DODDS-Europe basketball season opener in Ansbach, Germany, Dec. 4, 2015. Kaiserslautern edged out the Ansbach Cougars 57-50. (Michael S. Darnell/Stars and Stripes) Kaiserslautern’s Destiny Luckey drives to the basket during the opening game of the 2015 DODDS-Europe basketball season. The Raiders shutout the Ansbach Cougars in the fourth quarter as Kaiserslautern breezed through the season opener, defeating the home team 35-12, Dec. 4, 2015. (Michael S. Darnell/Stars and Stripes) 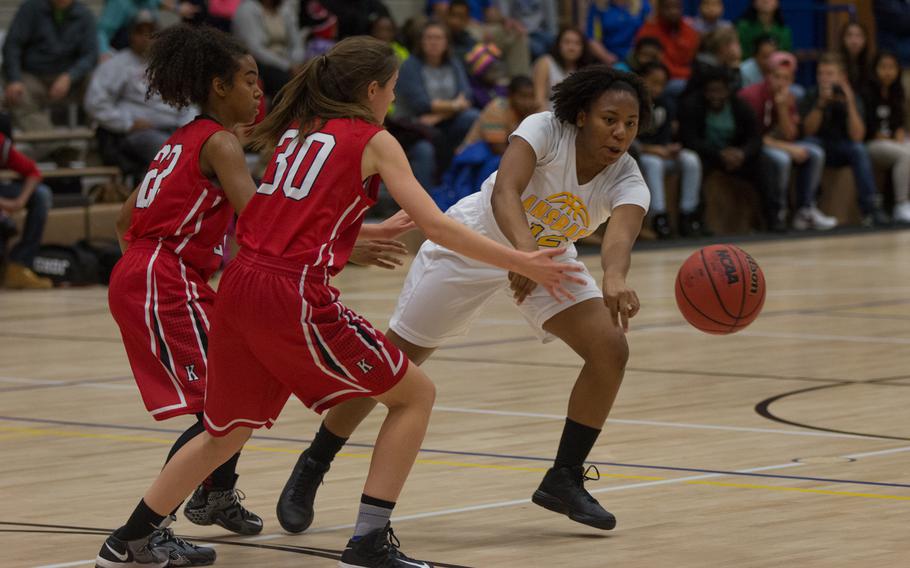 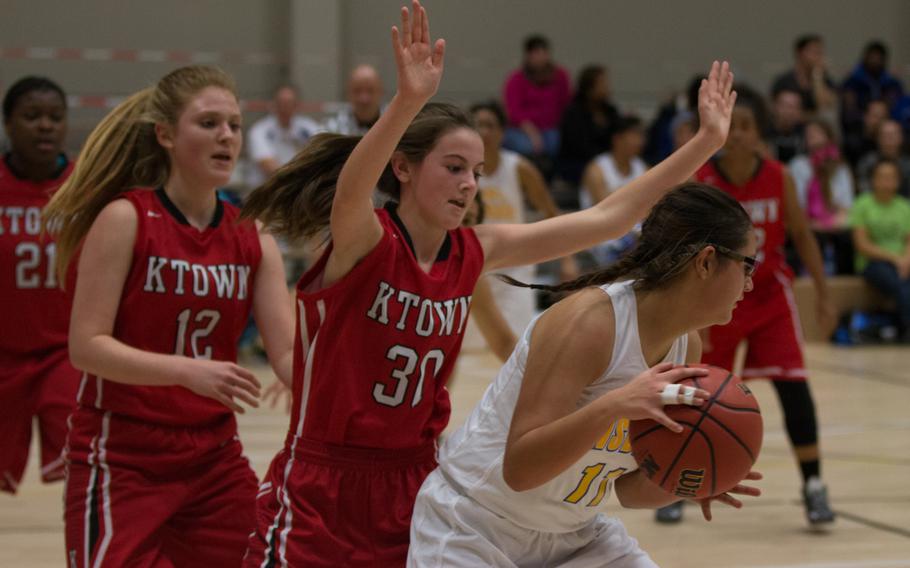 Glen Alexander scored 13 for the Raiders as Kaiserslautern edged out the Ansbach Cougars in a cross division DODDS-Europe basketball opener in Ansbach, Germany, Friday, Dec. 4, 2015. (Michael S. Darnell/Stars and Stripes) ANSBACH, Germany – The Kaiserslautern Raiders left the Ansbach Cougars’ court on Friday one part exhilarated, one part tired and one part just a wee bit shocked.

After all, they, being a DODDS-Europe Division I basketball powerhouse, were opening their season against a Division III squad so shallow on the bench they’re filling spots with junior varsity players.

While the Raiders did come away with the victory, edging out the Cougars 57-50, it was a much tighter game than anybody expected. Well, anybody except the Cougars.

“We thought we had a good chance,” said returning junior Yadiel Rodriguez. “We were down by ten, and came back up; yeah, we lost by seven but we kept fighting.”

In fact, the Cougars went into the half up by two thanks to a last-second drive by Rodriguez, who ended the game with 13 points. He was only outshone on offense by newcomer Lamar Finley, who tallied 17 points in his first game for the Cougars.

The second half, though, belonged entirely to the Raiders.

Glen Alexander and Jayden Jones scored 13 apiece for Kaiserslautern, with 11 of Jones’ points coming after the break. Robert Brown was instrumental on defense, disrupting nearly every Ansbach touch in the second half.

The Cougars will get their shot at revenge on Saturday as both teams face off once again in Ansbach. Head coach Mike Ellyson said his team is more than capable of pulling out the upset. Especially if his bench continues to punch above their weight class.

“We had a couple of guys step up tonight,” he said. “I was real thrilled.”

The Raider girls also opened their season with a win, defeating the Cougars 35-12. Once again, while K-Town gets the tally in the win column, the Cougars said they’re more than happy with their team’s performance. In fact, they looked just as happy as the winning squad.

“We did a lot better than I expected,” said Liena Tatum. “We’re DIII and doing what we did against a DI team is phenomenal I think, because most of these girls have never played. We had three girls on the varsity team that have never played before and they showed up today.”

While the Cougars acquitted themselves nicely, they couldn’t match the twin threats in Althea Honan and Le’jhanique Brown, who combined for all but two of their team’s points. After a slow first quarter in which the Raiders only put up six, they came out firing on all cylinders. Their stifling defense matched nicely with their offensive production, resulting in a complete shutout in the fourth quarter.

“I was a little nervous coming out for the first game of the season, towards the second quarter I collected myself,” Honan said. “I think once our offense started to flow, once we looked up and started looking for the open person and our defense came together. “

They’ll have another chance to knock some more of the early season rust off on Saturday as the two teams meet once again.

“We did really good,” Brown said. “All this practice and all this hard work … it couldn’t have been for nothing.”