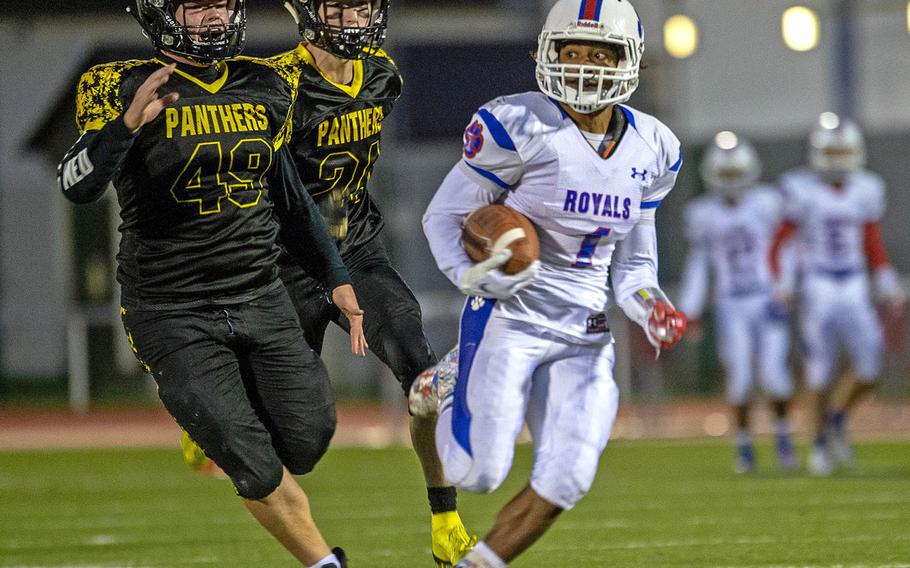 Buy Photo
Ramstein's Dominque Arizpe breaks into the open field against Stuttgart in last season's Division I championship game in Kaiserslautern, Germany. The 2020 football season has been cancelled due to the coronavirus. (Brian Ferguson/Stars and Stripes)

The 2020 DODEA-Europe fall athletics season will be profoundly changed by the coronavirus pandemic. And just how much is yet to be determined.

DODEA-Europe athletic director Kathlene Clemmons provided further details on preparations in a phone interview Thursday, a day after the organization’s official announcement confirming the cancelation of the fall football season.

Football won’t be played this fall.

Clemmons said her “heart breaks” for the many student-athletes denied the annual ritual of taking to the DODEA-Europe gridiron, but said the decision was necessary for student safety.

“I feel terrible that we’ve had to eliminate a sport,” Clemmons said. “But it’s the right thing to do.”

Clemmons declined to engage in any speculation about the potential for rescheduling football in the spring, reiterating that decisions regarding the winter and spring seasons have not yet been made.

“All I will say is that it’s officially canceled for the fall,” Clemmons said. “I really can’t comment on the possibilities after that.”

Major structural obstacles exist that might make the idea of football in the spring unworkable.

The DODEA-Europe spring athletics season, the 2020 edition of which was canceled in its entirety due to the pandemic, typically includes major team sports including boys and girls soccer, baseball and softball, as well as track and field. Squeezing another major sport onto that calendar would create a host of logistical problems and many schools would struggle to produce enough student-athletes to field teams.

Volleyball is up in the air.

Clemmons said there’s still no official decision on volleyball, the other team sport typically offered in the fall.

“We do not have a 100 percent answer for volleyball yet,” Clemmons said.

Golf, cross country and tennis will play on, with some changes.

Cross country will take place with “modifications that will follow the guidelines of social distancing,” notably to create space at crowded starting lines. Singles tennis will happen “for sure,” Clemmons said, while the doubles version is still being discussed. Play on golf courses can continue with little adjustment.

Cheer will proceed even in the absence of games.

DODEA-Europe will offer fall cheerleading despite the dearth of games at which to perform. Clemmons said that cheer programs will need to minimize multiple-person maneuvers and stunts, but that their season doesn’t need to be fully tethered to that of their schools’ football teams.

Details about the nature of that season, however, remain to be determined.

“They can still go out and practice,” Clemmons said. “Will they cheer anywhere? I don’t know.”

The season may start late, and schedules will look different.

Official schedules for the fall aren’t expected until early to mid-August, but they’re likely to look different from previous seasons in a couple of key ways.

First, Clemmons said the season may start later than usual as staff and administrators adjust to the new circumstances.

“We don’t want to just jump right into it,” Clemmons said. “We want to make sure... that all of the protocols that are put in place are working successfully before we just roll back into it.”

Scheduling transportation to and from sporting events requires a similar level of caution, and it’s unlikely teams will travel as extensively as they did in more conventional DODEA-Europe seasons.

“There are many working parts,” Clemmons said.

DODEA-Europe is preparing a football alternative.

Clemmons made reference to an “alternative fitness activity” for sidelined student-athletes, though she chose not to elaborate on the nature of the activity until the concept is fully formed and ready for implementation.

While repeatedly expressing regret about student-athletes left without a team, Clemmons said DODEA-Europe’s goal is to get as many kids as involved as the situation allows.

“They can be part of a team,” Clemmons said. “I think that’s what’s most important right now.”

The vast majority of schools are set to open Aug. 24. Last year's fall sports season started on the second weekend of September.