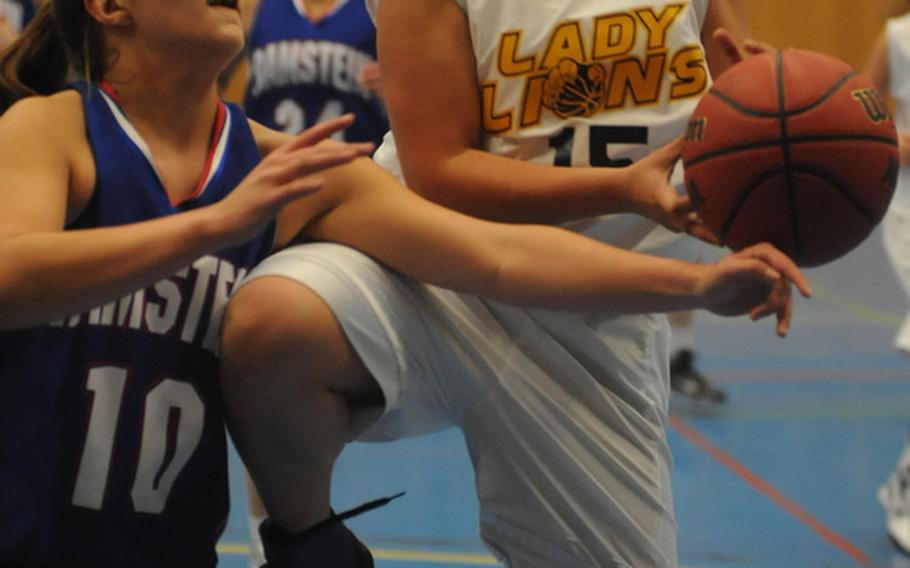 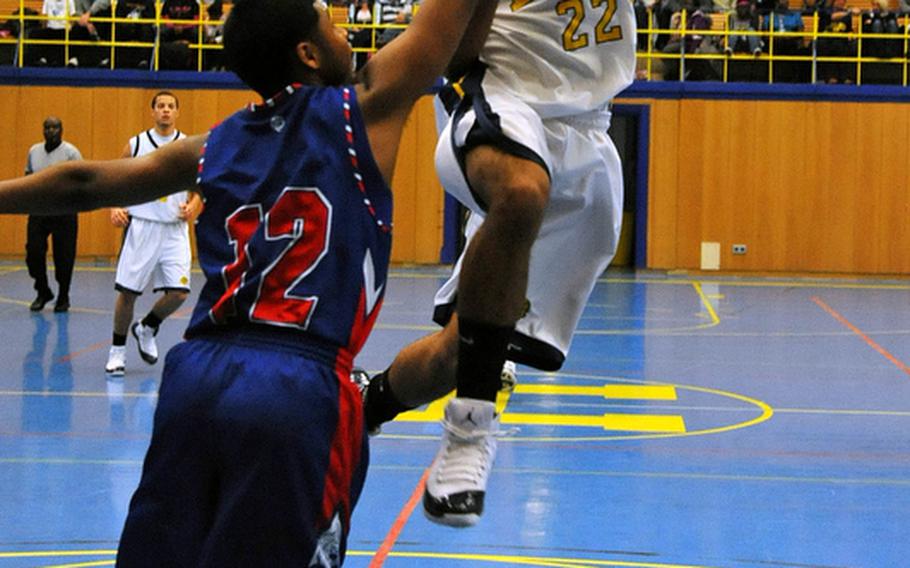 Heidelberg's Kevin Gray goes to the basket against the defense of Ramstein's Will Dorsey in high school action in Heidelberg Friday night. (Michael Abrams/Stars and Stripes) HEIDELBERG, Germany &ndash; There wasn&rsquo;t all that much on the line in Friday&rsquo;s non-regional games.But anyone who watched the Ramstein girls down slow-starting Heidelberg 50-34 and Heidelberg&rsquo;s boys top Ramstein 47-40 saw Division I-tournament intensity throughout from the archrival squads.

Ramstein girls 50, Heidelberg 34The foretaste of February was fully on display in the opener, which saw Ramstein go ahead 14-2 in the game&rsquo;s first 10 minutes 4 seconds. In the face of Ramstein&rsquo;s active hands and feet, Heidelberg missed its first six shots from the floor and turned the ball over seven times in the game&rsquo;s first eight minutes. &ldquo;It was more important to be aggressive,&rdquo; said Ramstein center Katherine Enyeart about her team&rsquo;s physical style on Friday that put their hostesses in the one-and-one with seven minutes left in each half, &ldquo;than it was to worry about fouls.&rdquo;For their part, the Lady Royals weren&rsquo;t exactly shooting out the lights from the opening tip, going 4-for-12 from the floor in the first quarter.Kateri Goldammer, who scored five of her game-high 11 points in the first eight minutes, blamed jitters for the slow start.&ldquo;We were excited, tense,&rdquo; she said. &ldquo;When we warmed up a bit, we got our chemistry going.&rdquo;Much of the chemistry revolved around All-Europe senior Mackenzie Crews, who led all rebounders with 11 and handed out seven assists. Enyeart and Jasmine Young grabbed 10 rebounds each as Ramstein rebounded from Tuesday&rsquo;s one-point loss on a free throw with time expired at Kaiserslautern.There was no holdover from that experience on Friday, said Enyeart, whose team improved to 3-2 overall going into Saturday&rsquo;s game against visiting Bamberg. Heidelberg, which next plays at Hohenfels on Jan. 20-21, fell to 3-1.&ldquo;We knew our team was strong,&rdquo; Enyeart said. &ldquo;We just had to go out and play.&rdquo;

Heidelberg boys 47, Ramstein 40The defending D-I champs took control of the scoreboard with an 8-0 run in the final minute of the first half, but it was the defensive effort, especially in the second period when the Lions held Ramstein to just five points, that proved decisive.&ldquo;Defense won the game,&rdquo; said All-Europe senior Sam Rosario, who scored 11 points to help Heidelberg to its third straight win over Ramstein, its opponent in the last five European D-I title games. Heidelberg won the European crown last year and in 2007and 2008, and Ramstein claimed the title in 2009 and 2010. In addition to the 2011 title game, won by Heidelberg 73-51, the Lions downed Ramstein 67-58 in last month&rsquo;s title game of the Patch Winter Tournament.Heidelberg&rsquo;s Marcel Simon (14 points) said the victory at Patch, which doesn&rsquo;t count in the standings, did help the Lions improve to 4-0 overall with their 11th straight victory.&ldquo;We saw what we are up against this year,&rdquo; he said as his twin brother Maurice added, &ldquo;We knew they were without a couple of players in Stuttgart, so Coach (Ron) Merriwether has us practicing harder every day.&rdquo;Maurice Simon scored seven points on Friday and led his team in rebounding with eight and assists with four. Marcel Simon said that those previous defeats of Ramstein added to the physicality of Friday&rsquo;s showdown.&ldquo;It&rsquo;s a big rivalry,&rdquo; he said. &ldquo;They really want to beat us.&rdquo;For the second straight game, 6-foot-7 senior Sam Wetlesen led Ramstein&rsquo;s scoring, this time with 15 points. He poured in 21 in Tuesday&rsquo;s 76-70 home victory over Kaiserslautern. Ramstein&rsquo;s next shot at Heidelberg probably will come in February, when the European D-I tournament moves to Wiesbaden after a 61-year run at Mannheim.Rosario, for one, wouldn&rsquo;t be surprised if the two teams will be contesting the D-I title for the sixth straight time.&ldquo;We&rsquo;ll see them again,&rdquo; he said.bryanr@estripes.osd.mil