Half of semifinal spots clinched on first day of action 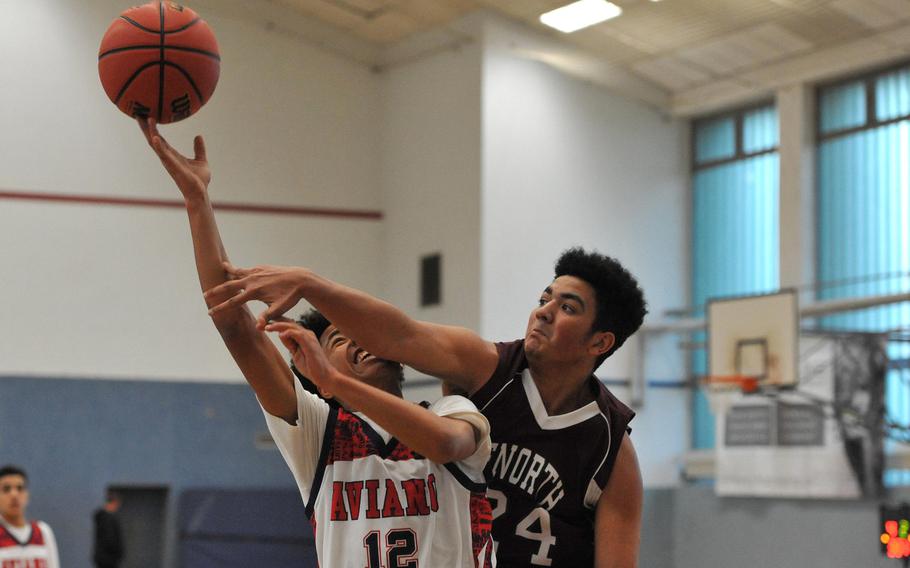 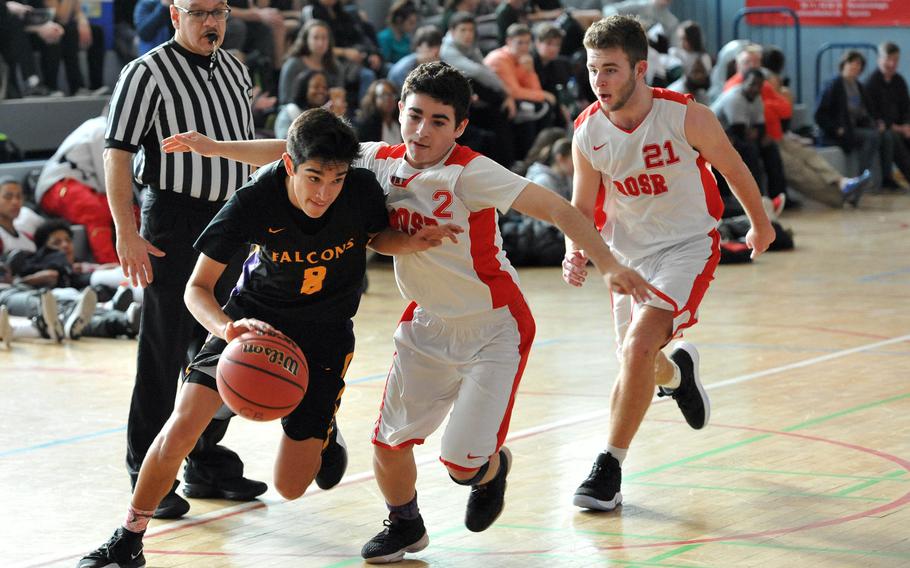 Hohenfels' Deshawn Herold-Adams get a jumper off against the Brussels defense in a Division III game at the DODEA-Europe basketball finals. Brussels won 42-48. (MICHAEL ABRAMS/STARS AND STRIPES) Brussels' Jalen Pollard scores the go-ahead basket in the Brigands' 42-38 Division III win in a game at the DODEA-Europe basketball finals. (MICHAEL ABRAMS/STARS AND STRIPES) Sigonella's Gregory Neal finishes a fast break in the Jaguars' 66-27 loss to Spangdahlem in a Division III game at the DODEA-Europe basketball finals. (MICHAEL ABRAMS/STARS AND STRIPES) Spangdahlem's Eddie DeJesus looks to pass to a teammate against Sigonella's Sean Solano and Kamren Ferguson, right, in a Division III game at the DODEA-Europe basketball finals. Spangdahlem won 66-27. (MICHAEL ABRAMS/STARS AND STRIPES) 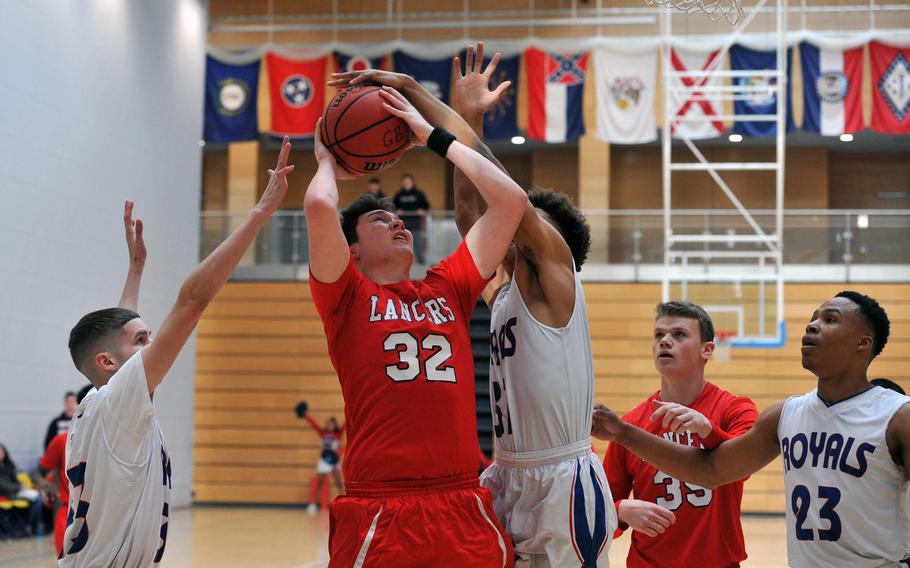 Lakenheath's Daniel Uelmen tries to get a shot off against Ramstein's Luis Santiago, left, and Jason Jones Jr. in a Division I game at the DODEA-Europe basketball finals. Ramstein won 49-37. Watching the action are Adam Woolley and Naser Eaves, right. (MICHAEL ABRAMS/STARS AND STRIPES) 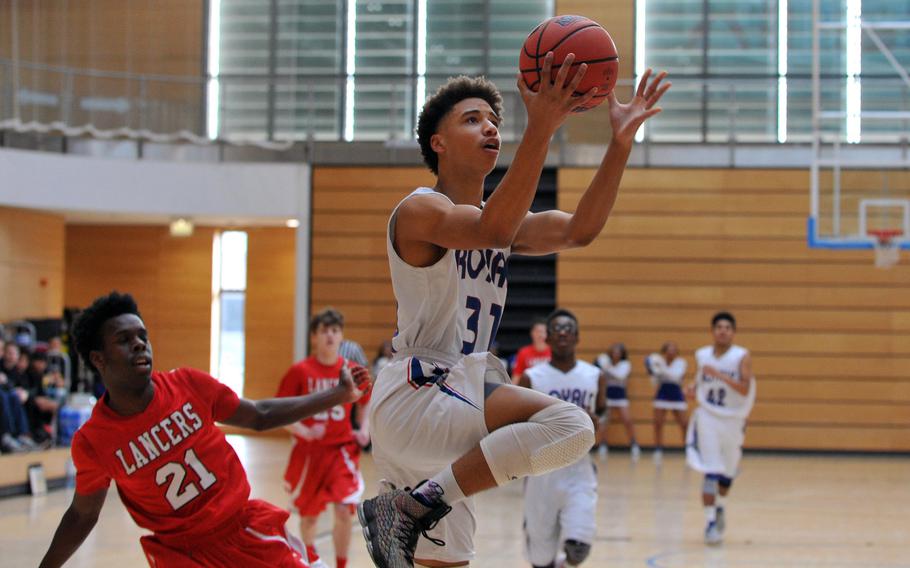 Ramstein's Jason Jones Jr. takes it to the hoop after getting past Lakenheath's Kyrie Sloan in a Division I game at the DODEA-Europe basketball finals. Ramstein won 49-37. (MICHAEL ABRAMS/STARS AND STRIPES) 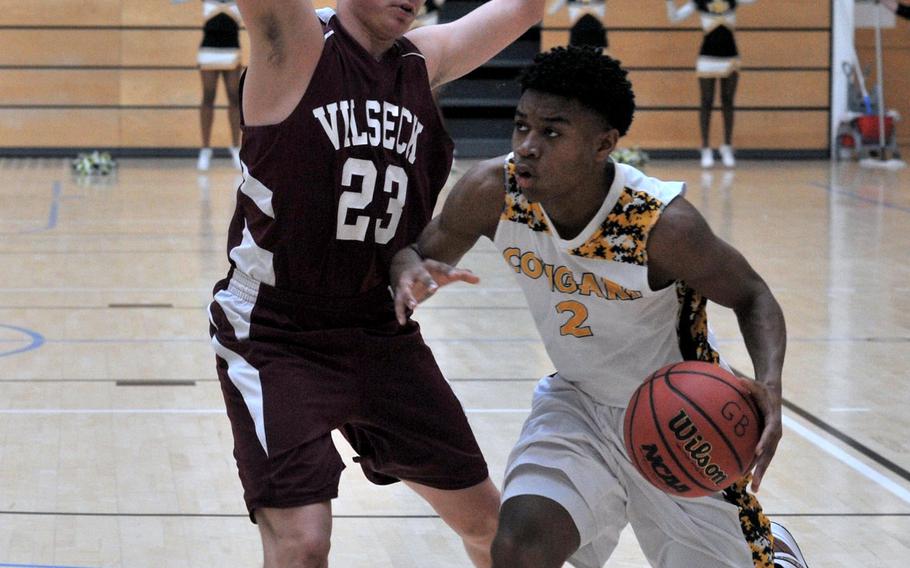 Vilseck's Cameron Gaetos passes off to a teammate against Vicenza's Jayden Owens, left, and Kai're Grant in a Division I game at the DODEA-Europe basketball finals. Vilseck won 58-42. (MICHAEL ABRAMS/STARS AND STRIPES) 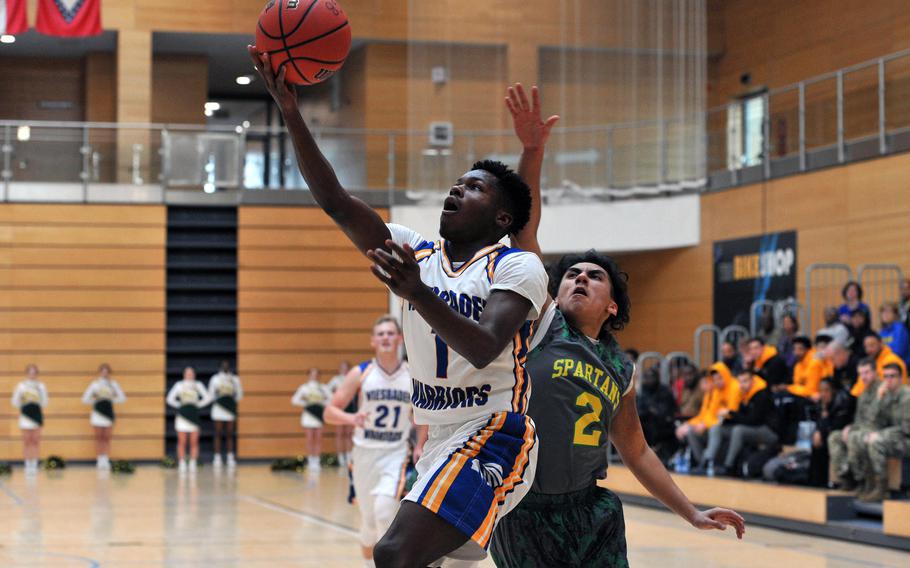 Wiesbaden's Keyon Allan gets past SHAPE's Jarod Gallegos in a Division I game at the DODEA-Europe basketball finals. Wiesbaden won 54-22. (MICHAEL ABRAMS/STARS AND STRIPES)

WIESBADEN, Germany - It didn’t take long for half the field to separate itself on the opening day of the DODEA-Europe boys basketball championships.

Unbeaten Ramstein and Stuttgart each won twice to earn spots in Friday’s semifinals in Division I play. Black Forest Academy and Bahrain needed only a win apiece to book their spots in the final four for Division II. And Ansbach and Brussels advanced with a pair of triumphs apiece in Division III.

Pool play continues Thursday in gyms across Wiesbaden, as six more teams will fill out the field for the right to play in Saturday’s championship games.

Division IStuttgart wins twice: The Panthers upended the No. 5 seed from Naples, 45-29, during their first game of the day.

Sabriel Ashley pushed his team to a win by scoring 15 points.

In their second game, the Panthers took on Lakenheath and came out victorious with a score of 41–32.

Although Stuttgart struggled with accuracy for much of the game, Lakenheath was not able to defend when needed. The Lancers began to close the gap and ended the third quarter at 26-24, but Stuttgart pulled away from there.

Ramstein stays perfect: The top-seeded Royals continued their unbeaten season with a pair of easy victories.

Ramstein eliminated Naples from advancing with a thorough 72-32 triumph after opening with a 49-37 win over Lakenheath.

Ramstein coach Andrew O’Connor was pleased with the team’s efforts.

“We had a rough start, but it’s the first day of the tournament, that usually happens,” O’Connor said. “We try not to read into the first game. You win by 40 or you win by one, a win is still a win.”

Because of their undefeated status, everyone is gunning for the Royals and the No. 1 spot, O’Connor said. As they prepared for the tournament, they concentrated on camaraderie, protecting the ‘paint’ and scoring in it. O’Connor said his team’s greatest advantage is the experience of his players who have been through this tournament before.

“You can’t teach experience,” O’Connor said. “You have to go through that and we are lucky to have it.”

Kaiserslautern 52, Vilseck 51: The most exciting game of the day had to have been the Raiders against the Falcons.

Kaiserslautern’s Isaak Pacheco sent the game into overtime in the final seconds by nailing a three-point shot with his team down 47-44.

Vilseck had a chance to convert in the final seconds of the extra four minutes but couldn’t convert.

“I feel good,” Pacheco said. “Our coach set up the right play, got us the right inbound passer and all that was left was my shot and I just made it. We had a bit of a slow start, but we knew that we could come back and just chip away at them. We just focused on shutting down their high posts.”

The Raiders and Wiesbaden enter Thursday’s play with 2-0 records in the five-team pool and each need just a win to advance. Vilseck needs a pair of wins and some help.

Bahrain, DODEA-Europe’s only team based outside of Europe, endured its typically rigorous travel schedule to complete its annual visit to Germany. But the team found a way to decompress before starting its postseason schedule.

“We walked around Germany yesterday. It’s pretty nice,” senior guard Derek Westendorff said. “We just hung out as a team, rested. That’s what we do.”

Bahrain was equally at ease on the court Wednesday, outscoring a shorthanded AOSR team 17-3 in the fourth quarter to cruise to the win and clinch a semifinal berth.

Top-seeded Black Forest Academy beat AOSR late Wednesday to claim the three-team pool’s other spot in the elimination round.

Second-seeded Rota shook off a challenge from seventh-seeded Marymount to take a 44-42 victory in an early-morning matchup, while third-seeded Aviano claimed a 36-27 win over sixth-seeded AFNORTH. Marymount stayed in the mix for a semifinal berth with a late 29-26 defeat of AFNORTH.

The situation is likely to be resolved early Thursday as Marymount faces Aviano and AFNORTH takes on Rota. Aviano and Rota meet Thursday afternoon to settle any remaining preliminary business.

Pollard, a junior who’s been in Brussels for all of five months, scored 27 points despite what he considered a frustrating shooting effort.

“My shot wasn’t falling so much today but I worked myself to the line and got what I could,” Pollard said. “I’ve got to attack to be able to get buckets.”

The Brigands clinched a semifinal berth later Wednesday with a 46-7 defeat of Ankara.

The top-seeded Ansbach Cougars beat Hohenfels 59-19 and Ankara 44-4 on Wednesday to join Brussels in Friday’s elimination round, making Thursday’s Brigand-Cougar showdown meaningful only in terms of arranging semifinal matchups.

Both teams will tip off twice on Thursday after playing just once Wednesday, including an afternoon face-to-face meeting. Both can lower the stakes of that game if they win earlier Thursday.Knowles.aaron@stripes.com; broome.gregory@stripes.com