Friendly competition on the menu at Italian meets 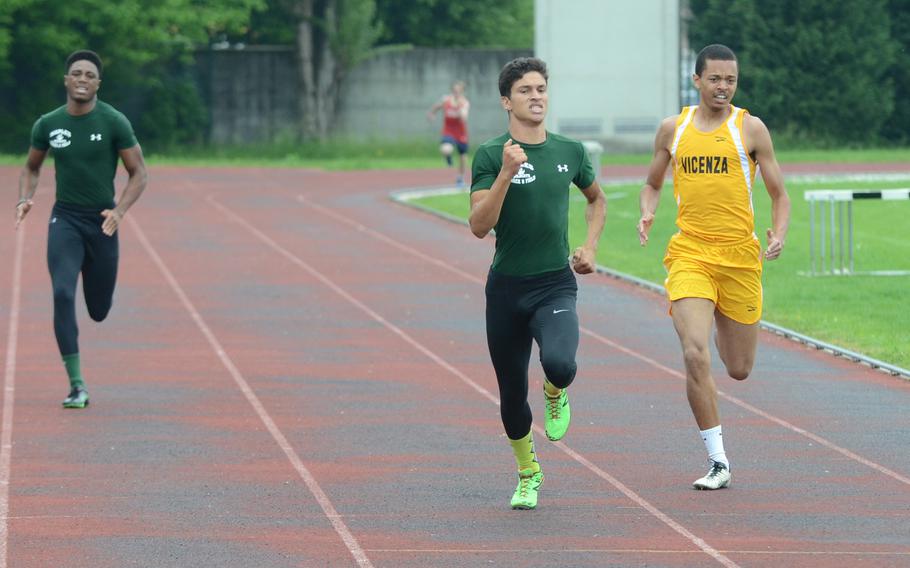 Naples' Anthony Fisher takes the lead ahead of Vicenza's Early Wheeler and teammate Cameron Copeland Saturday during the 400 meters at Creazzo, Italy. Fisher finished in 51.85 seconds and Wheeler finished with 52.36. (Jason Duhr/Stars and Stripes)

Naples' Anthony Fisher takes the lead ahead of Vicenza's Early Wheeler and teammate Cameron Copeland Saturday during the 400 meters at Creazzo, Italy. Fisher finished in 51.85 seconds and Wheeler finished with 52.36. (Jason Duhr/Stars and Stripes) 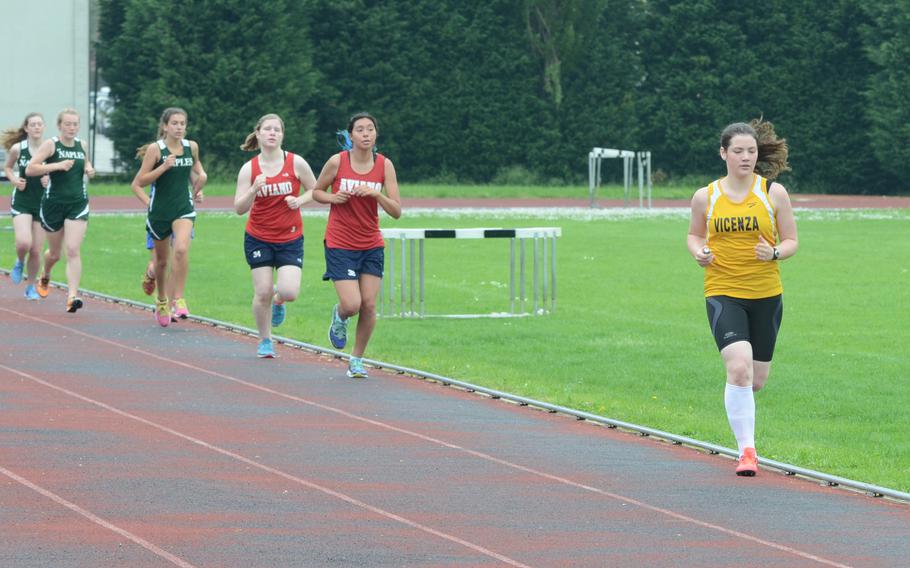 Vicenza's Abi Houghton gets an early lead during the 1,600 meter run Saturday during a track meet at Creazzo, Italy. (Jason Duhr/Stars and Stripes) 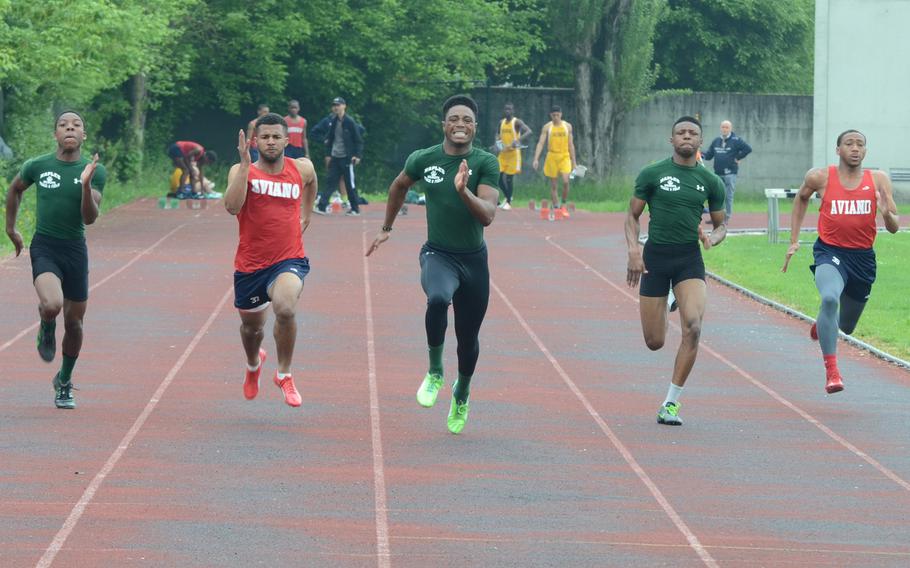 Vicenza's Brandy James leads the pack Saturday during the 100-meter dash at a track meet at Creazzo, Italy. James took first with a time of 13.03 seconds. (Jason Duhr/Stars and Stripes) 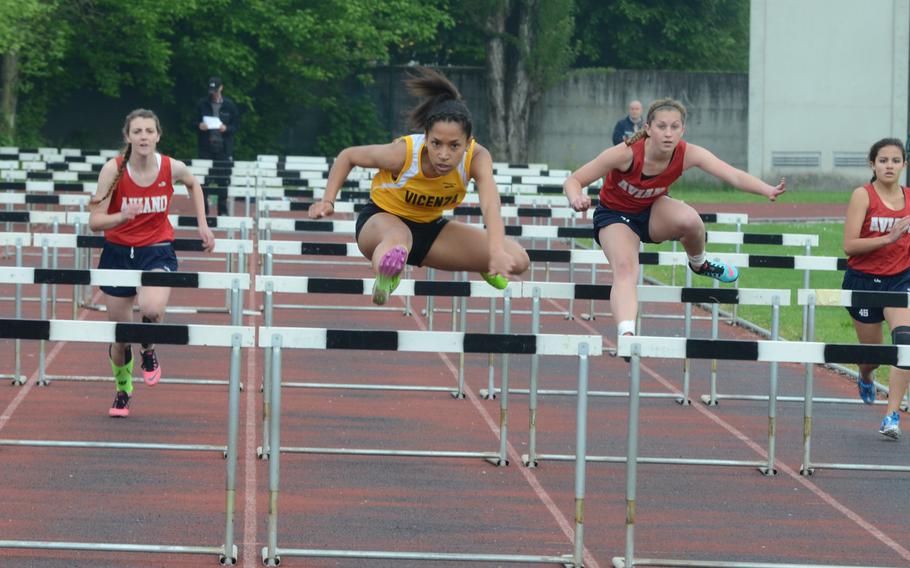 Vicenza's Chanel Powell takes the lead of the 100-meter hurdles Saturday, finishing with a time of 18.84 seconds at a meet in Creazzo, Italy. (Jason Duhr/Stars and Stripes) Vicenza's Kate Wilkins pulls ahead of Naples' Ada Laurer Saturday during the 4x800 relay event at Creazzo, Italy. The Cougars won with a time of 12 minutes, 45.58 seconds. (Jason Duhr/Stars and Stripes) 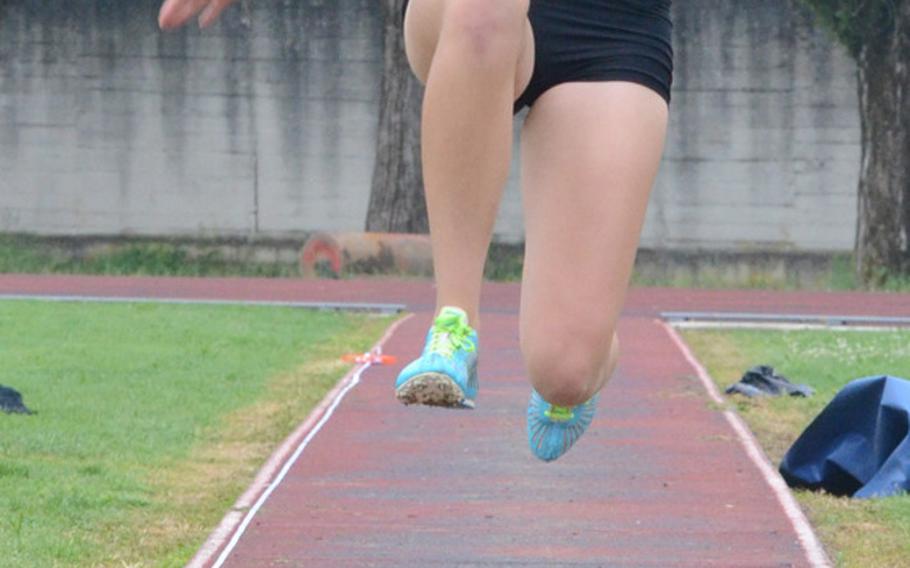 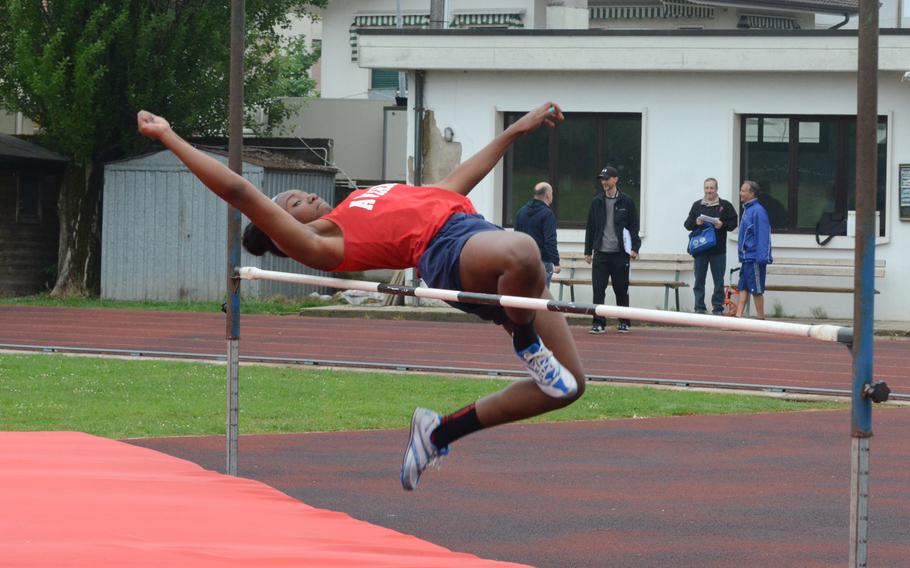 CREAZZO, Italy – DODDS track athletes based in Italy appear to be putting the emphasis this season on the first word of the phrase “friendly rivalry.”

During a track meet held Saturday near Vicenza, athletes showed a competitive spirit not only motivating fellow teammates, but those they were competing against.

Harjo says the comradery between the Italian teams causes the athletes to push each other harder.

Fisher beat out Wheeler in the 400 meters by a fraction of a second with times of 51.85 seconds and 52.36, respectively. Wheeler won the week before as the two vie to see who’s the fastest around the track in Italy.

Vicenza coach Michael Haiderer said a long drive north of the Alps a few weeks ago contributed to the atmosphere.

“I think it’s the bus rides that we spend hours and hours together on,” Haiderer said. “You form bonds and there’s not that pure hatred between each team.”

A handful of athletes had more to cheer about Saturday than others.

Naples’ Caitlin Quirk took the lead early on during the 3,200 meter run and finished in 13 minutes, 5.93 seconds. She knocked 30 seconds off her previous best, according to Harjo.

Wheeler met her competitive match in the long jump when Aviano’s Taja Dotson equaled her jump of 14 feet, eight inches.

The Saints’ Cody Price was first in the shot put and discus events with throws of 39 feet, 1.5 inches and 93 feet, 8.5 inches, respectively.

The teams next converge May 16 in Naples, where they’ll compete the last time before Europeans.

“We’ll have our own pack of support among the Italian schools as we head to Europeans,” Haiderer said.