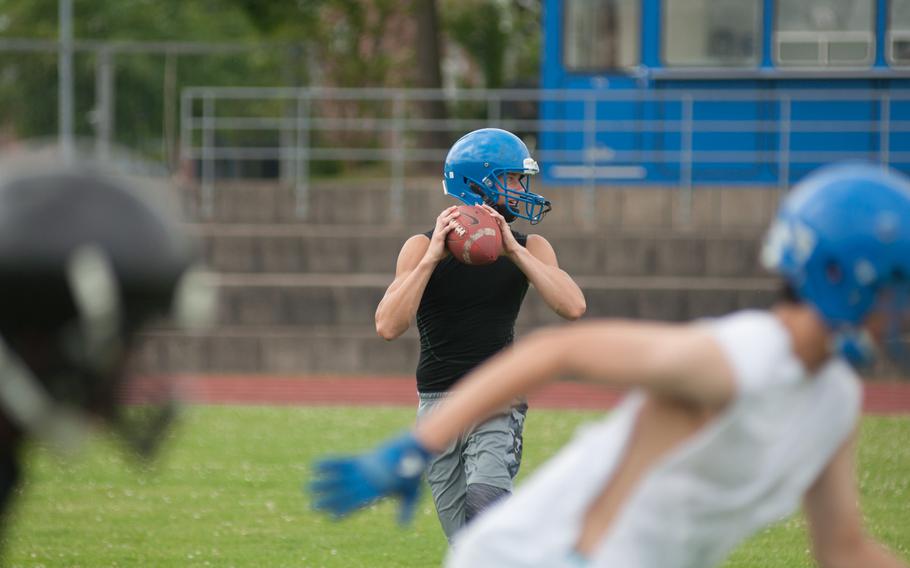 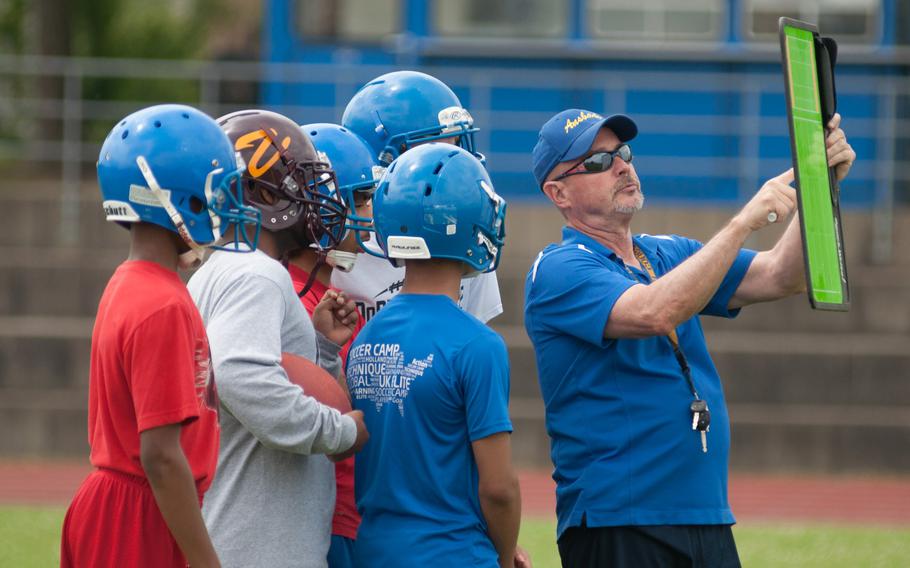 Ansbach's coach Marcus George runs through a play with some of the younger athletes that attended a football camp geared toward honing fundamental skills. George, along with Vilseck's coach Jim Hall and Hohenfels' coach Larry Daffin ran the daylong camp at Ansbach, June 13, 2015. (Michael S. Darnell/Stars and Stripes) 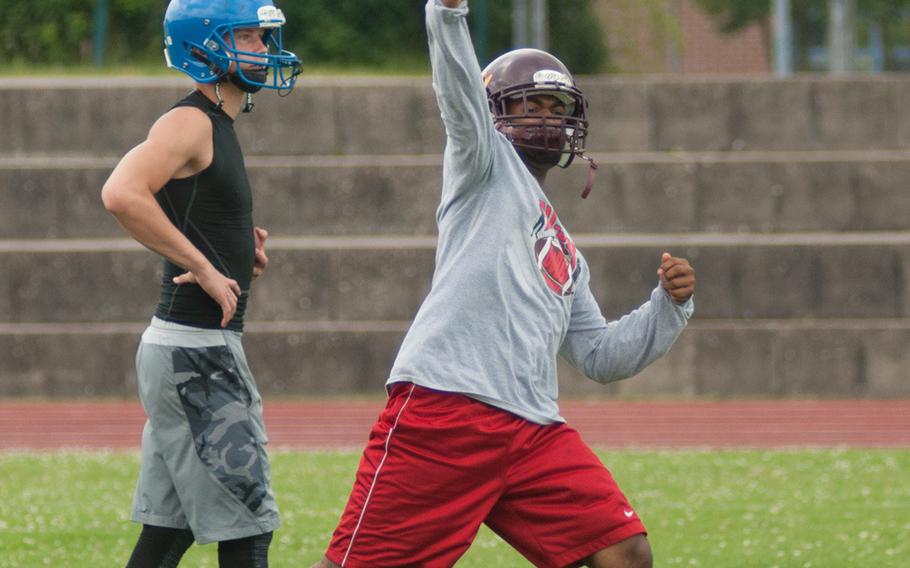 Vilseck's Drew Pinckney lets it fly, while Ansbach's Bailey Ward looks on, during a pass and catch session at a football camp held at Ansbach, June 13, 2015. (Michael S. Darnell/Stars and Stripes) 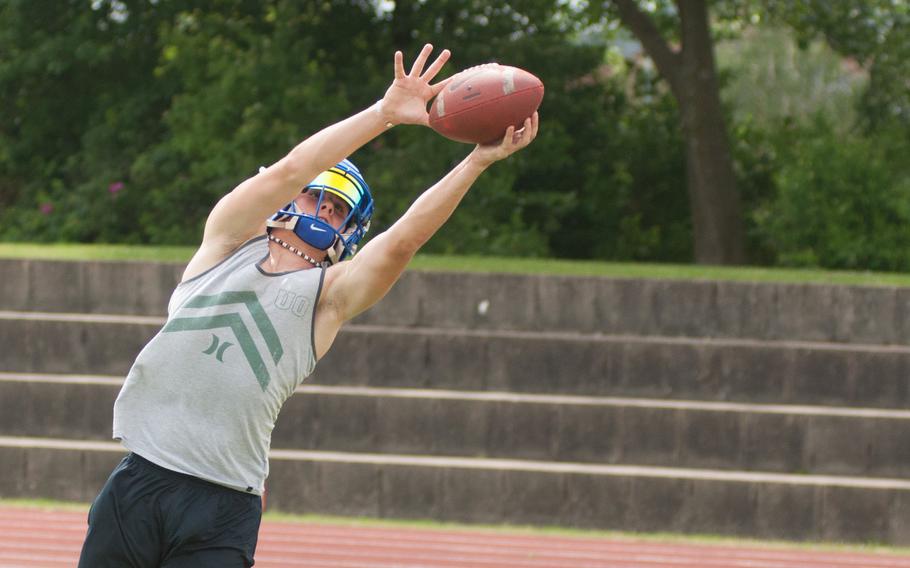 Tyler Benton, Ansbach's All-Europe middle linebacker, extends out for a catch in the end zone during a 7-on-7 drill, June 13, 2015. (Michael S. Darnell/Stars and Stripes) 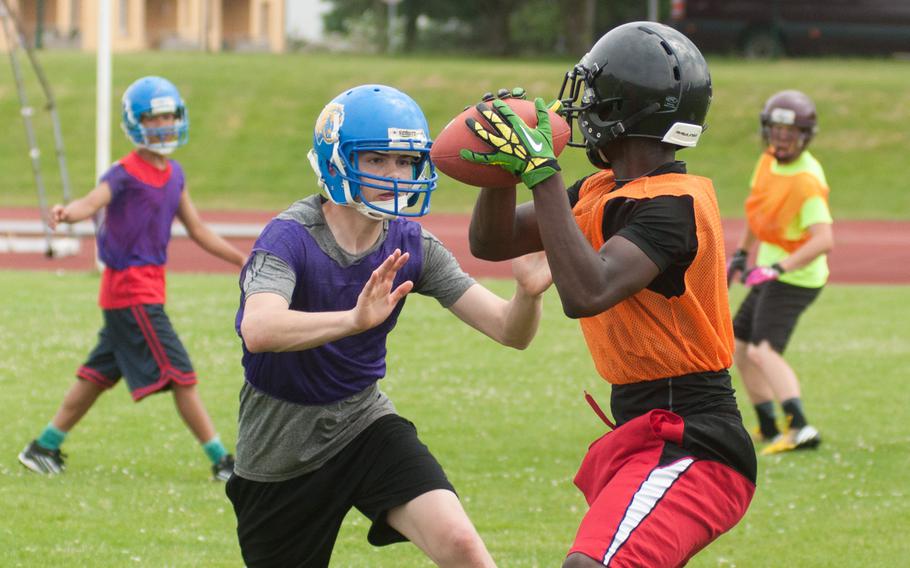 Hohenfels' Trey Briscoe catches a pass while Ansbach's Gary Smith reaches in for the two-hand touch during a football camp held at Ansbach, June 13, 2015. (Michael S. Darnell/Stars and Stripes) 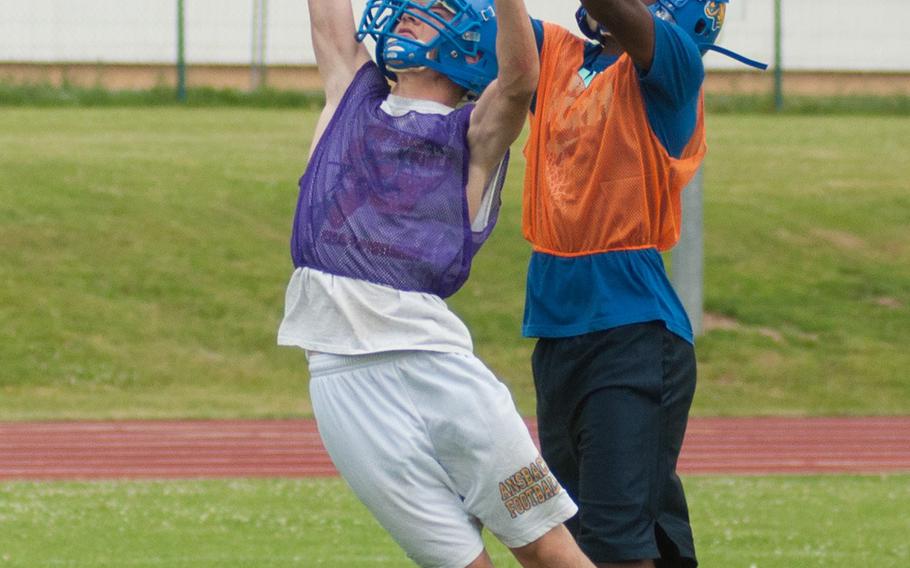 Jordan Lennon and Nyamakhere Waye, both Ansbach players, go up for a pass during a football camp held at Ansbach, June 13, 2015. (Michael S. Darnell/Stars and Stripes)

ANSBACH, Germany — The 2014-15 school year is finally in the history books, and most students are enjoying the opening days of the summer break.

But some student athletes already began training for the upcoming football season.

Coaches from the three major Bavarian-area DODDS-Europe schools have banded together to host several off-season training camps. The first– a quarterback/receiver skills camp – took place at Ansbach on Saturday.

Coaches Marcus George (Ansbach), Larry Daffin (Hohenfels) and Jim Hall (Vilseck) each gathered as many players as they could and brought them to Ansbach to run them through their paces. Outside of the obvious skills training, George said the camps served a different purpose.

“It’s just a lot of fun,” he said. “It gets them out of the house and out of trouble and gets them thinking about sports. A lot of kids realized they had some skills to work on, so that’s a bonus.”

Those players ranged from veterans like Vilseck’s All-Europe linebacker Drew Pinckney to a gaggle of freshman looking to make a good first impression on who they hoped will be their future coaches.

Many of those younger players were coaxed out of their summer lull and encouraged to attend the day-long camp by the seniors who will likely be their team captains come next year.

“We convinced them to come,” said Ansbach’s Jaime Anderson, now entering his senior year. “Basically, we used the championship. If we want it, we have to work for it. We told them that and they showed up.”

While it was clear the camp’s focus on fundamental football skills benefitted the younger players most, even players with some playing time under their belts say they benefitted from the return-to-basics approach of the camp.

Frantz Moise, a Hohenfels sophomore wideout said his attendance was just the start of his summer-long training schedule. On Saturday, knocking the rust off his route running was his primary focus. Other players, like Ansbach’s prospective freshman player said he was there to continue a proud football tradition set forth by his day.

But it was Vilseck’s Tristen St. Clair who might have best summed up what brought each player out of his summer break to spend a day getting dirty and bruised up on the gridiron.

“It’s for the love of the sport,” he said, strapping up his helmet. “There just is never enough time for football.”