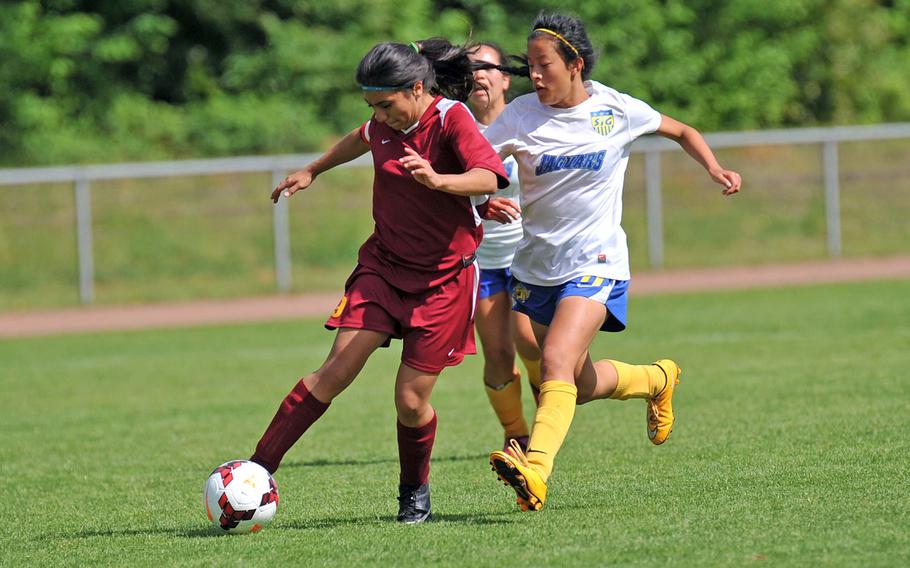 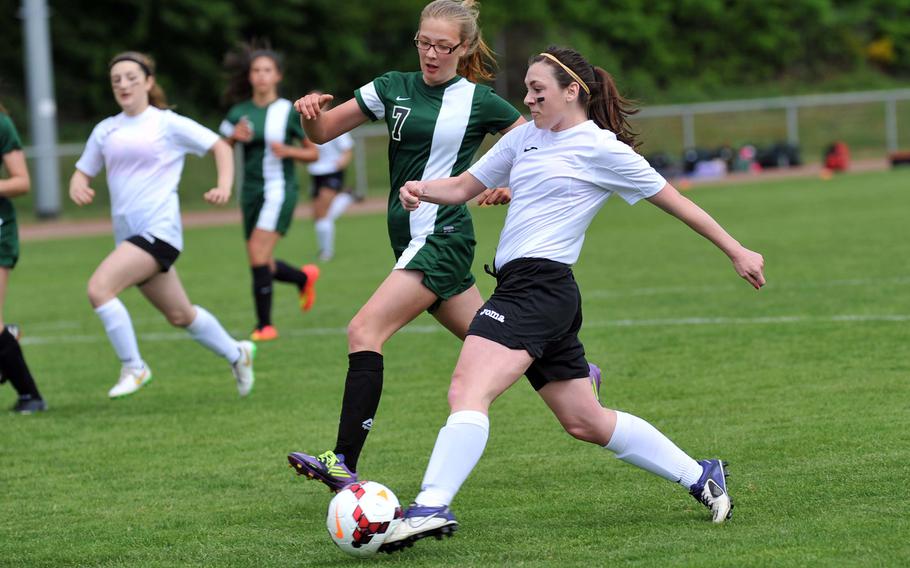 Alconbury's Joely Womack gets a shot off against Ankara's Ela Babinski in a Division III game at the DODDS-Europe soccer championships at Landstuhl, Germany. Alconbury won 6-0. (Michael Abrams/Stars and Stripes) 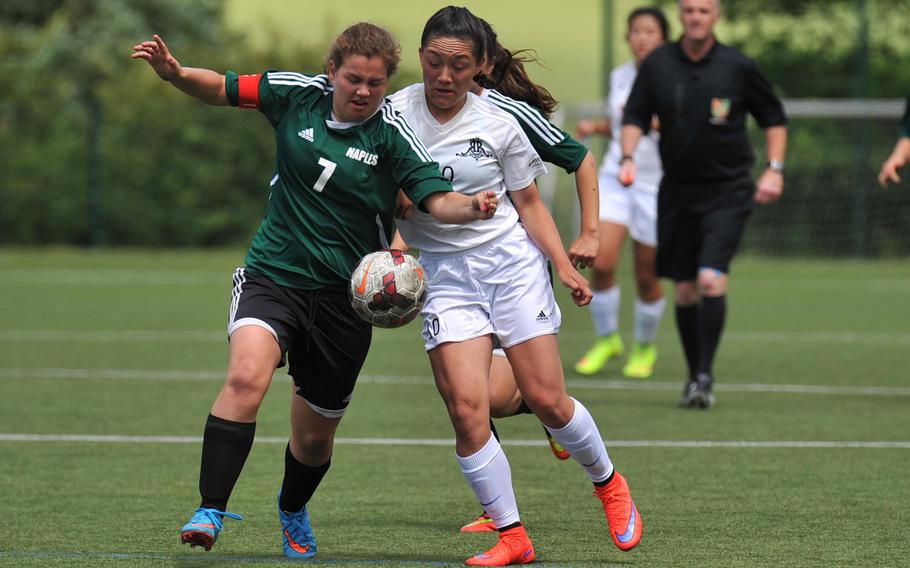 Amanda James of Naples, left, and Ramstein's Ebony Madrid fight for the ball in a Division I game at the DODDS-Europe soccer championships at Reichenbach, Germany. Ramstein won the game 4-0. (Michael Abrams/Stars and Stripes) Vilseck's Sarah Hall, left, and SHAPE's Sydney Greenfield fight for the ball in a Division I game at the DODDS-Europe soccer finals in Reichenbach that ended in a 1-1 tie. (Michael Abrams/Stars and Stripes) 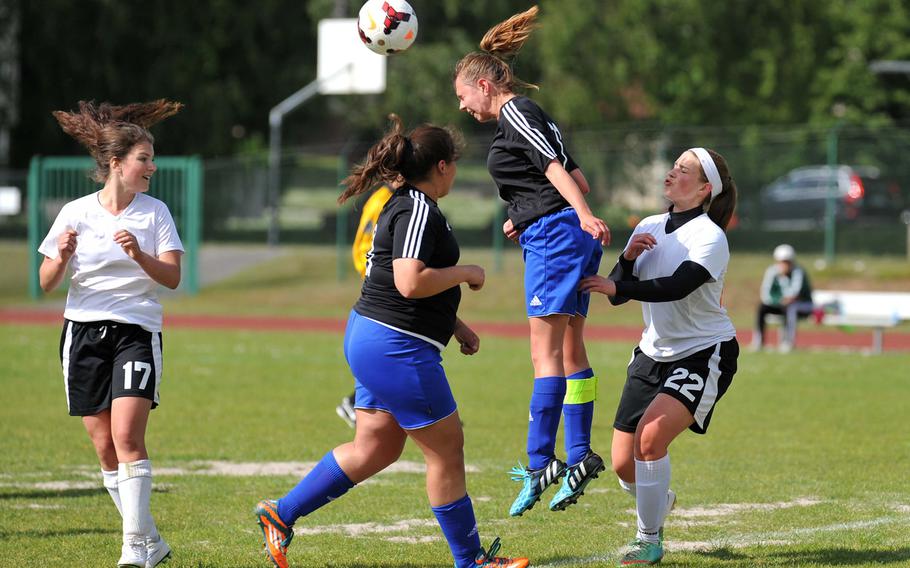 Hohenfels' Shelby Atkinson heads the ball out of danger in front of AFNORTH's Sarah Phillips, right, in a Division II game at the DODDS-Europe soccer championships in Ramstein, Germany. The game ended in a 1-1 tie. (Michael Abrams/Stars and Stripes)

Division I and II favorites filed into the semifinals in mostly predictable fashion Tuesday as seven of eight top-four seeds advanced through the preliminary rounds of the DODDS-Europe girls soccer championships.

Division IWiesbaden 2, Vicenza 0: The Warriors eased into the semifinals at the expense of the eighth-seeded Cougars.

The win was the second straight shutout for Wiesbaden, which blanked Lakenheath 6-0 on Monday.

The Warriors are making good use of the relatively painless preliminaries by scouting their pending opponents.

"We've been scoping out other teams," Klein said, specifying that the Warriors are looking for "defensive weaknesses" in the teams they observe.

Patch, Ramstein stay perfect: If the Panthers and Royals have any vulnerabilities, they're doing a great job hiding them.

Both teams completed pool play without a loss or even a goal against. The twin powers of DODDS-Europe appear a strong bet to continue their annual tradition of championship game showdowns.

Patch gave Wiesbaden an up-close view of its considerable talents with a 3-0 defeat.

The tournament's top seed ran the pool play table, adding a 5-0 defeat of Lakenheath and the win over Wiesbaden to Monday's 3-0 defeat of Vicenza.

Patch's late match with Wiesbaden was significant for seeding purposes only as both teams had already clinched semifinal spots.

Ramstein breezed through two potentially problematic games in the other pool. The Royals handled 2014 Division II champ Naples 4-0 in a champion vs. champion match, then ended archrival Kaiserslautern's season with a 2-0 win.

The Royals take pride in blanking usually prolific attacks like those of Naples and Kaiserslautern.

"It's very important to us," senior defender Matty Spohr said, citing "communication" as the key to the lockdown D. "That's what our defense strives for."

Despite the loss, sixth-seeded Naples will advance to the semifinal round on the strength of its 1-0 Monday defeat of Kaiserslautern. The Wildcats are hoping to extend a half-decade streak of European championships even after their Division II reign was cut short by realignment.

Division IIAmerican Overseas School of Rome 5, Aviano 0: The Falcons advanced to their first girls soccer semifinal berth with a dominant effort against their Italian rival.

Alessandra Valcastelli got the Falcons on the board in the first half. Four teammates - Ludovica Sessa, Leona Caanen, Alessia Giombini and Morgane Peeters - added goals as the AOSR offense accelerated after halftime.

Caanen, a native of Netherlands and a team captain, described how the team's offense fell into place in the second half.

"We just picked it up. More intensity, more shots on goal," she said. "It just clicked. Passes went right, good communication on the field."

A junior, Caanen is now eager to see the latter rounds of the tournament along with her longtime Falcon teammates.

"We've been waiting to go to the semifinals for a long time," Caanen said.

AOSR played top seed Black Forest Academy to a 1-1 draw later in the day, an outcome that sent both teams to the semifinal round.

AFNORTH 1, Hohenfels 1: The Tigers and limping Lions moved into the final four with an afternoon draw that bounced upstart Rota from title contention.

After a runner-up finish to Naples last spring, AFNORTH was an on-paper favorite to earn another title shot this spring, especially when realignment removed Naples, Vicenza and SHAPE from the bracket. While the team is still in the title hunt, the on-field reality hasn't been so straightforward.

The decimated Lions are barely able to field an 11-player squad, and several of their active players are dealing with nagging injuries, coach Christopher Booth said.

"Take care of them," Booth said of his wounded squad. "That's really what we've got to do."

Division IIIBaumholder 1, Sigonella 0: Bucs junior Karina Inchauregui sent a freet kick directly into the top of the net for the game's decisive goal.

After seeing her team repeatedly stymied by the Jaguar defense, the junior made good on the rare clean look at the goal.

"On the free kick, the ref told me it was direct, so I felt like I should just go for it," Inchauregui said. "The defenders had a nice wall straight through the middle, so I decided to go high."

The seven-team small school tourney got under way with a collection of six matches.

More key matchups are set for Wednesday morning, when No. 1 Alconbury faces No. 4 Sigonella and No. 2 Florence takes on No. 3 Brussels.

The Division III girls bracket is the only one without a set of Wednesday semifinals. Finalists will be decided early Thursday ahead of the 3 p.m. CET title game.