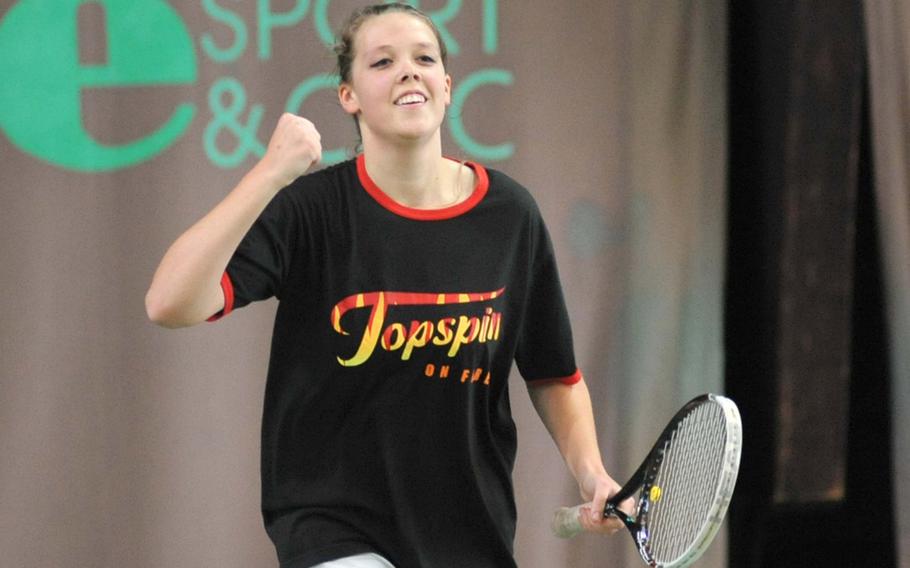 Wiesbaden's Jade Sullivan celebrates after winning the girls singles final at the DODDS-Europe tennis championships in Wiesbaden, Germany, last year. She will be back to try to defend her title when this year's championships get underway Thursday. (Michael Abrams/Stars and Stripes)

Wiesbaden's Jade Sullivan celebrates after winning the girls singles final at the DODDS-Europe tennis championships in Wiesbaden, Germany, last year. She will be back to try to defend her title when this year's championships get underway Thursday. (Michael Abrams/Stars and Stripes) 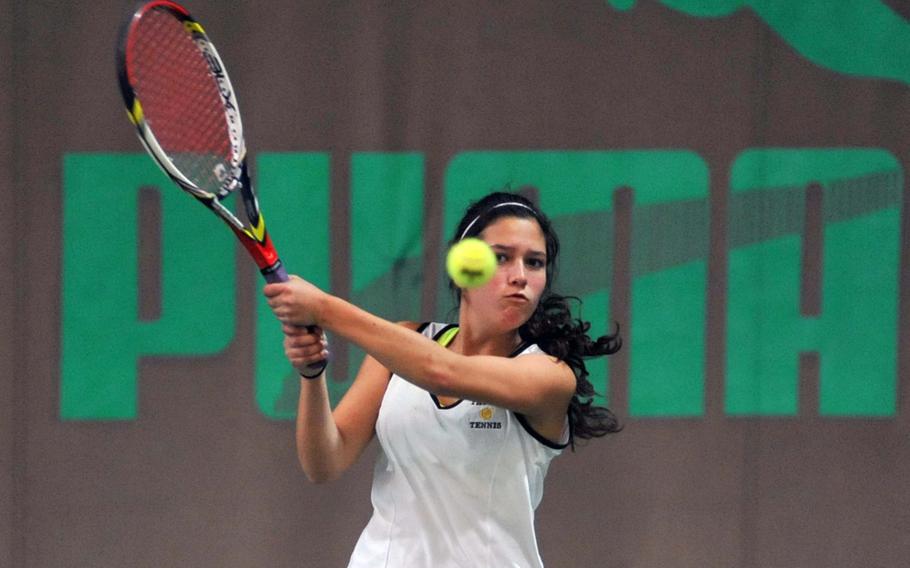 Patch's Marina Fortun returns a shot at last year's DODDS-Europe tennis championships. She will be returning for this season's event that gets underway Thursday. (Michael Abrams/Stars and Stripes) 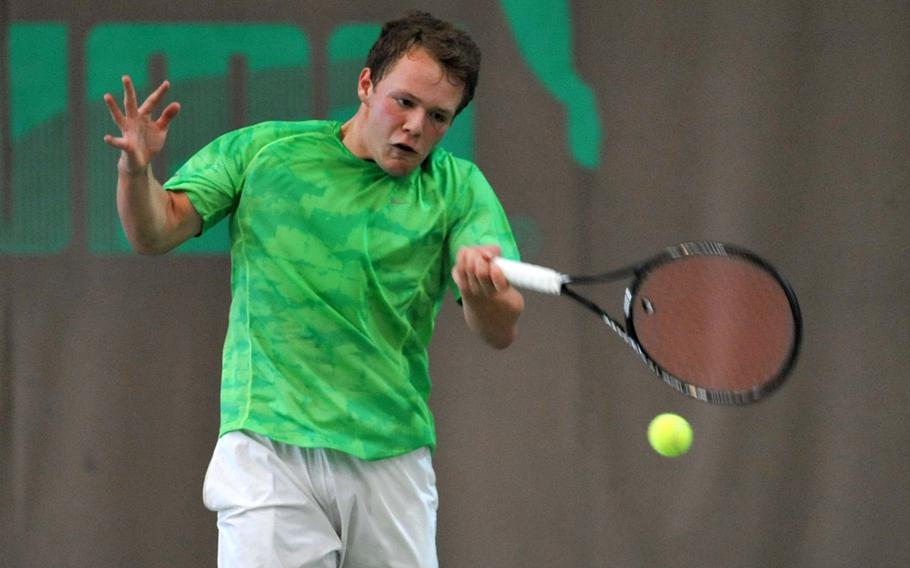 George Shaffer of Naples is one of the favorites in the boys singles competition at this year's DODDS-Europe championships that get underway in the Wiesbaden area Thursday. (Michael Abrams/Stars and Stripes) 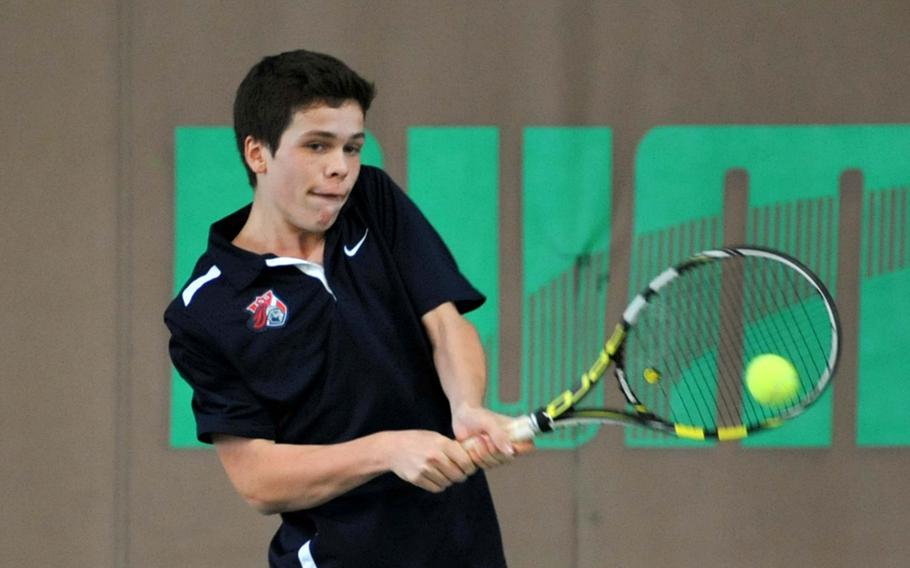 ISB's Fabian Sandrup Selvik , last year's runner-up, is one of the favorites in the boys singles competition at this year's DODDS-Europe championships that gets underway in the Wiesbaden area Thursday. (Michael Abrams/Stars and Stripes)

The 2014 DODDS-Europe tennis championships take place Thursday through Saturday at three sites in the vicinity of Wiesbaden, Germany. Here’s a look at the top contenders trying to claim the four titles at stake:

Girls singlesThe title is Jade Sullivan’s to lose. But losing isn’t something Sullivan does very often.

The fast-improving Wiesbaden Warrior ace claimed the 2013 European title as an upstart sophomore. Any element of surprise she enjoyed last fall has long since dissipated. But it’s been replaced by outright dominance; as a junior, she hasn’t dropped a singles or doubles set all season.

That streak almost came to an end on Oct. 18 at Stuttgart. Sullivan’s latest encounter with nemesis Marina Fortun of Patch fell right in line with the rivals’ previous clashes. Sullivan emerged with a hard-won 7-6 (7-3), 6-1 victory.

While that match kept Sullivan unbeaten and pointed towards a repeat championship, it was close enough to suggest that Fortun stands a solid chance against Sullivan with a few breaks in her favor. A former European doubles champion, Fortun knows what it takes to claim Saturday gold.

Boys singlesWhile the solo boys field lacks a defending champion, it does have a clear heir apparent.

International School of Brussels ace Fabian Sandrup Selvik reached the European championship match last season, where he lost to Lakenheath sophomore Peter Kovats. But Kovats has headed stateside, denying Selvik a shot at redemption but also leaving him as DODDS-Europe’s top returning boys player. He solidified his spot with an unbeaten regular season and a top overall seed in this week’s tournament.

Selvik, however, isn’t the only player back from last year’s late rounds. Naples senior George Shaffer reached the semifinals last year before falling to Kovats. But his 6-2, 6-2 loss to the eventual champ was nearly identical to Selvik’s 6-2, 6-3 loss in the title match, and the two didn’t face each other in that tournament or this regular season. A showdown this week might swing either way.

Girls doublesThis unpredictable 16-team bracket is an interesting mix of the fresh and the familiar: one member of all four 2013 semifinalist teams is back this fall, but each will bring a new partner.

Meanwhile, semifinalist squads from Kaiserslautern and ISB have retooled. Anna Roberts helped Kaiserslautern to a third-place finish last season; she’s back with Katie Merchat for a teammate. The ISB squad, a strong fourth-place finisher in 2013, will field returnee Megumi Osasawara alongside new partner Maya Yoshihashi.

While strong squads from AFNORTH and Florence have since fallen away, ISB’s path is still blocked by small Rome-based program Marymount. MMI won last year’s title with the team of Matteo Ciccozzi and Ting Lin; while Lin has moved onto singles competition, Ciccozzi and new partner Matteo Bagnetti will be a top contender to extend the school’s streak.

Kaiserslautern’s Joshua Merchat and Henry Butler and Bahrain’s Frank Li and Moustafa Refai hold the other top seeds in the four-pool, 16-team bracket.