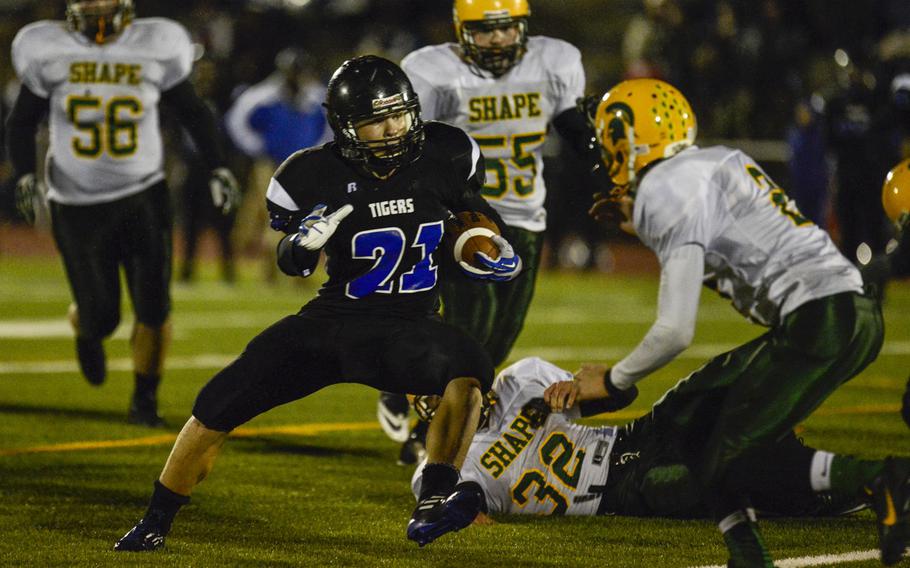 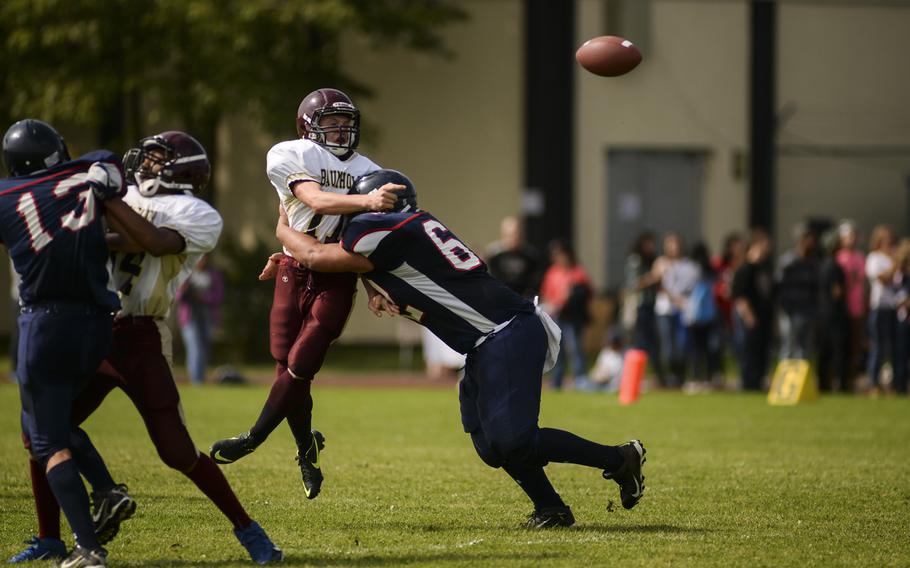 All the complicated math that went into determining the qualifiers for the DODDS-Europe Division II football playoffs can now be reduced to a few simple numbers.

Eight. The number of teams in the championship bracket.

Four. The number of season-defining games scheduled for Saturday.

Three. The number of consecutive games a team must win to claim the title.

And finally, one. The number of champions crowned.

Interestingly, none of this weekend’s games will be between schools based in the same country. Instead, German-based teams will face squads from northern Italy and Belgium while DODDS-Europe’s only Spanish entry makes the long trip to Naples.

Here’s a look at the four quarterfinal matchups this weekend:

No. 8 Aviano (2-3) at No. 1 Ansbach (5-0)The mathematical mismatch of the tournament is likely to be similarly one-sided on the field.

The eighth-seeded Saints had their moments this season. They started out strong, blasting International School of Brussels 39-0 on Sept. 6. A 38-22 win over AFNORTH on Sept. 22 represented their second and final win of the regular season.

It’s Aviano’s brutal region and resulting high strength of schedule that ultimately gave the team the required points to edge into the playoffs. But the Saints’ record against those regional powers makes an upset unlikely; they lost to above.-500 foes Vicenza, Hohenfels and Naples by a combined 131-27 margin, including a final-week 50-15 loss to Naples.

The top-seeded Cougars, however, might be the fiercest team the Saints have seen yet. And they certainly don’t look vulnerable to a quarterfinal slip-up.

“Ansbach always plays at a top-notch level,” Aviano coach Richard Dahlstrom said. “So I do not see a let-up this weekend.”

Ansbach was hardly challenged in its dominant regular season, a 5-0 slate that included multiple-touchdowns wins over fellow playoff teams Naples, Bitburg and Rota. The Cougars haven’t scored less than 40 points or allowed more than 13 points all season, a run that coach Marcus George called a “surprise” given his team’s youth.

At this point, it would be more surprising if the Cougars’ march towards the championship game falls short.

No. 7 SHAPE at No. 2 HohenfelsThis game is a rematch of last year’s European championship game, which Hohenfels won 38-35. But fans hoping for a similarly-themed sequel to last year’s thrilling title-game tilt are likely to be disappointed with this one.

The champion Tigers have rolled their momentum into a new season, this one an undefeated improvement on the 3-2 record they produced in 2013. That’s a function of the team’s “maturation,” coach Larry Daffin said.

“We have talked all season about staying hungry and humble,” Daffin said.

Hohenfels’ opponents have come close to humbling the Tigers themselves. While undefeated, Hohenfels hasn’t always played on a clearly higher level as Ansbach has.

Things started off easily enough with routs of Alconbury and Aviano. But then the margins tightened considerably. Naples flirted with an upset before taking a 40-28 loss on Sept. 27. Bitburg nearly avenged its surprise loss from last season’s semifinals on Oct. 4, but Hohenfels squeezed out a 36-32 win. The Tigers completed their unbeaten regular season with a hard-fought 33-26 win over Vicenza.

It’s fair to say that the Tigers should expect some close games, even before a prospective meeting with No. 1 Ansbach. The question for this weekend is if SHAPE is capable of giving them one.

The Spartans, while clearly not as deep and talented as last year’s near-championship squad, won three of five games and were very competitive in their other losses, which came by a combined 23 points to Naples and Vicenza. In fact, they held each of those teams to 20 points, a potential positive omen for dealing with David Vidovic and the Tigers’ explosive offense.

No. 6 Rota at No. 3 NaplesThe Wildcats spent the season lurking as a dark-horse contender, but they ended up an emphatic high seed with a home-field playoff opener.

Naples got the first shot at juggernaut-in-waiting Ansbach and didn’t fare any better than any of the teams that followed them in a 48-7 loss. But the team went 3-1 over the balance of the season, losing only in a spirited 40-28 setback to Hohenfels, and burst into the postseason by sweeping Italian rivals Vicenza and Aviano over the season’s final two weeks.

The Wildcats certainly have the personnel to make a postseason run. Like most DODDS-Europe teams, the Naples offense is predicated on the run. But very few other schools can match the Wildcats’ depth and versatility. A fitting example of that came Saturday against Aviano, when Ty’Rick Riggins, Kory McKinney, Chris Greene, Nick Snider and Zane Zimmerman all produced ground-based scores.

The Admirals, meanwhile, are enjoying a fresh taste of Division II success. A runner-up in the Division III championship game in 2012, Rota went winless in Division II last season before righting the ship in 2014.

For every mark in Rota’s favor as a legit contender, there’s another against it.

The Admirals finished above .500 at 3-2, but their wins came over Baumholder, Alconbury and AFNORTH, teams with a combined one victory between them.

Their 44-13 loss to Ansbach was encouraging in that it posted the highest point total any team has managed against the Cougars. But one of those touchdowns came on a defensive interception well after the game was decided, and the Rota offense struggled in a 36-6 loss to Bitburg on Sept. 27.

No. 5 Vicenza at No. 4 BitburgPerhaps Saturday’s most-evenly matched game is a battle between two teams whose regular season performances came up short of expectations. But one of the two will advance to the semifinals, a success by almost any program’s measure.

The inverse of late-charging Naples, Vicenza stormed out of the 2014 gate with three straight victories, the first two shutouts of Aviano and ISB. Coupled with their 2013 playoff bid, an impressive showing at the annual summer camp at Ansbach and the continued improvement of quarterback Mario Molina, the Cougars were emerging as a trendy championship pick.

The regular season’s last two weekends, while not fatal to those hopes, proved damaging. A loss to Naples knocked them down from the undefeated elite class they’d shared with Hohenfels and Ansbach. A loss to Hohenfels a week later sent them packing for a playoff-opening road game.

Still, the Cougars lost each game by a single possession – 32-26 to Naples, 33-26 to Hohenfels – so they’re not far away. A key defensive stop or offensive conversion might swing them back into title territory.

That was Bitburg’s turf until last season, when Hohenfels ended coach Mike Laue’s DODDS-Europe-record streak of consecutive wins and with it the Barons’ four-year stranglehold on the European crown. The Barons have struggled to regain their champions’ footing this fall, taking losses to Hohenfels and Ansbach.