Dozens in the chase to sit in vacated thrones 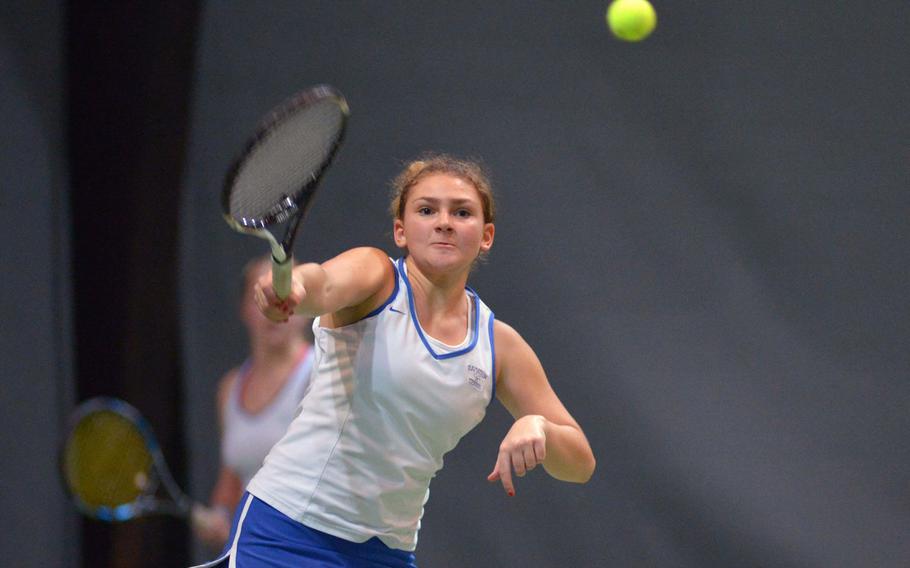 Ramstein's Amanda Daly attacks the ball at the net in a girls doubles semifinal against Vicenza at the DODEA-Europe tennis championships in Wiesbaden, Germany, Friday, Oct. 30, 2015. (Michael Abrams/Stars and Stripes)

Ramstein's Amanda Daly attacks the ball at the net in a girls doubles semifinal against Vicenza at the DODEA-Europe tennis championships in Wiesbaden, Germany, Friday, Oct. 30, 2015. (Michael Abrams/Stars and Stripes) 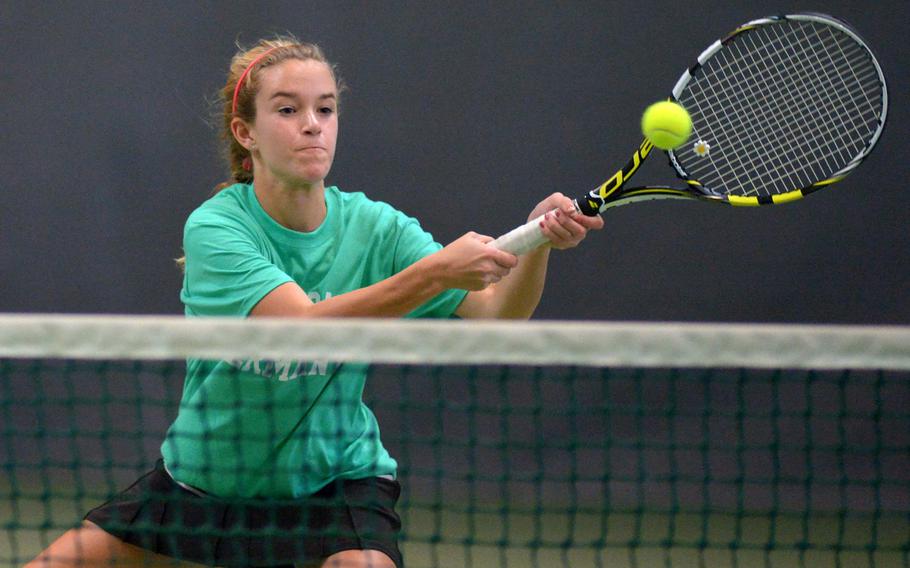 Stuttgart's Kendall Smith hits the ball at the net in a girls doubles semifinal against ISB at the DODEA-Europe tennis championships in Wiesbaden, Germany, Friday, Oct. 30, 2015. (Michael Abrams/Stars and Stripes)

Two vacant European singles championships await at the end of the DODEA Europe tennis season, which starts Saturday at six sites across Germany, Italy and Belgium and runs through the European tournament Oct. 27-29 at Wiesbaden.

And the openings aren’t limited to the singles ranks. Stuttgart and ISB plan to tap into European championship doubles pairings to replace their departed solo champs, leaving the boys and girls doubles titles equally in play.

GirlsAs many DODEA Europe tennis elites have before her, two-time European girls singles champion Marissa Encarnacion has transitioned into the more deeply competitive world of German and international play, thereby forgoing her prep eligibility this fall.

That creates an abundance of opportunity for this year’s field of championship hopefuls.

Foremost among them is Stuttgart junior Kendall Smith, one half of the Panthers’ 2015 European girls doubles championship unit. Smith has emerged as an enthusiastic leader for the Panthers girls, coach Daniel Bose said, and should transition well to the singles ranks this fall.

Smith is likely to see a familiar opponent in this year’s tournament. Vicenza senior Kiki Sibilla is pursuing a solo title after her team fell to Smith’s in last year’s doubles final.

Ramstein, too, is rearranging the top of its depth chart. Junior Camryn Carswell is the new Royals ace after teaming with Amanda Daly to reach last year’s European doubles semifinals. Daly, a junior, will team with senior Sophie Tomatz on the program’s new No. 1 doubles outfit.

BoysThe line of succession appears to be more straightforward in the boys singles bracket. Champion Fabian Sandrup Selvik has moved on, clearing the way for brother Felix Sandrup Selvik, a member of ISB’s 2015 boys doubles championship team, to take over.

If it goes according to ISB’s plan, sophomore Victor de la Faille and junior Yuki Takeuchi will then rotate into the available No. 1 doubles title, further strengthening the program’s grip on DODEA Europe boys tennis.