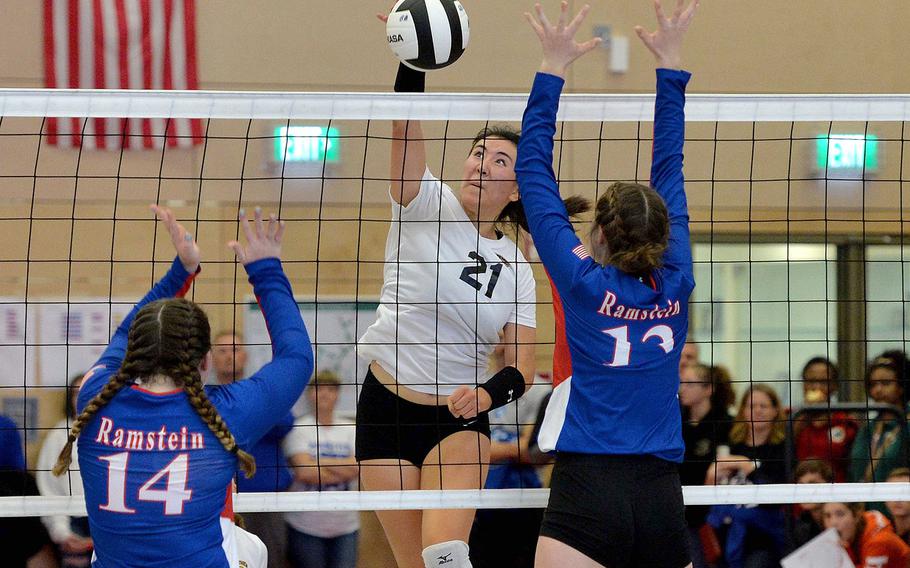 Stuttgart's Karen Kosinski slams the ball past the Ramstein defense of Lauren Szczygeil, left, and Sequoia Juhaz in the Division I final at the DODEA-Europe volleyball championships in Kaiserslautern, Nov. 2, 2019. The two teams won't square off until at least January this season as coronavirus concerns have pushed back the start of play. (MICHAEL ABRAMS/STARS AND STRIPES)

The American high school winter sports season in Europe will get off to a later start than anticipated. If it happens at all.

“There won’t be any competition at least until we come back in January,” Kathy Clemmons, the DODEA-Europe athletic director, said Monday, shortly after sharing an update with school administrators and athletic directors.

In Europe, the winter season has traditionally featured two weeks of competition – and about a month’s worth of practices – before the Christmas break.

But Clemmons said host nation regulations and U.S. military restrictions to try to curb the spread of the coronavirus will make the winter season far from ordinary, just as it did in the fall and spring – where entire sports or seasons were reduced or eliminated.

“Nothing has been finalized,” said Dennis Ullery, athletic director at Lakenheath in England. But if the 48th Fighter Wing grants approval, practices for both girls and boys teams in volleyball and weightlifting could start as early as Dec. 8.

That’s also the situation at Rota in Spain. AD Ben Anderson said students – who have been back in school in Rota since Oct. 5 – would like to start practice next week. But the decision will be up to the Naval Station Rota command.

Elsewhere, the situation is a bit more complicated. Germany’s national decree that expires Dec. 20 prohibits any training or competition for amateur sports, Clemmons said. It’s entirely possible that could be extended into the new year. Christmas break starts Dec. 19. and school resumes Jan. 4.

Italy has both national and regional decrees in play. Vicenza has the only DODEA high school in Italy currently with students in classrooms. AD Theresa Urquilla said the Cougars are waiting on a national decree that expires Thursday to see how they’ll proceed.

“There are so many layers, it’s just impossible to say, ‘This is what we’re going to do,’” as an organization, Clemmons said. In a mass email, she encouraged schools who could practice to start. But she said travelling to play seemed unlikely under current conditions.

“We’ll come back in January, after Christmas break, and we’ll see where we stand,” she said.

Anderson said practice is better than nothing for the Admirals, who have never fielded boys volleyball or any weightlifting teams.

“I know the kids would really like to be doing something after school,” he said.