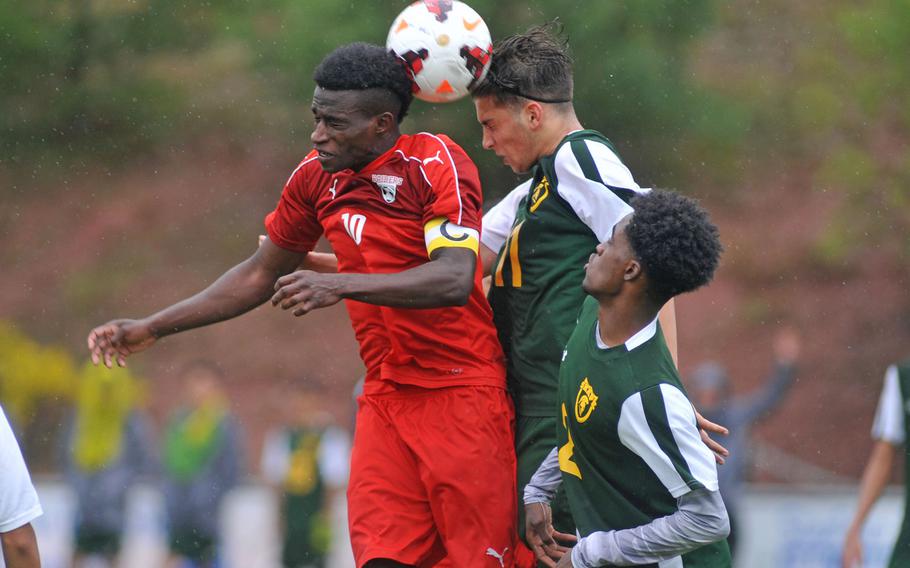 Kaiserslautern's Alexander Dexter, left, and SHAPE's Cesare Vetrano try for a header in a Division I semifinal at the DODEA-Europe soccer finals in Reichenbach, Germany. Kaiserslautern won 5-0 to advance to Saturday's finals. (Michael Abrams/Stars and Stripes)

Alexander Dexter moved to Kaiserslautern, Germany, just before his freshman year. He’s due to leave it soon after graduation this summer.

He certainly made the time in between count.

Dexter was named tournament MVP in leading Kaiserslautern to a long-awaited DODEA-Europe Division I championship this spring, capping an outstanding four-year career with the Raiders. Now he is the 2017 Stars and Stripes boys soccer Athlete of the Year, a neat bookend to the acclaim he won in 2014, when as a freshman phenom Dexter propelled Kaiserslautern to a European runner-up finish.

Two weeks removed from the championship match, the thrill of the achievement was still overwhelming for Dexter.

“I keep replaying the finals in my head, wishing I could go back,” he said. “The excitement hasn’t worn off.”

That makes sense, because Dexter and the Raiders created a lot of excitement. After years of postseason frustration, including a home-field loss to Ramstein in 2014 and a stunning semifinal loss to Lakenheath in 2016, Kaiserslautern brought a stacked roster into this spring, the last chance for its stalwart striker to win a championship.

“From the beginning we had a strong group of guys that were determined to win,” Dexter said. “We were all on the same page. We all knew we deserved it this year.”

The Raiders, spearheaded by what coach Enrique John called Dexter’s “electric” presence on the front line, played like the champions-in-waiting they believed themselves to be. They routinely routed overmatched opponents in an undefeated regular season and cruised through the tournament bracket as an unassailable top seed.

The only team to give the Raiders any measure of trouble was Ramstein. Kaiserslautern eked out a one-goal win over its local archrival on March 30, its first game of the season, and encountered the Royals again in its last game of the season, the May 20 championship match. There the Raiders faced the closest thing to a crisis they had experienced all season when the Royals took an unexpected 1-0 lead.

But Dexter had “matured a lot” over his time at Kaiserslautern, and his team had followed his lead. The poised Raiders responded with a flurry of goals that fueled a 3-1 victory and left no doubt as to the dominant team of this DODEA-Europe soccer season.

“Everybody looked calm. Nobody looked nervous,” Dexter said. “We just kept our game going. We knew eventually we would break them.”

Though he narrowly missed scoring a goal in the final, Dexter’s relentless pressure was an undeniable catalyst for the comeback. Another goal on his individual tally was hardly needed to validate a season in which he totaled 21 goals and 19 assists, including the regular season and tournament.

After four years of steady hard work, that’s exactly how it worked out for Dexter and the Raiders.