Defending champs own the course again 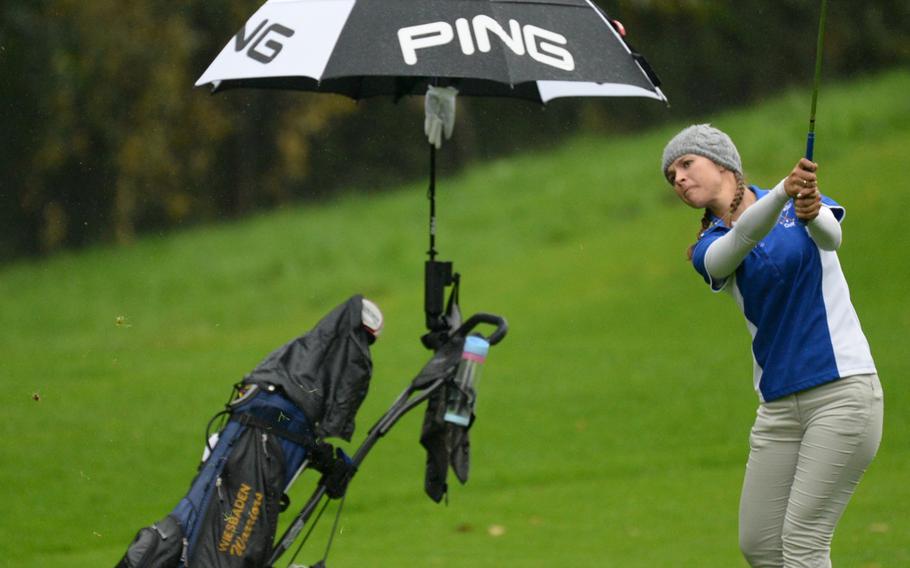 Jenna Eidem of Wiesbaden completed her high school golf career Thursday by winning the DODDS-European championship for the fourth time. She totaled 88 points in the two-day event, almost double the total of runner-up Leigha Daryanani of Bitburg. (Jennifer H. Svan/Stars and Stripes)

Jenna Eidem of Wiesbaden completed her high school golf career Thursday by winning the DODDS-European championship for the fourth time. She totaled 88 points in the two-day event, almost double the total of runner-up Leigha Daryanani of Bitburg. (Jennifer H. Svan/Stars and Stripes) 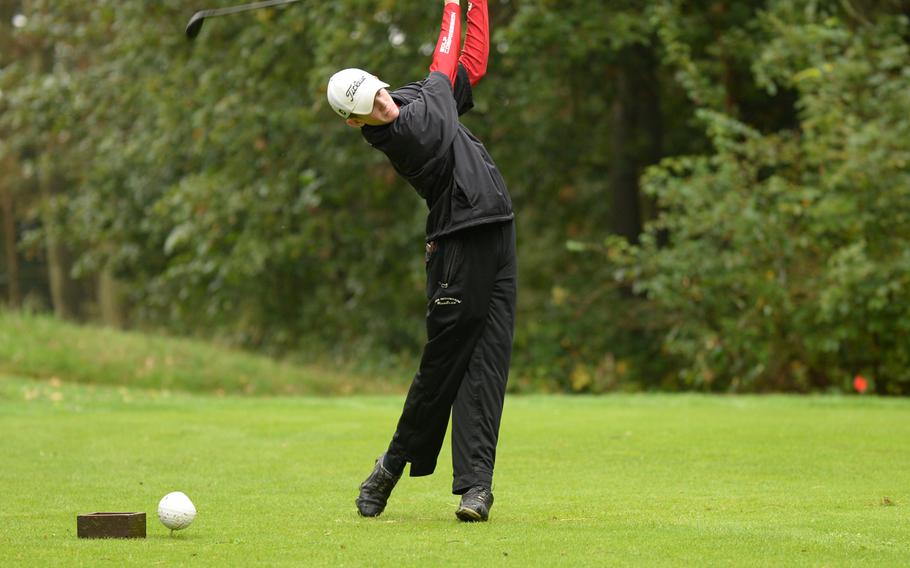 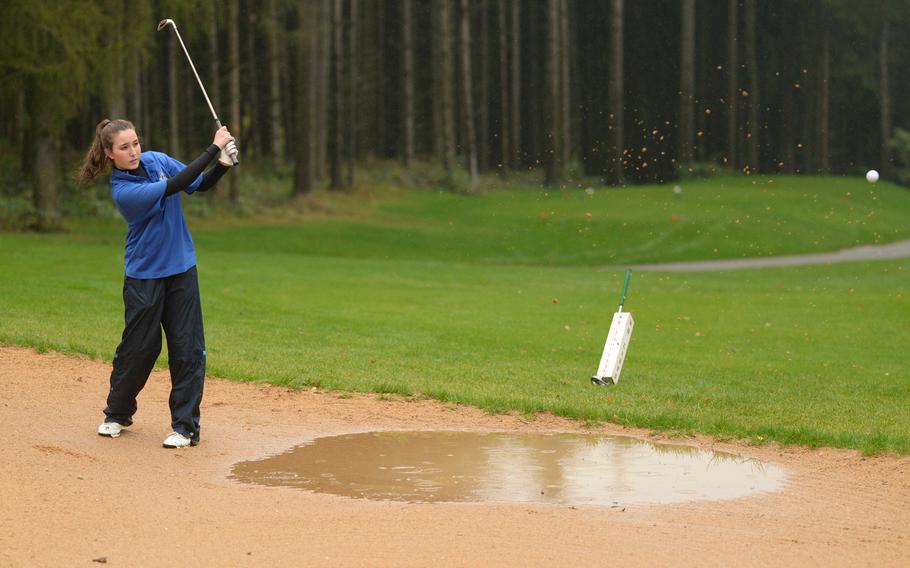 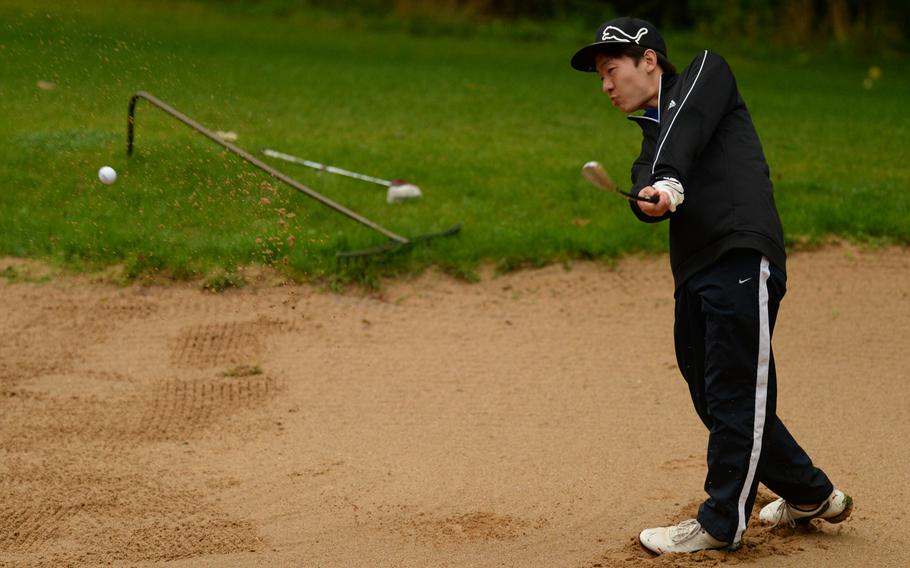 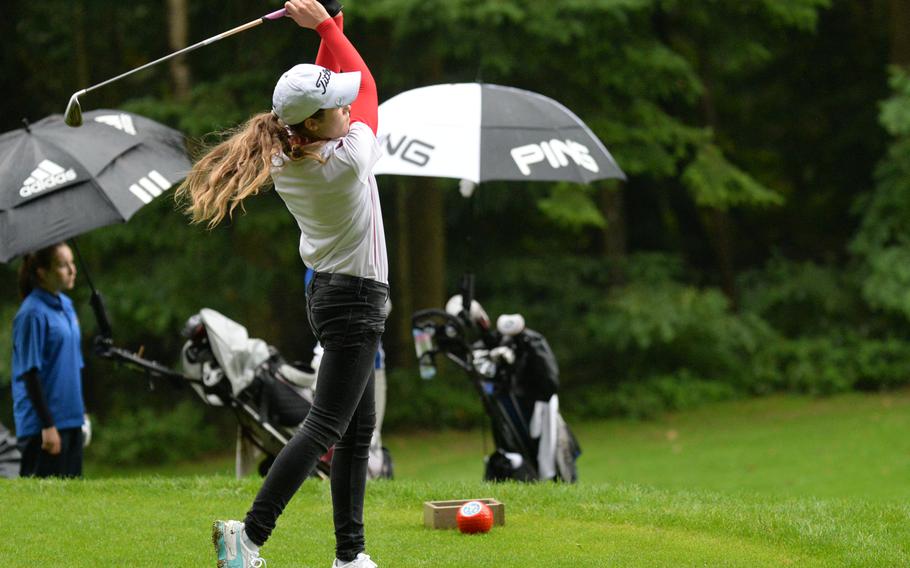 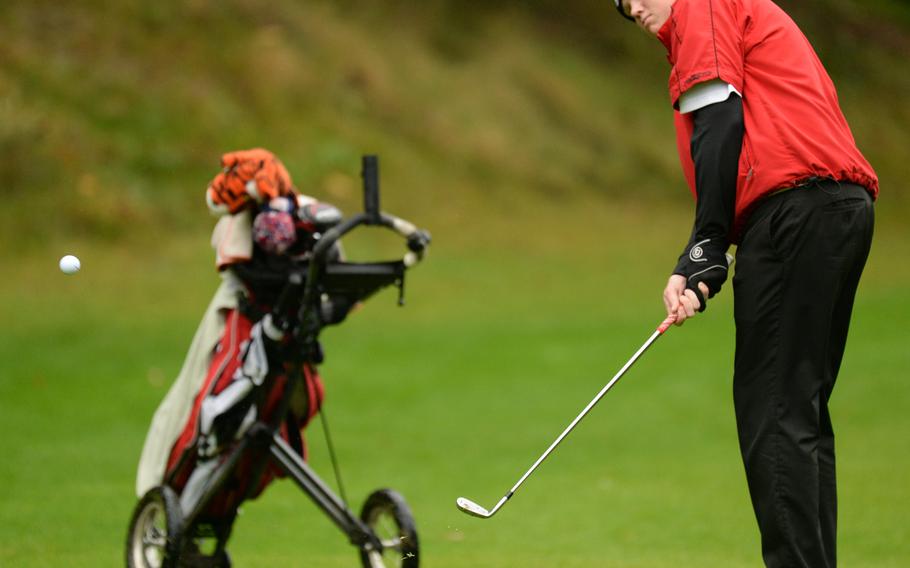 WIESBADEN, Germany -- The participants in the 2014 DODDS-Europe golf championship tournament took a couple of days away from the classroom for the event.

So two of their peers schooled them instead.

Jenna Eidem of Wiesbaden and Jordan Holifield of Patch built on first-day advantages Thursday on the way to successful defenses of their individual European titles.

Eidem completed her high-school golf odyssey with her fourth consecutive championship. This final one was the most comfortable yet; Eidem built a 20-point lead in Wednesday's first round and pulled even further away Thursday.

Eidem was elated to collect her fourth title, no matter how preordained it seemed.

But she was overcome with the finality of her last DODDS-Europe round.

"Four years ago I never, ever thought this would happen," a tearful Eidem said. "I'm so happy."

Eidem said the presence of the Warrior boys team and their shared aspirations made this fourth win special.

"This one's the best because I have my team with me," Eidem said.

The sophomore Holifield is now halfway to matching Eidem's four-year feat with his second title in as many DODDS-Europe seasons. He made good on his own first-day lead, expanding a four-point lead through 18 holes to nine points through Thursday's front nine. He finished with 101 points, 10 in front of Wiesbaden’s Noah Shin.

A year after mounting a second-day comeback to claim the title, Holifield excelled playing out in front this week.

"You still come out here with the same mindset, same objective," Holifield said. "Just getting the ball in the hole in as few shots as possible."

While the score didn't change his approach, the miserable weather certainly did.

"Whenever the rain started getting heavier, the wind started picking up, you kind of have to change your whole strategy," Holifield said. "It kind of messes you up a bit."

Though the old guard defended its turf Thursday, future DODDS-Europe contenders gained valuable experience over the 36 holes. While none of them managed the ninth-grade heroics of Eidem and Holifield before them, a number of freshmen fared well in the tournament.

Bitburg's Leigha Daryanani and Kaiserslautern's Jasmin Acker joined Eidem in the final group, while Vicenza's Hunter Leclair gave Holifield cause for concern with a strong third-place showing at 88 points.

Eidem won with 88 points ahead of Daryanani’s 46.

A longtime swimmer, Daryanani has only recently begun to seriously pursue golf.

She was validated by her performance this week and looks forward to potentially replacing Eidem as the girls ace of DODDS-Europe.

"A couple of years ago I could barely hit the ball, and now I'm hitting it a lot farther and more accurately," Daryanani said. "You've just got to put the time and effort into it."

Her championship hopes, however, would have to wait until Eidem played out her reign.

"She's such a great player. I totally look up to her," Daryanani said of Eidem, who also had complimentary words for her young challengers. "But her scores are really, really high. It's really challenging."

Wiesbaden fell just short of a sweep in the team race. The boys won with 286 points, well ahead of runner-up Bahrain’s 185. But Kaiserslautern’s Acker and Ana Duenas scored 45 points apiece to give Kaiserslautern a 90-88 edge over Eidem’s one-person Warrior girls team.