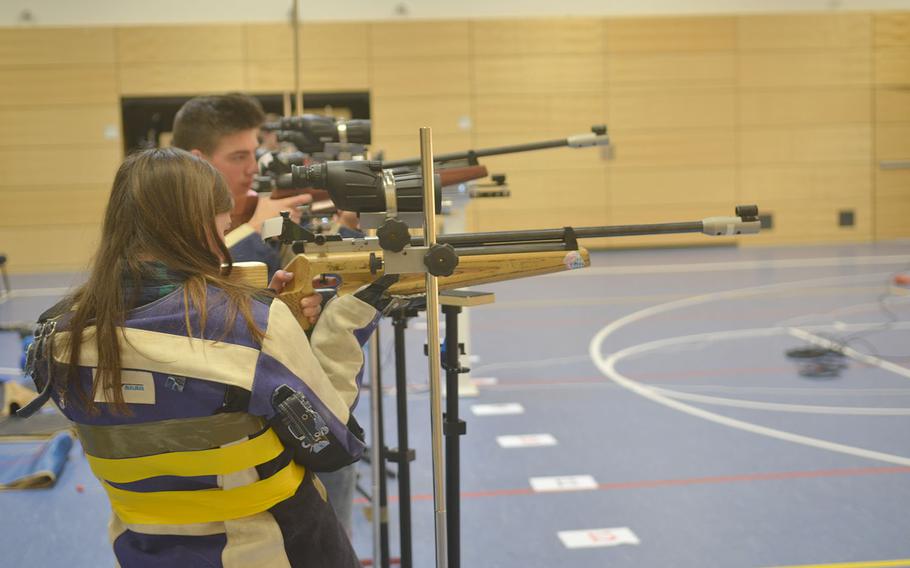 The final weekend of the 2018-19 DODEA-Europe marksmanship regular season accomplished exactly what one would hope a regular-season finale might: ramp up the intrigue for the postseason. On Saturday, reigning dynasty Stuttgart was outscored for the first time since the opening day of the season, with the caveat that the teams were competing in two different meets. The Kaiserslautern Raiders scored 1,113 points in their Western Conference meet, while Stuttgart won the Eastern Conference meet with 1,110. That’s a similar outcome as the Dec. 1 pair of openers, when Kaiserslautern scored 1,109 to Stuttgart’s 1,090. Again, those scores were produced in separate meets; the organization’s regional regular-season divide has kept the two frontrunners from competing shoulder-to-shoulder this winter. That changes Saturday, as Wiesbaden hosts a championship meet that is both the first championship event of the DODEA-Europe calendar year and the final chapter of a fascinating marksmanship season. The defending five-time champion Panthers entered the season facing uncharacteristic uncertainty, having lost all five of the standout varsity shooters that led the way to its runaway 2018 triumph. While it wasn’t a loss, the opening-weekend effort cast the school’s ongoing dominance in further doubt. Kaiserslautern, boosted by Stuttgart transfer Isabelle Ploechinger, had the look of an ascendant champion. But Stuttgart’s new crop of shooters was undeterred, and slowly reestablished the longstanding status quo. The Panthers scored 1,116 points on Dec. 8 as Kaiserslautern slipped entering the holiday break; Stuttgart's Eastern Conference contemporaries Ansbach and Vilseck also surpassed the Raiders' 1,084-point outing that day. In a Jan. 19 remote meet, Stuttgart produced a total of 1,136 that was the highest output by any team this season, seemingly restoring its aura of invincibility. Until last weekend, that was. While the Panthers turned in a solid 1,110 that would have exceeded Kaiserslautern any other week of the season, the Raiders surged for a 1,113-point showing that infused the European championships with fresh unpredictability. A strong 1,106-point finale effort from Wiesbaden, the championship meet host, opened even more interesting possibilities.broome.gregory@stripes.com Twitter: @broomestripes