Cougars in a position to succeed entering European volleyball tournament 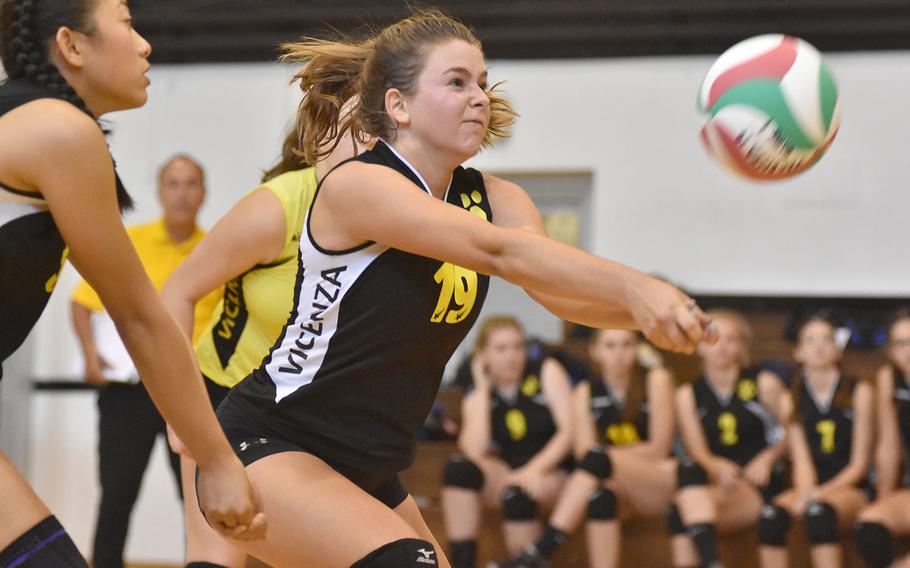 The Vicenza Cougars are in an ideal position to again contend for a European girls volleyball championship, in large part because their players are in ideal positions. It’s not unusual for coaches to shift players around the court as their individual strengths and weaknesses become apparent. The Cougars have done just that this fall. “We actually are trying new things and moving people into positions they can be more successful at,” Vicenza coach John Kohut said. Junior Julia Lombardi has shifted from her traditional spot at middle hitter to outside hitter, where she’s complemented by sophomore Madeline Mollner. Lombardi’s shift has cleared space for junior Chenoa Gragg, who Kohut said “has become more aggressive going after the ball to hit and block as well.” That imposing front line is supported by speedy defensive specialist Illyana Azurin, libero and ace server Emilee Deck and new setter Julia Ridgley, an instantly impactful freshman honed by years of experience against local Italian competition. The end result is an optimized lineup that maximizes each member’s unique skill set, an arrangement that Kohut said offers the added boost of “more confidence” from players put in a position to succeed. And that success has been considerable. Vicenza owns an 11-2 overall record entering the final weekend of the DODEA-Europe regular season and hasn’t lost a match in over a month. Should they continue that streak against visiting Aviano and American Overseas School of Rome this weekend, the Cougars will likely enter the Division I European tournament as a high seed with a chance to match or surpass the achievements of the program’s 2015 European runner-up squad. Standing in the Cougars’ way are Ramstein and Stuttgart, both undefeated and likely to stay that way entering the tournament. Vicenza lost to both in the opening weeks of the season, though they took Ramstein to a maximum five-set showdown on opening day. But the Cougars team entering the postseason is a better version of the one that entered the regular season. “That was tough,” Kohut said of those early-season setbacks. “We have improved.”broome.gregory@stripes.com Twitter: @broomestripes