Champs as freshmen, duo will try to defend titles 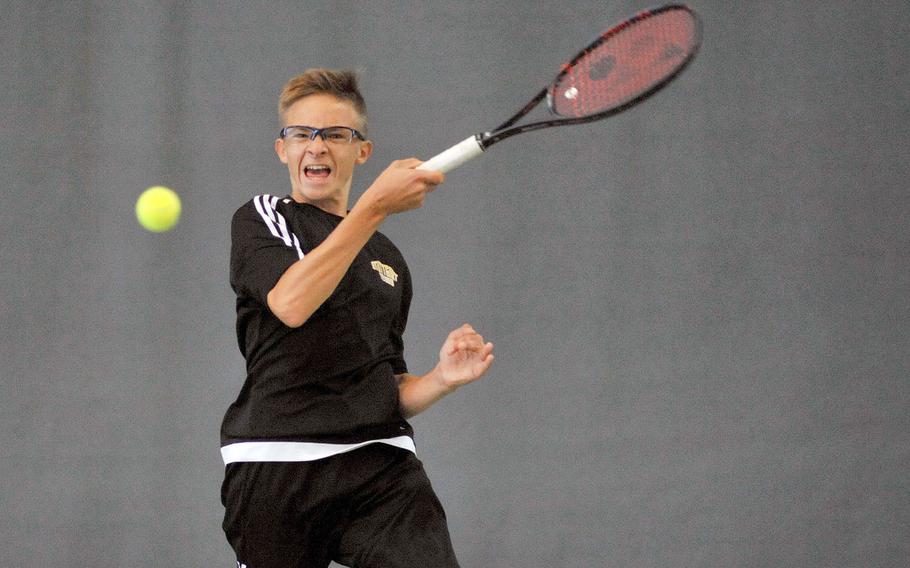 Stuttgart's Amar Tahirovic returns a shot in last year's boys final at the DODEA-Europe tennis championships in Wiesbaden, Germany, in October. Tahirovic will be back for the Panthers this season to try to defend his title. (MICHAEL ABRAMS/STARS AND STRIPES)

Stuttgart's Amar Tahirovic returns a shot in last year's boys final at the DODEA-Europe tennis championships in Wiesbaden, Germany, in October. Tahirovic will be back for the Panthers this season to try to defend his title. (MICHAEL ABRAMS/STARS AND STRIPES) Kaiserslautern's Aiva Schmitz watches her return fly over the net in last year's girls final at the DODEA-Europe tennis championships in Wiesbaden, Germany, in October. Schmitz will be returning to defend her title when the 2019 season gets underway. (MICHAEL ABRAMS/STARS AND STRIPES)

The freshman phenoms of DODEA-Europe have become established tennis champions.

Stuttgart’s Amar Tahirovic and Kaiserslautern’s Aiva Schmitz, each of whom seized singles titles last year in straight-set finals triumphs, return this fall as sophomores poised to add to their burgeoning trophy cases. Their concurrent title defenses are the main attraction of the 2019 DODEA-Europe tennis season, which opens with a seven-meet slate on Saturday and runs through the European championship tournaments Oct. 24-26 in Wiesbaden, Germany.

Tahirovic, the younger brother of former DODEA-Europe champion Ajdin Tahirovic, took his place atop the division last fall with a dominant debut season. The freshman knocked off reigning champion Matthias Mingazzini of Marymount 6-4, 6-2 to secure the title.

It remains to be seen who Tahirovic’s primary challengers will be. Seasoned performers such as Wiesbaden’s Benjamin Petrik, Sigonella’s Lawrence Caro, Ramstein’s Connor Markus and SHAPE’s Seth Banken are among those who will spend the fall auditioning for the role.

On the girls side, Raider Aiva Schmitz claimed the vacant DODEA-Europe title last October with an overwhelming fall season capped by a 7-5, 6-1 victory in the singles final. While she enters her sophomore season an overwhelming favorite to repeat as champion, Schmitz will face plenty of competition.

Wiesbaden junior Charlotte Kordonowy has been on the cusp of a title breakthrough throughout her high school career, settling for second-place finishes in each of her first two European tournaments. Her continued title chase is just one item of interest for a promising Warriors squad that also has a girls doubles championship to defend.

The new Warrior pair will have to again contend with Kaiserslautern’s Victoria Thais-Lopez, who reached the European doubles final as a freshman last year and expects to team with senior Gabby Ramirez as the Raiders make a push to sweep the girls singles and doubles crowns.

Ramstein, meanwhile, will field a new contender of its own in projected singles ace Kassi Von Eicken.

As the larger schools look to sort out their singles and doubles hierarchies, lower-division DODEA-Europe programs such as AFNORTH, Hohenfels, SHAPE, Sigonella and Vicenza have been boosted this fall by strong preseason turnouts and steady improvement.