Baseball teams battle elements, each other 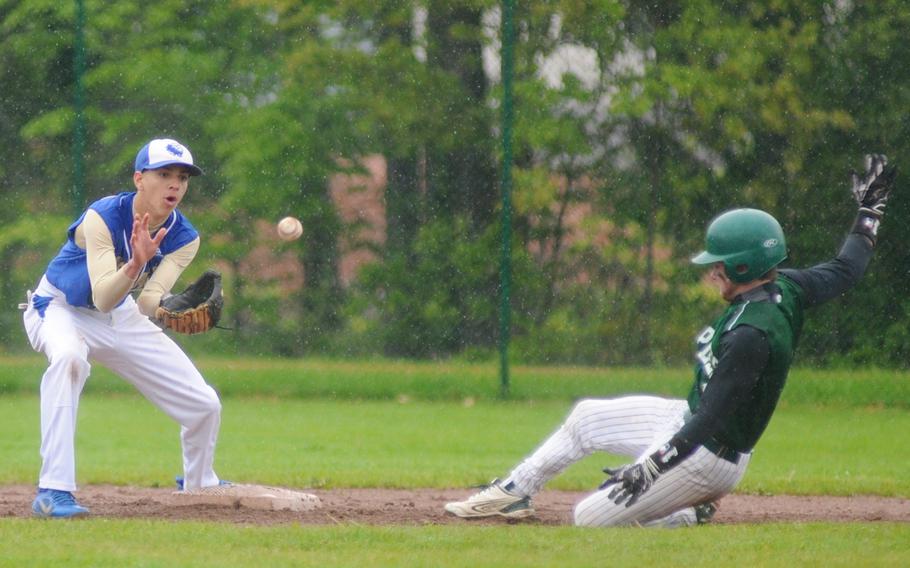 Naples' Kyle Baldree slides safely into second base as Ansbach's Onix Alicea catches the ball during the first day of the 2013 DODDS-Europe Baseball Championships at Ramstein Air Base, Thursday. Naples won the game 15-6. (David Rogers/Stars and Stripes)

RAMSTEIN AIR BASE, Germany – In an unusual format, the top two teams in the Division II/III portion of the DODDS European Baseball Championships faced off in the first round Thursday.

The two teams are actually the only two teams in the pool, so both were automatically set to advance to Friday’s quarterfinals. Thus the game ended up being for seeding purposes. There are nine other teams spread out among three other pools, with the top two from each of the others set to join Ansbach and Naples in the next round.

But there are still plenty of games left before that happens. At least if the weather cooperates.

Much of the day's games were doused in cold rain causing multiple delays and pushing four of the day's scheduled games to Friday and prompting officials to come up with some backup plans in case the weather doesn’t improve.

While the Naples-Ansbach game itself wasn't delayed by the weather, the bitter, cold rain did span through nearly half of the game.

Naples coach Duke Marlow said the weather had a heavy impact on the game and credited his deep pitching staff for the victory. Marlow says his team has seven pitchers and he used five of them in the game, which ran nearly an hour longer than expected.

"We didn't come out and attack the ball as well as we can, but we did hit the ball when we needed to hit it," Marlow said. "And we capitalized on some of their errors today."

Marlow said he has a lot of respect for Ansbach, which compiled a 9-3 record during the regular season that included several games against Division I opponents.

"Nobody understands how hard it is to not get to play Division 1 teams when you're in Naples, Italy," Marlow said. "So we don't know their pitching staffs. We don't know what they do. They certainly don't know us. And there's just so many good teams up here that we don't get to play." Marlow’s team received some compliments as well.

"Today's game was a great view of what Naples is bringing to the table out of Italy." Ansbach coach Chris York said. "Good, solid baseball team. I don't think either team showed their cards today, because we expect both these teams to be in the championship. I think that we'll meet them again. I'm looking forward to it."

Vicenza, the No. 3 seed, beat Schweinfurt 8-5 and beat Bitburg 11-4 as well. The Cougars’ game against Bitburg was suspended due to the weather around 1 p.m. while they were up 3-0. After more than two hours of delay, Vicenza returned to the field and scored eight more runs and coach Mark Wilson decided to save his pitchers by putting non-pitchers in place in the last inning to finish the game.

"The top end of our lineup just did a good job,” he said. “They were hitting all the time. So we scored every time they came to the plate."

"We should advance one more game, but then we're going to be facing Naples or Ansbach and they're the powers," Wilson said. "We're familiar with Naples, we know that they're very good. I don't know Ansbach, but their record speaks for itself."