Bamberg teams too much for Hohenfels 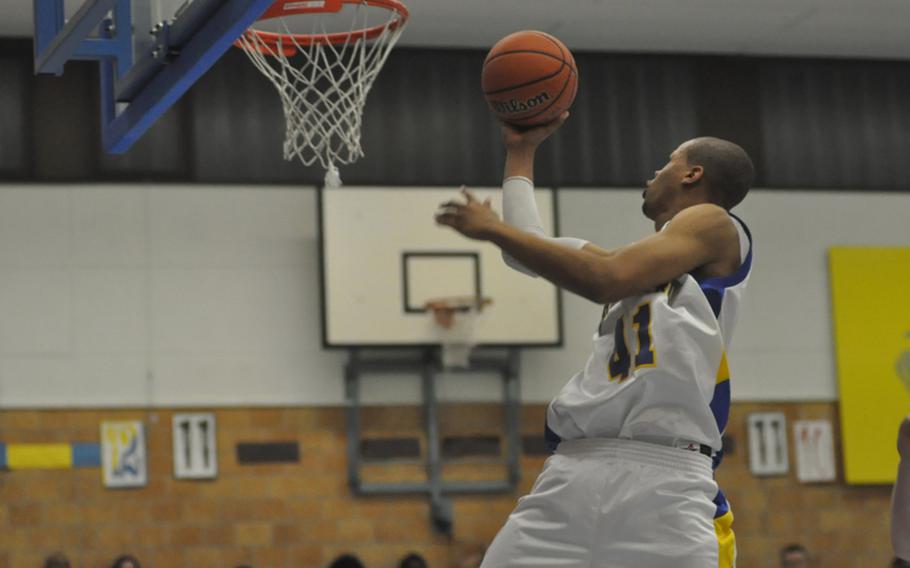 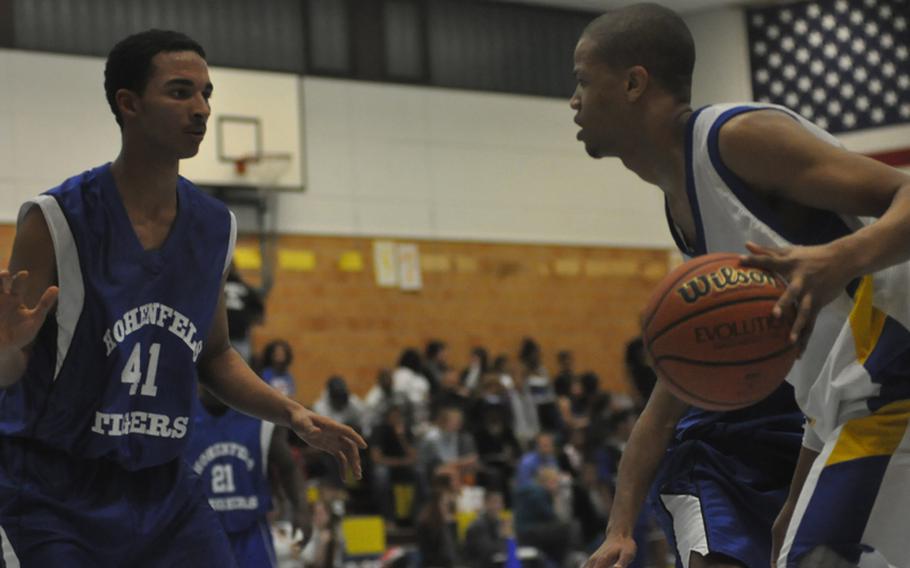 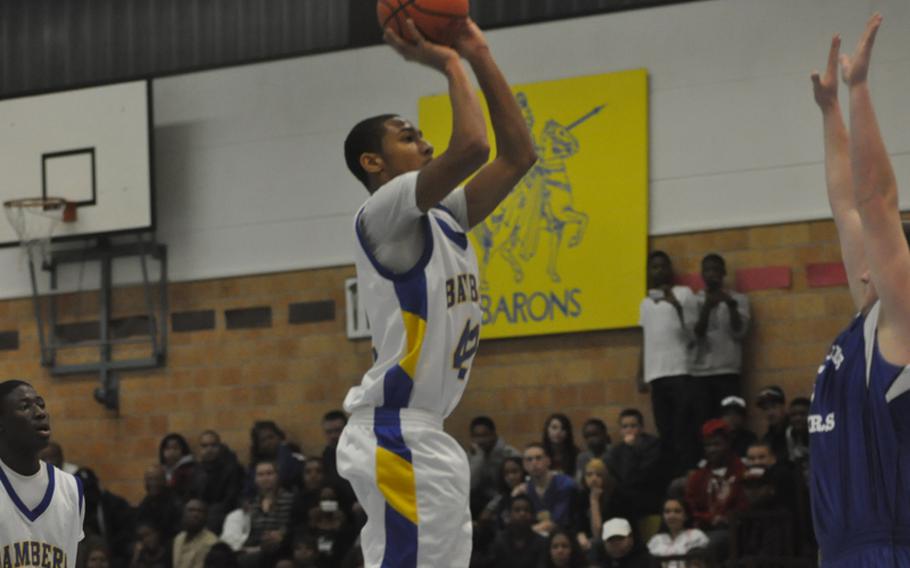 Bamberg's T.J. Courtright goes up for a jump shot Friday in the Barons' 68-51 win over visiting Hohenfels. Courtright scored 28 points and had 12 rebounds. (Dan Blottenberger/Stars and Stripes) 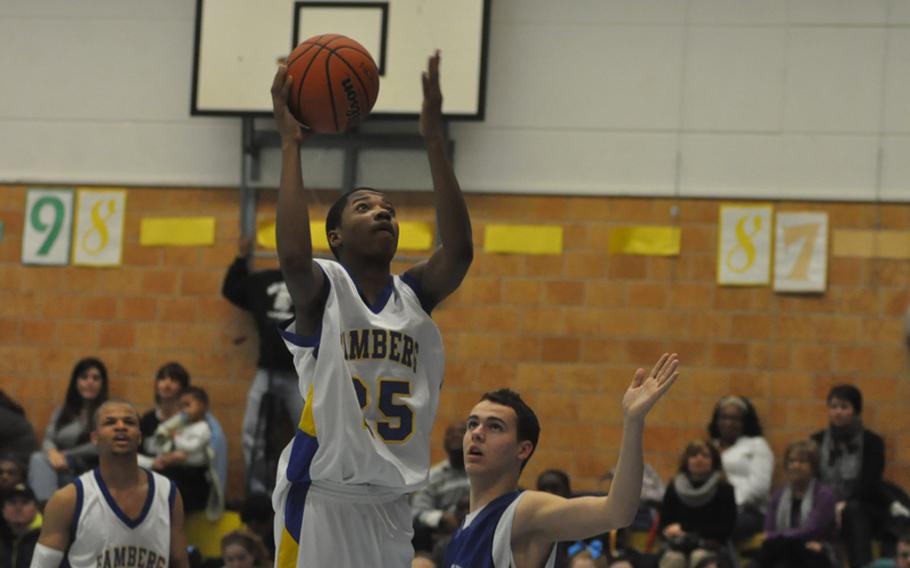 Leontae Lockett goes up for a layup Friday in Bamberg. The Barons won 68-51 against the visiting Hohenfels Tigers. Lockett, on his first game back from injury, scored 8 points. (Dan Blottenberger/Stars and Stripes) 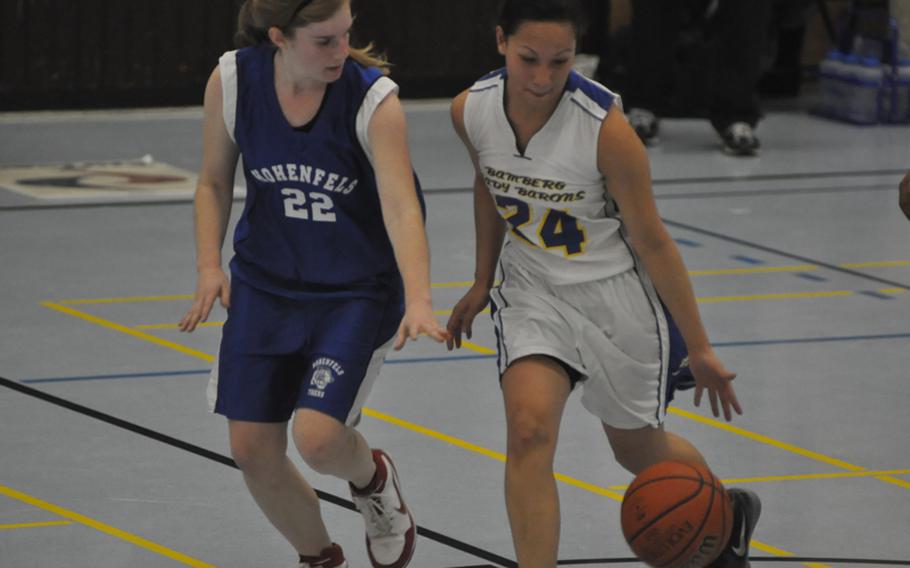 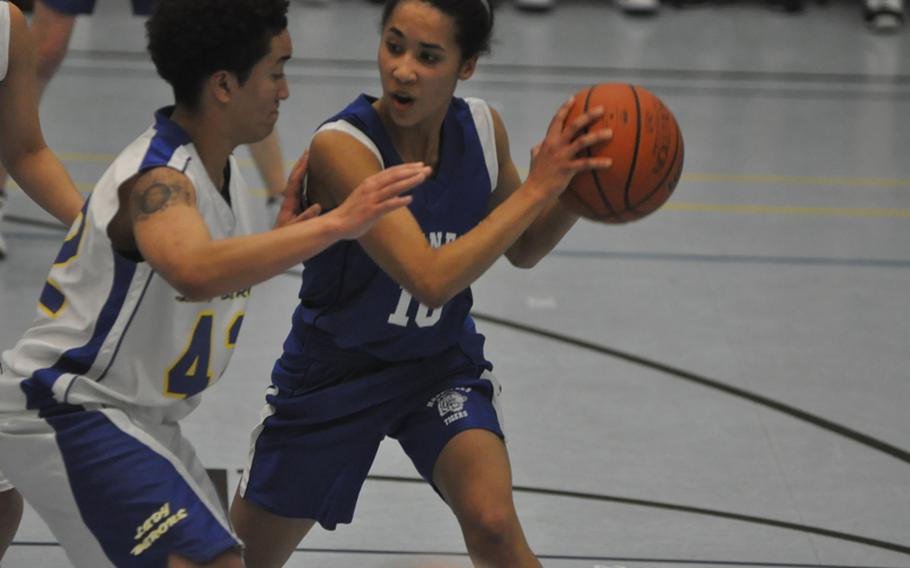 Kiana Glenn of the Hohenfels Tigers tries to pass the ball around Vanessa Sanders of Bamberg Friday night in Bamberg. The Lady Barons won the game 41-31. (Dan BLottenberger/Stars and Stripes) 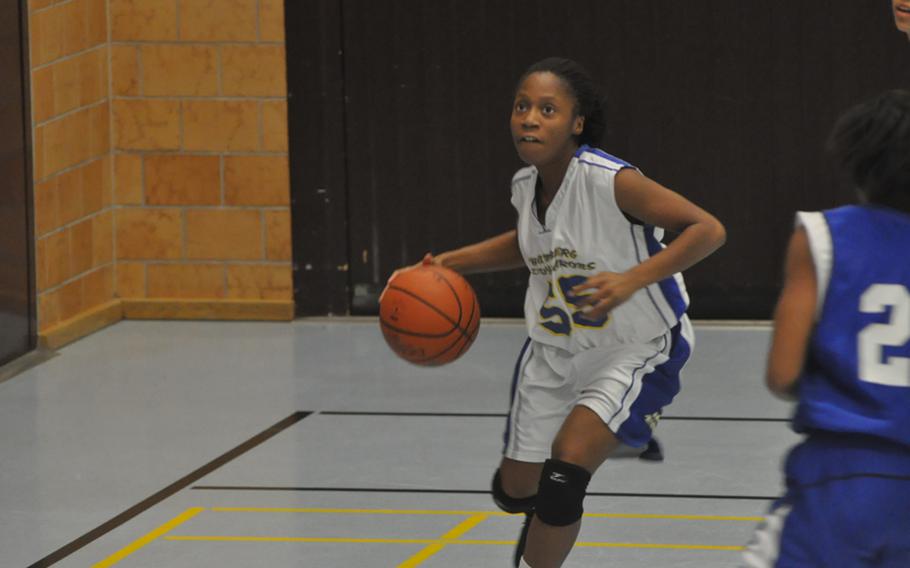 Sophomore Tiana Bowen of Bamberg makes her way to the basket Friday night in the Lady Barons 41-31 win over the visiting Hohenfels Tigers. Bowen scored 12 points for her team. (Dan Blottenberger/Stars and Stripes)

BAMBERG, Germany &ndash; The Bamberg Barons were explosive Friday night in the form of some &ldquo;T&T teamwork&rdquo; - a nickname for T.J. Courtright and Terry Williams - who combined for 42 points and 21 rebounds in a 68-51 victory over visiting Hohenfels.Despite the lack of such a nickname, the Lady Barons were dynamite themselves on defense, according to coach Dewayne Gamble following his team&rsquo;s 41-31 win.The much-needed victory improved the team&rsquo;s overall season record to 2-4 and Gamble was proud of his small team.&ldquo;We are the only small school and we are holding our own in our division,&rdquo; he said of the Division-III Barons.An unexpected star made some critical baskets for the Lady Barons. Sophomore Tiana Bowen, playing in her first season, was all over the court making steals and bringing in 12 points for her team. Bowen scored the first three points for her team and closed the half with a go ahead basket to put Bamberg on top 18-17 with a second remaining. The Tigers never regained the lead in the second half. &ldquo;I didn&rsquo;t think I could do it really. I&rsquo;ve been practicing so hard and it finally came through. I&rsquo;m just blessed,&rdquo; she said. She eventually fouled out in the fourth quarter. Natesha Godbee led the team scoring with 13 points and also fouled out. On the other side of the ball, Kiana Glenn and Tasia Golson scored 14 and 11 points respectively for the Tigers. In the boys game, Bamberg jumped out to a seven-point lead and never allowed Hohenfels to get back in the game. The Barons led 37-21 at halftime. Bamberg seemed to gather the majority of rebounds on both ends of the court, led by Courtright, Wiliams and Leontae Lockett.&ldquo;I was feeling hyped, I was feeling full of energy - my team kept leading me on,&rdquo; Courtright said.Bamberg Coach Tim Smith felt that the result was a real turning point for his team.&ldquo;We are starting to get people healthy again, we are starting to get a rotation of players going,&rdquo; he said. The Barons now have a seven-player rotation instead of a five- or six-man rotation that they had been using earlier this season.Lockett made an impression on his first day back from injury, Smith said.&ldquo;We are hitting shots and we are getting the ball inside,&rdquo; he said. &ldquo;We are getting better.&rdquo;The Barons play at Ramstein Saturday. Hohenfels is off before playing Heidelberg twice next weekend.blottenbergerd@estripes.osd.mil