Aviano's Jasmyne Hinkamp drives around Sigonella's Halie Gasporra and Katie Cauble on Friday in the Saints' 30-14 victory over the Jaguars. (Kent Harris/Stars and Stripes)

Aviano's Jasmyne Hinkamp drives around Sigonella's Halie Gasporra and Katie Cauble on Friday in the Saints' 30-14 victory over the Jaguars. (Kent Harris/Stars and Stripes) 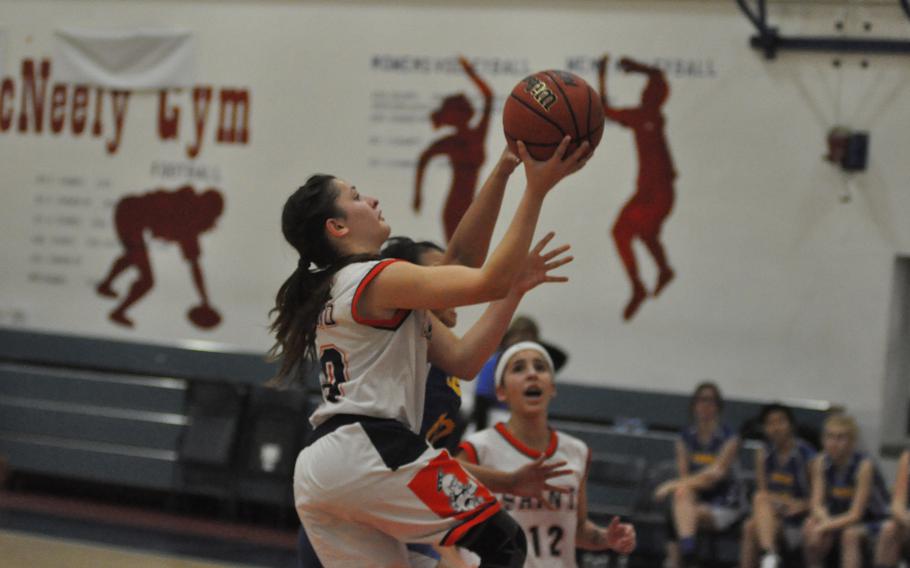 Aviano's Jasmyn Green scores on a layup after one of her 10 steals Friday night in the Saints' 30-14 victory over Sigonella. (Kent Harris/Stars and Stripes) 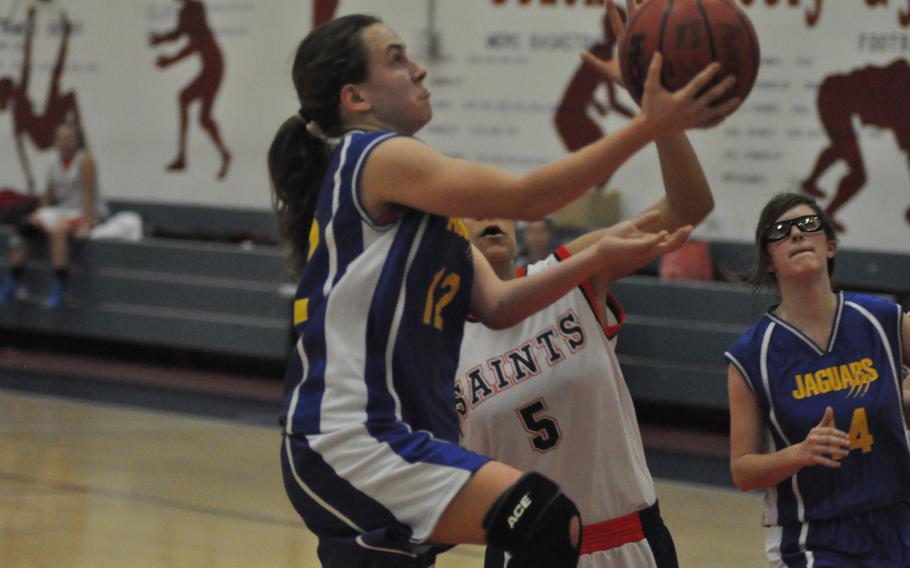 Sigonella's Kaite Cauble goes up for a basket Friday night in the Jaguars' 30-14 loss at Aviano. (Kent Harris/Stars and Stripes) Aviano's Jamal Thomas puts up a shot in the first half Friday night in the Saints' 45-41 loss to Sigonella. (Kent Harris/Stars and Stripes) Sigonella's Thomas Wray scores two of his eight points Friday night in the Jaguar's 45-41 victory over the Aviano Saints. (Kent Harris/Stars and Stripes)

Sigonella suited up seven players – only three of them taller than 6 feet – and shouldn’t really intimidate anyone while warming up before a contest.

“We do not,” Sigonella coach David Berlin said. “That’s why we don’t do anything fancy in warmups.”

The Jaguars didn’t do anything fancy during the game either. But they dominated the middle two quarters of play and then held on for a 45-41 victory to improve to 3-0 on the season.

“They out-hustled us,” Aviano coach Curtis Harris said. “They beat us to all the loose balls. They got the rebounds. I asked my players, ‘When are you going to start playing?’ They did, but they waited too late.”

Facing a double-digit deficit for much of the second half, the Saints actually had a chance to tie the game with 37 seconds left when Jamal Thomas came up with a steal, made a layup and went to the free throw line. But he missed it, leaving his team down 42-41.

Sigonella’s Chris Moore hit one of two free throws to put his team up by a basket. The Saints then had several opportunities to tie the game in the last few seconds, but couldn’t score.

Jon Gasporra iced the game for the Jaguars with a steal with just seconds left on the clock. He hit a layup and was hurt on the play, leaving the Jaguars with just five eligible players. Thomas Wray had fouled out in the third quarter.

But the four-point margin was more than enough with only 2 seconds left on the clock.

“We were getting close to running out of gas,” Berlin said.

The game provided a huge contrast in styles of play. Aviano took a three-point shot every two or three possessions. Almost all of them failed.

“They weren’t falling,” Harris said. “But we kept on taking them.” Sigonella, on the other hand, appeared to be allergic to firing from long distance. The Jaguars consistently worked for shots closer to the basket.

“I wish that line would be taken away,” Berlin said of the three-point perimeter. “If we’re not making layups, we’re not playing well.”

Moore led the way with 16 points and 11 rebounds for Sigonella, with Jason Berlin adding 10 points and eight boards. Every Sigonella starter had at least four rebounds, led by Gunnar Smith’s 13.

Alex Slabuagh had 11 points and Thomas 10 for Aviano, while Dundrey Peoples finished with nine and nine rebounds.

It was the first home boys game in Aviano history that longtime coach Ken McNeely wasn’t on the sidelines. He retired at the end of last school year after heading the program since 1974.

“It’s tough following in those footsteps,” said Harris, who coached at SHAPE before coming to Aviano last year.

Aviano girls cruiseThe Saints lead DODDS in most Jasmines per capita. Or at least some variety of that spelling. And just about all five of them played roles in Aviano’s 30-14 victory over Sigonella.

Jasmyn Green, at 5 feet, 3 inches, had the largest impact. She finished with 12 points, 10 steals and directed the Aviano offense.

With a 23-8 advantage at halftime, that offense went south in third period. Sadie Hellwig’s basket with 50 seconds left was the team’s first points. But Sigonella was actually worse, managing just a point in that period.

“We’re really trying to be a defensive team,” Saints coach Laura Corder said. She wasn’t happy with the team’s half-court offense, though. “We didn’t score much except for layups after steals.”

The game marked Corder’s home return to the sidelines after taking eight years off. She had coached the Aviano girls for the 12 previous years. This year’s squad appears to reflect her coaching style.

“Maybe too aggressive,” she said with a smile.

Aviano didn’t own all the aggressive play. Sigonella’s Sydney Moore scored only one basket. But she hauled in a game-high 17 rebounds. And Katie Cauble had five steals and a team-high five points.