Aviano’s Harkley commits to New Mexico on a track scholarship 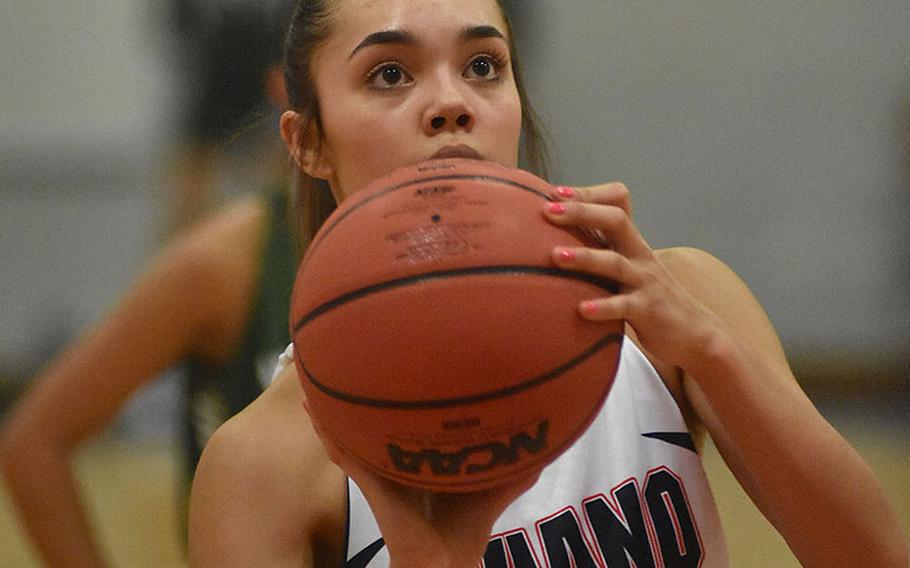 Buy Photo
Aviano's Mikyla Harkley spent a lot of time at the free throw line Friday, Jan. 31, 2020, converting nine of 11 attempts. She finished with 19 points, 14 rebounds and seven steals in the Saints' 41-30 victory over Naples. (Kent Harris/Stars and Stripes)

AVIANO AIR BASE, Italy – In the two seasons she got to compete, Mikyla Harkley was named first team All-Europe.

The 5-foot-8 Aviano senior received those honors following the 2019 volleyball season and the 2019-20 basketball season. But similar to the rest of her peers attending Department of Defense Activity-Europe schools, Harkley hasn’t gotten to compete again – thanks to the coronavirus pandemic.

So fans in Italy and elsewhere might not get to see her in what she considers her best sport: track and field.

“That’s where my passion is,” said Harkley, who recently signed a National Letter of Intent to compete on the women’s track team at the University of New Mexico on scholarship next fall.

The spring season was wiped out her junior year and though DODEA-Europe has announced plans to hold a virtual track and field championship this year, Aviano’s students are currently in remote learning.

Harkley plans to compete in the long jump and triple jump for New Mexico, which has built a strong reputation in recent years in distance events.

The Harkley family moved from New Mexico to Aviano in 2019. Mikyla’s father, Mitchell, is serving a three-year stint in northern Italy with the Air Force.

Harkley said she has not toured the campus, but she is familiar with the Division I university’s track stadium. She competed there in two state championships and took first in the triple jump with a leap of 38 feet, 4 inches as a sophomore attending Clovis High School.

Whether she gets an opportunity to go after the DODEA-Europe record – 39-6, set by Kaiserslautern’s Jada Branch in 2018 – is an open question.

But Harkley said she’s been working out with an Italian club three days a week so she could be in decent form if the situation improves.