AOSR crashes DODDS party with a pair of victories 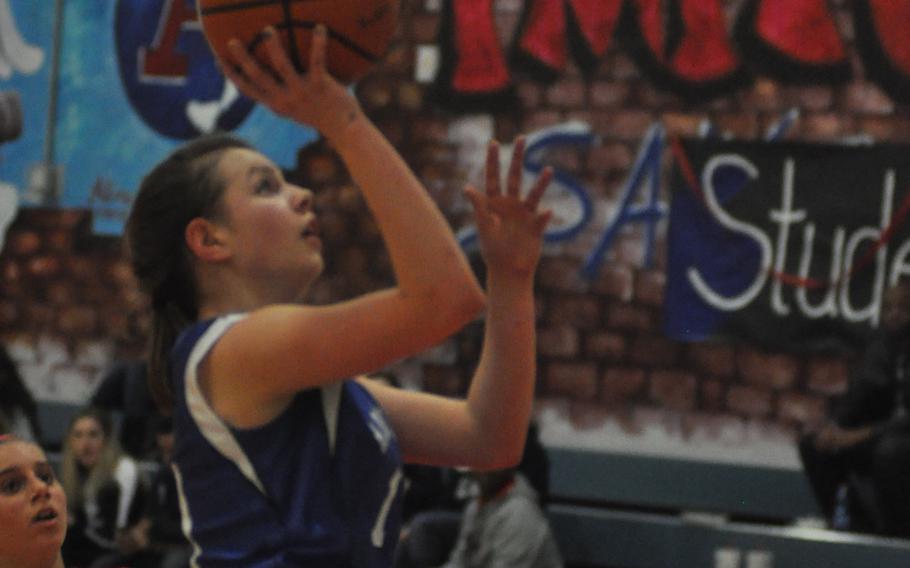 Hohenfels' Shelby Atkinson scores two of her 18 points Friday night in the Tigers' 41-40 loss to American Overseas School of Rome at Aviano Air Base, Italy. (Kent Harris/Stars and Stripes)

AVIANO AIR BASE, Italy – DODDS-Europe sent seven of its schools out of Germany this weekend to give its counterparts in Italy, England and elsewhere some varied competition.

But the school that might have benefited the most from the move isn’t actually a part of the Department of Defense Dependents Schools system.

American Overseas School of Rome, which has been competing with its DODDS peers for decades, joined a four-school event at Aviano and took full advantage Friday.

Maria Carmela Verardi watched her girls team stage an improbable and stirring 41-40 victory over Hohenfels in one of the best games of the DODDS season. Hohenfels’ Amelia Heath missed the second of two free throws with 0.2 seconds left that could have tied it after getting fouled on a layup attempt that almost went in.

Then, Verardi watched her son, Otis Reale, put together one of the most dominant performances of the season as the Falcons blitzed the undermanned Tigers 57-17. Reale, a sophomore point guard, burned the nets for 33 first-half points and scored another basket in the first minute of the second half that officially ended the game because of the mercy rule.

AOSR girls 41, Hohenfels 40: The Tigers, behind the hot shooting of Shelby Atkinson, dominated the first half, leading 14-4 after a quarter and 27-14 at halftime. But Atkinson, who connected on her first seven shots, ran into foul trouble, and Hohenfels turned the ball over 36 times.

The comeback win also might be attributed to Verardi’s colorful style on the sideline. A barrage of comments – all in Italian – served to keep her team’s attention to the game plan.

“My comments help them to keep fighting and not give up,” said Verardi, a former player and coach from Italy’s Serie A who took over the team early in the season.

Hohenfels led until Cook’s offensive rebound and basket gave AOSR the lead at 34-33. Just more than a minute later, Atkinson fouled out, and the Tigers looked like they were in trouble. But Heath took the team on her shoulders and kept it in the game. She hit five straight free throws before her final shot missed the mark and finished with a team-high 10 rebounds.

AOSR boys 57, Hohenfels 17: The Tigers, down three players who began the season as starters, were never in a game that marked the Falcons as a contender for the Division II title.

Reale took advantage of the depleted backcourt with a variety of driving layups and three-point shots. He and senior teammate Greg China combined for all but six of the team’s 53 first half points.

Reale’s lob to China on a fast break resulted in a three-point play that pushed the lead to 31-11 with 5:27 left in the second quarter, and the rout was on.

China finished with 16 points, including a dunk, for AOSR.

Aviano girls 29, Ansbach 13: The Saints almost pitched a shutout in the first half against the Cougars, only giving up a pair of baskets in the final minute – after center Cassandra Awalt went to the bench with four fouls.

Ansbach, which turned the ball over 36 times, was down 12-4 at halftime, and Aviano blew the game open with a 13-0 third period.

“We went almost the whole first quarter without shooting the ball,” coach Myra Taylor said. “You can’t win that way.”

Much of that was due to Aviano’s relentless pressure defense. The game could have been much more lopsided if the Saints hadn’t missed more than a dozen layups after steals.

“I’m happy with the press,” Saints coach Laura Corder said. “That’s all we did well. Maybe we rebounded well, but that was only because we missed so many shots.”

Aviano boys 55, Ansbach 45: The Saints led for almost the entire game but didn’t show enough energy for coach Curtis Harris until opening the second half with an aggressive play they didn’t demonstrate earlier.

“They finally figured out -- this team is not going to roll over on us,” Harris said. “I keep telling them: You can’t just watch the game.’”

Brandon Vigil had 20 points for the Saints, which turned a 26-20 halftime edge into a 42-27 advantage heading into the final quarter. Dundrey Peoples added 10 points and a team-high nine rebounds.

Ansbach coach Ashley Spoor was impressed with the Saints’ pressure.

“This is the first time we’ve played against a team that’s pressured us like that all game,” she said. “So it was good for us, and I think we learned some lessons.”

Ansbach takes on AOSR and Aviano faces off against Hohenfels in Saturday matchups.