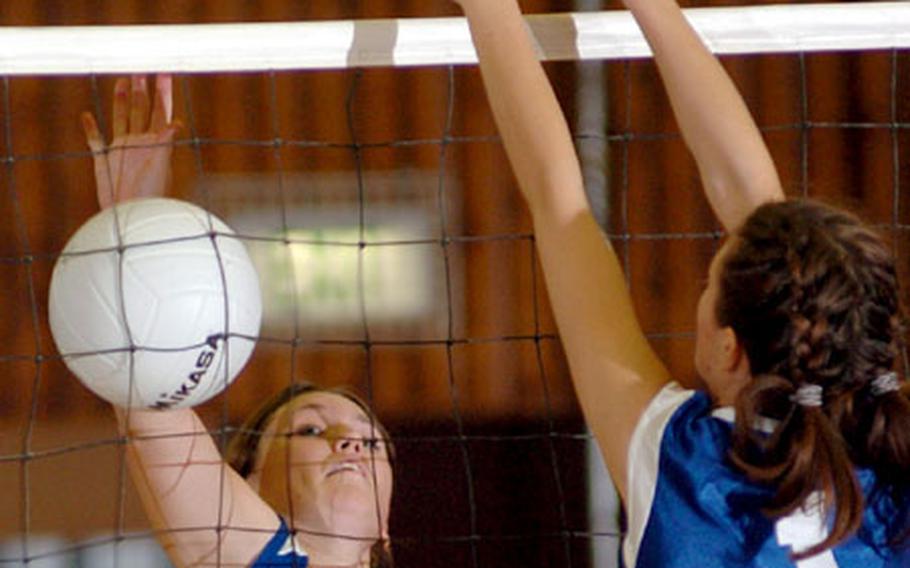 Lajes&#39; Colleen Koonst, left, attempts a spike against Brussels&#39; Viktorija Juciute during a quarterfinal game of the DODDS Europe volleyball championships in Kaiserslautern, Germany, on Friday. Lajes defeated Brussels 25-22, 20-25, 15-10 to advance to the semifinals against Milan. (Raymond T. Conway / S&S)

Lajes&#39; Colleen Koonst, left, attempts a spike against Brussels&#39; Viktorija Juciute during a quarterfinal game of the DODDS Europe volleyball championships in Kaiserslautern, Germany, on Friday. Lajes defeated Brussels 25-22, 20-25, 15-10 to advance to the semifinals against Milan. (Raymond T. Conway / S&S) 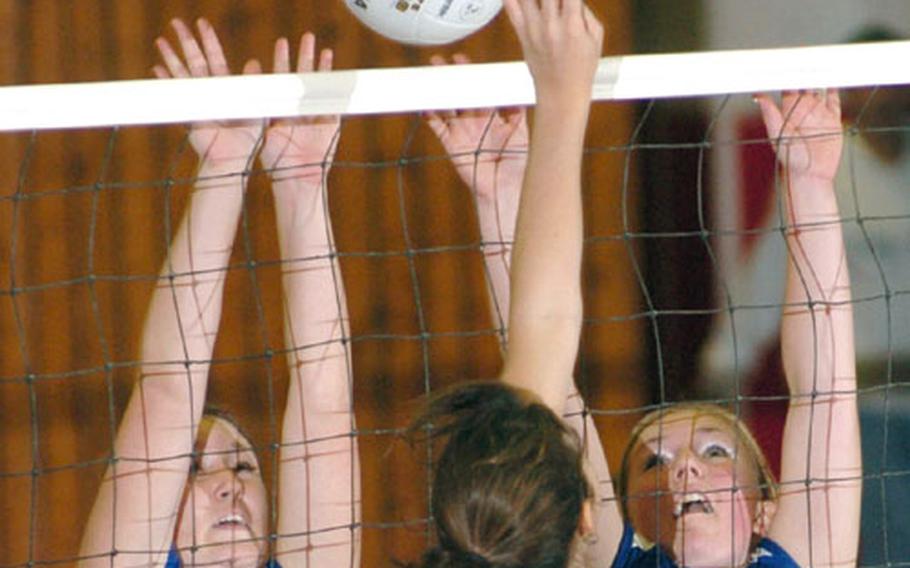 MIESAU, Germany &#8212; It wasn&#8217;t easy, but the pairings have been set for Saturday&#8217;s European volleyball finals in all four divisions.

The toughest one to determine was in Division I, where the round-robin to decide the finalists went down to the final match before Ramstein defeated defending champion Heidelberg in the third and final game.

Ramstein will play play Frankfurt International School, the No. 3 seed, which stunned top-seeded Heidelberg on Thursday, for the title at 1:30 p.m. Saturday

But Aviano (Division II) and Alconbury (Division IV) have the chance to repeat. The undfeated Saints, in what was expected to be a rebuilding year, will play Black Forest Academy in the 11:30 a.m. title game. Alconbury will take on Milan in its final at 1:30 p.m.

Particularly awesome were Aviano hitter Jessica Corder, who registered a season-high 22 kills in her showdown with All-Europe hitter Kasy&#8217;e Lalau of Patch. Corder benefited from 13 assists posted by Lindsay Jackson and what Cordova called her team&#8217;s &#8220;great ambience&#8221; on the court.

Egged on by eager mothers in the stands, the Saints sang and cheered all afternoon, even when faced with digging a couple of dozen bullets from the powerful Lalau.

Aviano had already played and defeated the Panthers three times this season. That was one fewer time than it had played Naples, its victim in Friday&#8217;s best-of-three quarterfinals. Aviano prevailed 25-21, 25-22.

Aviano&#8217;s last four points in Game 1 came via bad serves by Naples, and Aviano errors kept Naples in the second game until the Saints&#8217; energy kicked in.

For Patch, this tournament has been a redemption project. With Lalau on board, the Lady Panthers had been viewed as a preseason contender, but came into the Europeans seeded 10th of the 10 Division II teams.

Bitburg came into the tournement undefeated against Division II foes. The Lady Barons, however, stumbled Thursday against BFA and went into the quarters as a second-place pool finisher. And in a best-of-three against a team that can call on Lalau for the biggest hits in the division, there&#8217;s no room for error.

All championship matches will be best of five games, and will be played at Ramstein&#8217;s Southside gym.

Division I at Sembach