Europe sports 2006: Ramstein, Kaiserslautern's Smith were constants in a year of change 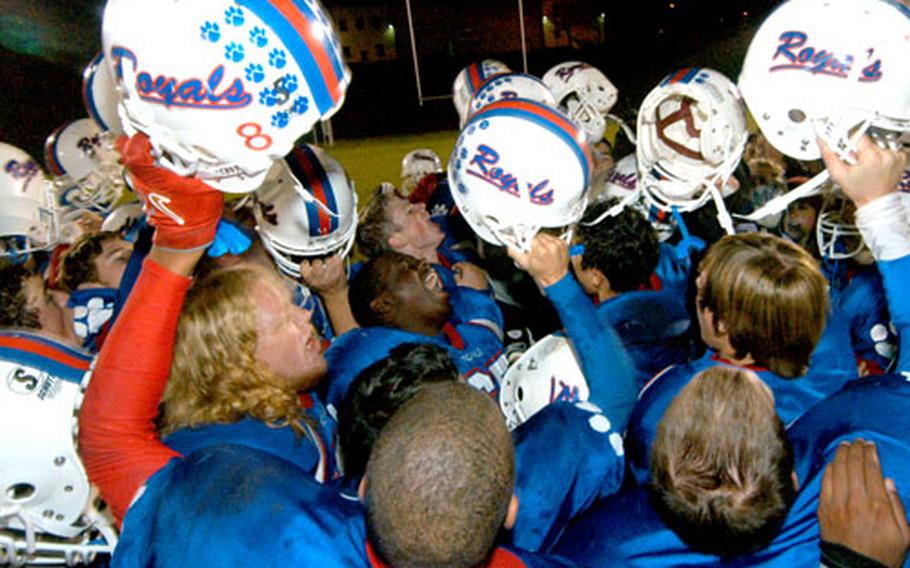 The Ramstein Royals celebrate after winning the DODDS-Europe Division I football title by beating Heidelberg 26-7 on Nov. 4 in Baumholder, Germany. Ramstein won seven team championships in 2006, the most by any DODDS-Europe school. (Michael Abrams / S&S)

The Ramstein Royals celebrate after winning the DODDS-Europe Division I football title by beating Heidelberg 26-7 on Nov. 4 in Baumholder, Germany. Ramstein won seven team championships in 2006, the most by any DODDS-Europe school. (Michael Abrams / S&S) Kaiserslautern’s Colleen Smith was the top individual winner for DODDS-Europe in 2006, earning three gold medals in the European track and field championships in May and another in cross country in October. (Ben Bloker / S&S)

Nobody knows better than DODDS-Europe athletic director Karen Seadore what the big story in high school sports was in 2006.

&#8220;This year was all about change, shifting schools around to make equitable divisions,&#8221; she said.

Here&#8217;s a month-by-month rundown of what DODDS athletes accomplished in 2006:

January: W&#252;rzburg, which earlier in the month fired a DODDS-Europe record team score of 1,408 out of a possible 1,500, won the European marksmanship championship Jan. 28.

On Feb. 18, Ramstein crowned four individual champions and ran off with the Division I wrestling crown, 226&#189;-155 over Wiesbaden.

One week later, W&#252;rzburg won its second straight Division I boys basketball crown, 62-58 over Wiesbaden. Kaiserslautern&#8217;s girls, paced by three first-team All-Europeans, routed Ramstein 45-20 to cap an unbeaten season and launch the school to the first of its four 2006 European titles.

March: Bamberg&#8217;s Marvin Gholston and Giessen&#8217;s C.J. Battle, each of whom led his team to a European title, were selected as the DODDS-Europe representatives on the U.S. team in the biennial Albert Schweitzer International Youth Basketball tournament in Mannheim, Germany.

April: Despite the presence of several players committed to NCAA Division I programs, the U.S. Schweitzer team posted its worst finish since 10 members of the 12-player team began coming over from the States in 1971. The Americans defeated Germany 106-82 April 22 in the seventh-place game.

May: The spring season closed May 20 with Heidelberg&#8217;s boys winning their ninth Division I soccer crown in 10 seasons with a 4-1 victory over Ramstein. Freshman Vince Crapeau scored three goals in the final, but the big winner in the boys field was Hohenfels, which downed four-time defending champion American Overseas School of Rome 4-0 in the title game. Anthony Marshall was chosen as MVP as his Tigers became the first DODDS-Europe school to win the Division III title in the 10 years of the event. AOSR had won eight times and Milan once.

In the girls games, Heidelberg dethroned Ramstein 5-4 in a Division I shootout, Patch won its second straight title in Division II, Sigonella claimed the Division III crown and Brussels triumphed in Division IV.

In softball, Ramstein won its fourth straight Division I crown in a rain-plagued tournament. Bitburg claimed the Division II title, and Baumholder edged Rota for the Division III crown.

Kaiserslautern&#8217;s Smith and her senior teammate Lynndsey Hyter were triple gold-medalists in the track and field championships May 20, where the K-town boys and girls won the D-I team titles.

Hanau&#8217;s boys and AFNORTH&#8217;s girls won the D-II team titles; the Hohenfels boys and Ansbach girls topped D-III, and the Brussels boys ruled D-IV. There was no girls D-IV champion.

June: Simmons, a Heidelberg senior, and Kyrie Bye-Nagel, a senior at Hanau, were voted athletes of the year by a panel of DODDS-Europe coaches. Each starred in three sports.

July: Lakenheath&#8217;s Billington qualified for the U.S. National Junior Triathlon team at a competition in the States.

August: Despite declining enrollment systemwide, Ansbach welcomed 400 players to a three-day, DODDs-Europe Football Camp led by volunteer coaches from across the continent.

September: DODDS-Europe opened its transformation-induced year of change with several schools shifting divisions. W&#252;rzburg dropped to D-II, and was replaced by Patch in D-I; Hanau dropped to D-III and Baumholder joined D-II.