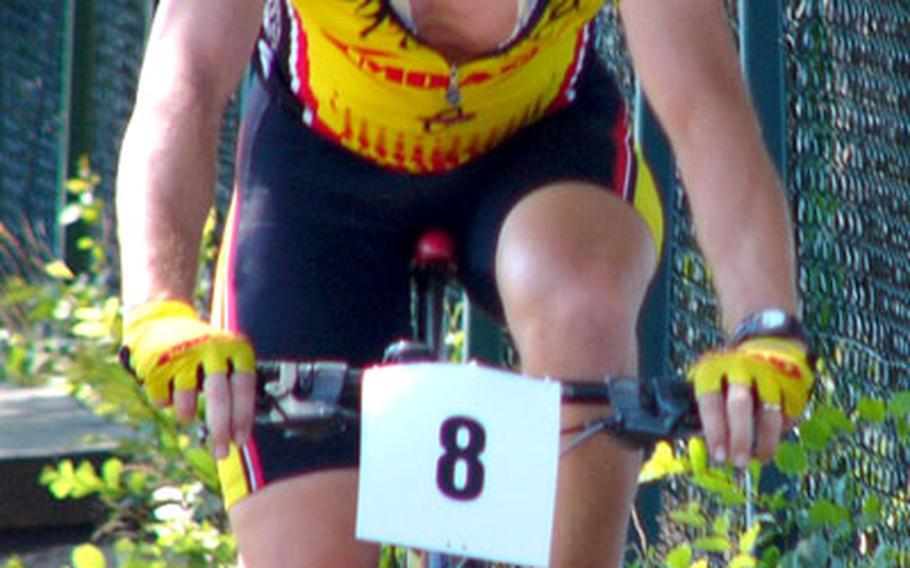 Nicole Bowman of Aviano Air Base, Italy, was chosen as USAFE’s 2006 female athlete of the year. Bowman was captain and starting point guard on the 2006 Air Force women’s basketball team. (Courtesy of Nathan Doza)

With military population levels and sports budgets in Europe drained by deployments and transformation, the outlook for military sports looked bleak as 2006 began.

But Jim Mattingly of Army-Europe sports and Steve Lowe of USAFE sports cobbled together schedules that satisfied almost everyone, working together to save everything except Final Four events in soccer and volleyball.

In all, there were 12 U.S. Forces-Europe events held in 2006. Ten were individual events: skiing, boxing, wrestling, road and mountain biking, tennis, golf, track and field, powerlifting and the Army 10-miler.

Individually, 2006&#8217;s military athletic stars were USAFE athletes of the year Lorenzo Peterson of Ramstein, a repeat choice who again qualified for the Air Force wrestling team, and Nicole Bowman of Aviano, who captained the 2006 Air Force women&#8217;s basketball team. And although the Army doesn&#8217;t formally name athletes of the year, the outstanding soldier-athlete of 2006 clearly was cyclist James Sharp of Hanau, who, in his mid-40s won every mountain bike and road race, 13 in all, he entered during the year.

Here are the sport-by-sport highlights of the local scene in 2006:

Other military mountain-bike champs were Rosendo Henriquez of Illisheim, Leslie Handy of Ramstein and Christine Gritzke of Vilseck.

Hockey: Bitburg claimed the USAFE title Feb. 10 with a 4-2 victory over the Baden Bruins of Heidelberg.

Powerlifiting: Robin Riley of Ramstein was the heavy-hitter in the U.S. Forces championships Feb. 11. Riley, who won the 110-kilogram (242.5 pounds) class, totaled 770 kilograms (1,697.56 pounds) for his squat, bench press and deadlifts in leading Ramstein to the men&#8217;s title.

Softball: Ramstein&#8217;s USAFE champion men made it four straight U.S. Forces titles for the Air Force with a 45-6 victory over Spangdahlem on a rainy Aug. 27 in Grafenw&#246;hr. In an all-Army women&#8217;s final, Heidelberg reversed the results of the previous week&#8217;s Army-Europe title game by downing SHAPE 15-8.

The winners don&#8217;t have long to rest on their laurels. The first U.S. Forces event of 2007, the wrestling championship, is Jan. 6-7 at Patch Barracks in Vaihingen, Germany.