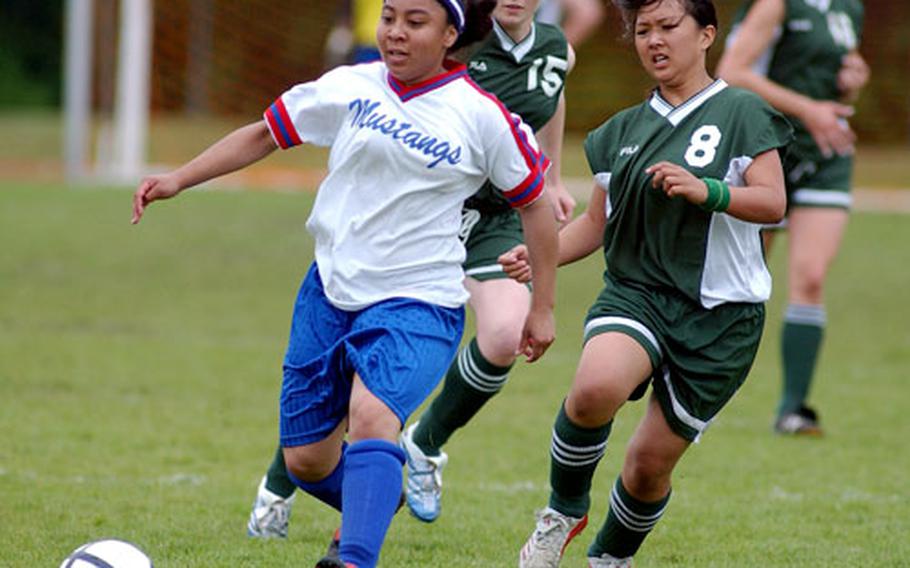 Menwith Hill&#39;s Nicole Romero gets past Alconbury&#39;s Brianna Smith, center, and Teresa Datar during an all-England Division IV semi-inal at the DODDS-Europe soccer championships in Ramstein on Thursday. Romero scored the first and third goal in the Mustangs&#39; 3-0 win. (Michael Abrams / S&S)

Menwith Hill&#39;s Nicole Romero gets past Alconbury&#39;s Brianna Smith, center, and Teresa Datar during an all-England Division IV semi-inal at the DODDS-Europe soccer championships in Ramstein on Thursday. Romero scored the first and third goal in the Mustangs&#39; 3-0 win. (Michael Abrams / S&S) 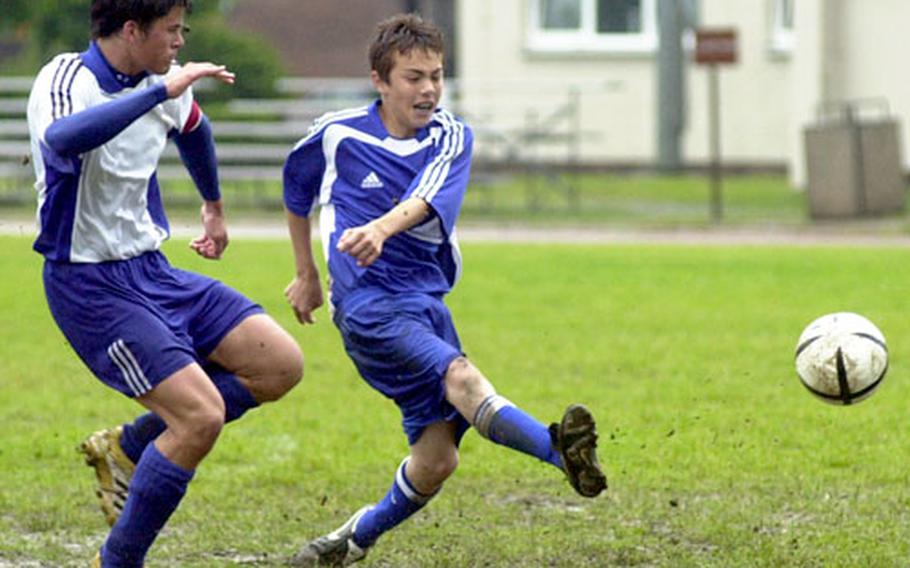 Rota&#39;s Keita Silk, right, gets a shot on goal ahead of Jimmy Pietras of Hohenfels in a wet Division III match in the DODDS-Europe soccer tournament in Kaiserslautern on Thursday. Rota came back from a 0-2 deficit to tie the game, before falling to Hohenfels 3-2. (Michael Abrams / S&S) 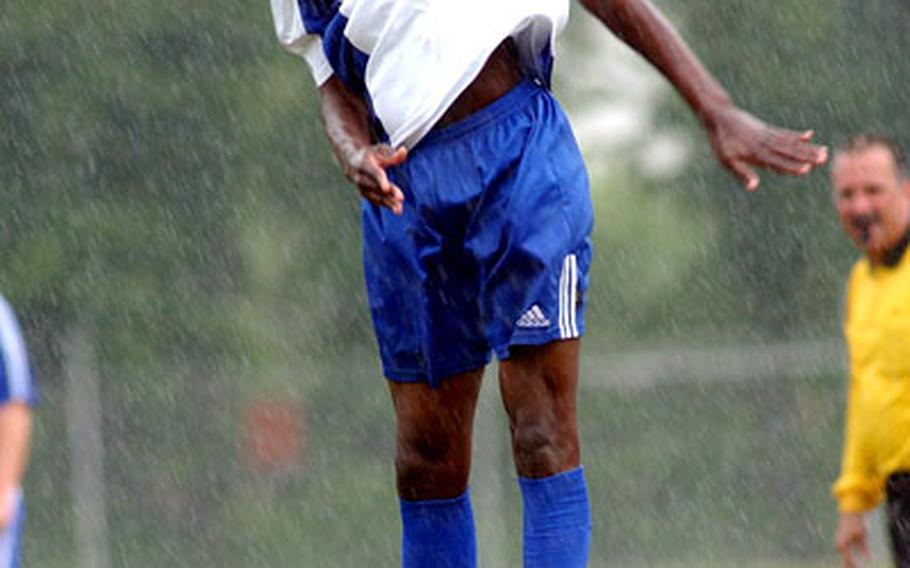 Anthony Marshall of Hohenfels heads the ball to a teammate in the Tigers&#39; 3-2 Division III win over Rota. (Michael Abrams / S&S) 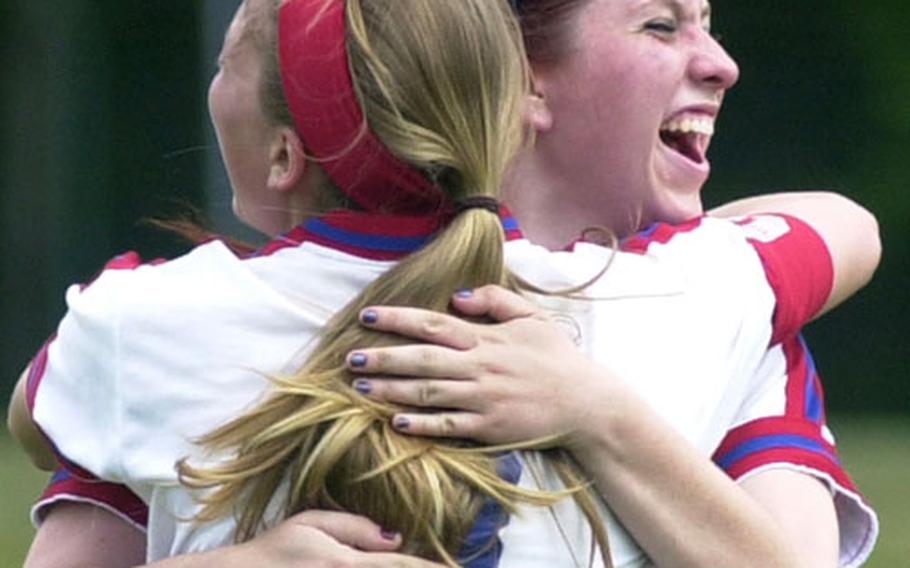 RAMSTEIN AIR BASE, Germany &#8212; Girls soccer teams from Heidelberg, Menwith Hill, Brussels and Ramstein advanced to the finals of the DODDS-Europe soccer tournament on Thursday. The Ramstein boys also advanced.

In the boys game, Ramstein&#8217;s Hunter Wilson back-heeled a corner kick into the net with six minutes left for the only score of the game.

Ryan Smith lofted the ball into the center of the box, where it bounced off several attackers and defenders before arriving at Wilson&#8217;s heel. Wilson, facing away from the goal when the ball arrived, flicked it backward past Lakenheath goalkeeper David McBride.

Lakenheath applied early pressure in the game, forcing keeper Kris Lusk to push a free kick over the bar and seeing Derek Dean&#8217;s dangerous header just clear the crossbar in the early going.

Lakenheath&#8217;s Chris Davis manufactured two good scoring chances on runs through the Ramstein defense in the second half, only to have one shot roll just wide of the post and the other roll directly into Lusk&#8217;s arms.

Ramstein, the defending D-1 champion, will play the winner of the late Heidelberg-Wiesbaden semifinal in Friday&#8217;s 6:30 p.m. title game at Ramstein High School.

In a late D-1 girls game, Heidelberg won on a penalty kick by Fallon Puppolo with about seven minutes to play.

In the girls Division IV tournament, Menwith Hill earned its third shot of the season at Brussels with its conquest of Alconbury in the semifinal game played at Ramstein.

Nicole Romero scored two goals and Larissa Gimmy the other as the Mustangs avenged a 2-0 road loss to Alconbury last Saturday.

Menwith Hill and Brussels play for the title at 12:30 p.m. Friday at Ramstein High School. Menwith Hill lost to Brussels 3-1 at home on March 25, but tied the Lady Brigands 3-3 on the road April 29.

The girls Division I championship game is scheduled for 4:30 p.m. Friday at Ramstein, following the conclusion of the boys Division IV game between two teams still to be decided.

Play resumes at 9 a.m. Friday and Saturday in both divisions.

DODDS-Europe soccer championshipsRAMSTEIN AIR BASE, Germany &#8212; Results from the DODDS-Europe Divisions I, II, III and IV soccer tournaments which end Saturday. Preliminary round games are 60 minutes. Semifinals and finals will be 80 minutes:

Semifinals, 1:45 and 3 p.m. at Nanzdietschweiler

Semifinals, 5:15 and 7 p.m. at Nanzdietschweiler