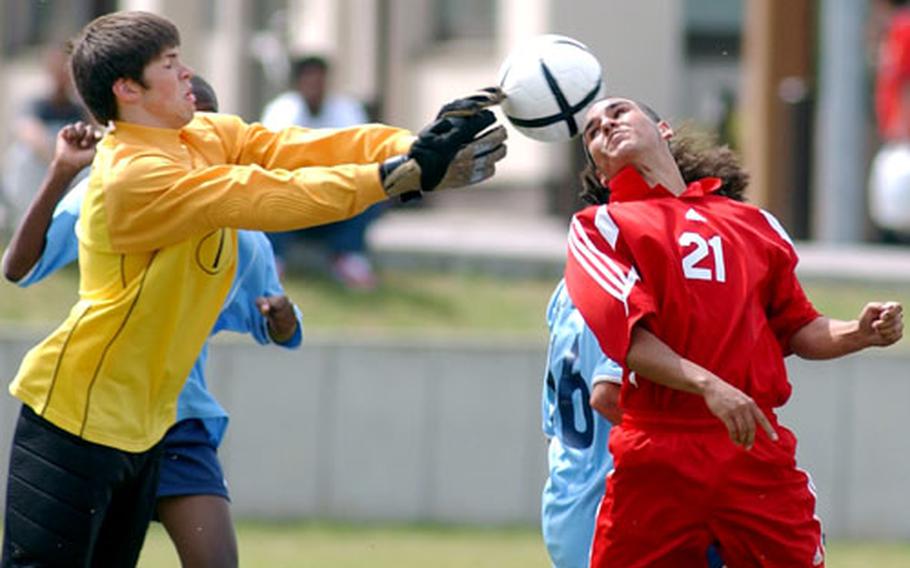 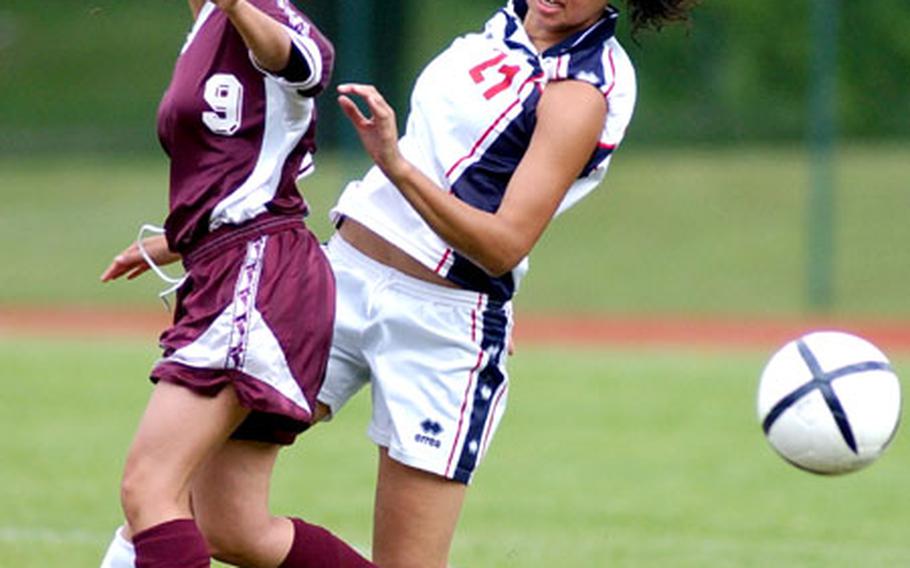 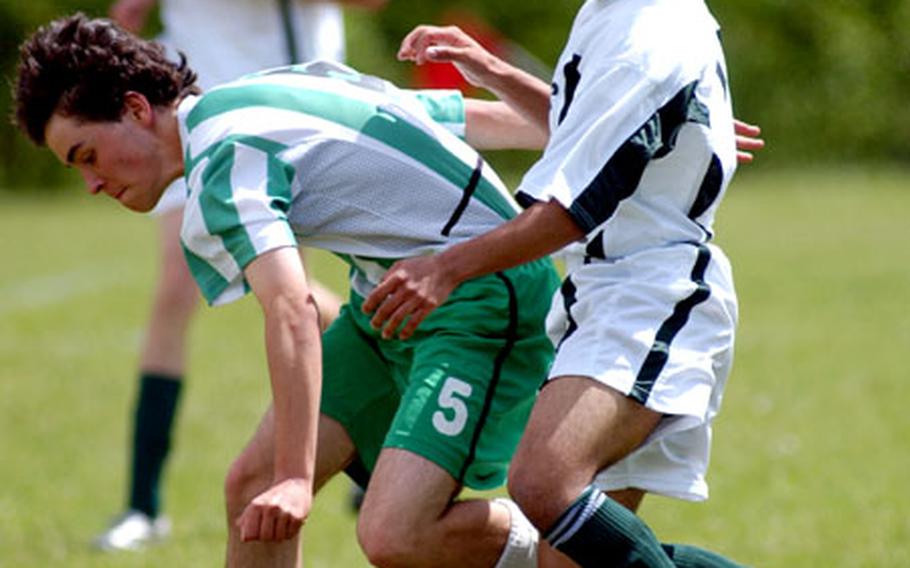 Ankara’s Christopher Wilson, left, and Alconbury’s Dominick Sherenco battle for the ball in a match that ended in a 1-1 tie in the DODDS-Europe Division IV soccer tournament on Wednesday in Kaiserslautern, Germany. (Michael Abrams / S&S)

RAMSTEIN AIR BASE, Germany &#8212; Wiesbaden&#8217;s boys and Vilseck&#8217;s girls pulled off the biggest surprises Wednesday as play began in all four divisions of the DODDS-Europe soccer tournament with 61 games on seven fields in the Kaiserslautern Military Community.

Wiesbaden&#8217;s fifth-seeded boys handed top-seeded but scholastically depleted International School of Brussels its first loss of the season, 1-0, and Vilseck&#8217;s ninth-seeded girls held Italy champion and second-seeded Aviano to its first non-winning outcome of the season with a 1-1 tie.

Wiesbaden&#8217;s victory in the Division I tournament turned the tables on an ISB team that downed it 5-0 in March. This time, ISB played without four senior starters, who remained in Belgium to take international baccalaureate exams.

Sabrina Gilg scored a first-half goal for Vilseck as it tied Aviano in the Division II tournament. Later in the day, Vilseck lost 1-0 to third-seeded Hanau on a rebound goal in front of the Vilseck net.

Tamaria Hollis of Vilseck saw the two games as vindication after an 0-5-1 season.

But Hanau&#8217;s Kate Maccagnan, whose first-half goal made the difference in its victory, said she was not surprised by Vilseck&#8217;s play.

Everybody except Patch&#8217;s girls, that is. The defending Division II champions shut out Black Forest Academy 3-0 and SHAPE 1-0 to open their title defense.

In other Division I boys games, Heidelberg, which had won eight straight European Division I crowns before being supplanted last year by Ramstein, gained a measure of revenge by downing the third-seeded Royals 1-0. The goal came on a penalty kick awarded the second-seeded Lions in the game&#8217;s waning seconds.

In Division I girls play, unbeaten Heidelberg rolled over Lakenheath 4-0, and defending champion Ramstein routed W&#252;rzburg 7-0 after being held to a scoreless tie against Kaiserslautern.

In the Division III event, three-time defending champion American Overseas School of Rome opened its bid for its fourth straight title with a 3-0 whitewash of Baumholder, the same score by which second-seeded Hohenfels downed Ansbach.

There were no girls Division III games on Wednesday.

Divisions I and IV championship games are Friday, with the Division II and Division III finals on Saturday.

DODDS-Europe soccer championshipsRAMSTEIN AIR BASE, Germany &#8212; Early results Wednesday in the DODDS-Europe Divisions I, II, III and IV soccer tournaments, which end Saturday. Preliminary round games are 60 minutes. Semifinals and finals will be 80 minutes: