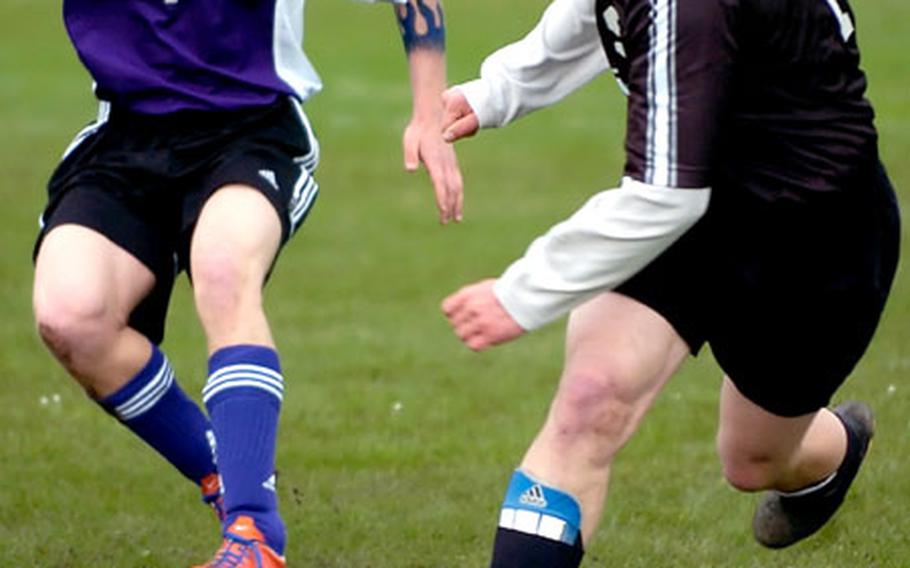 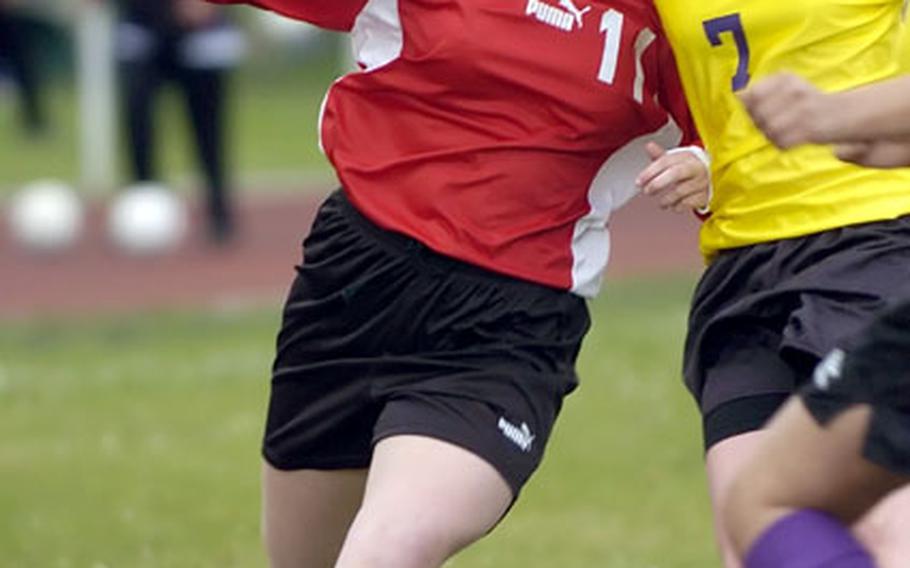 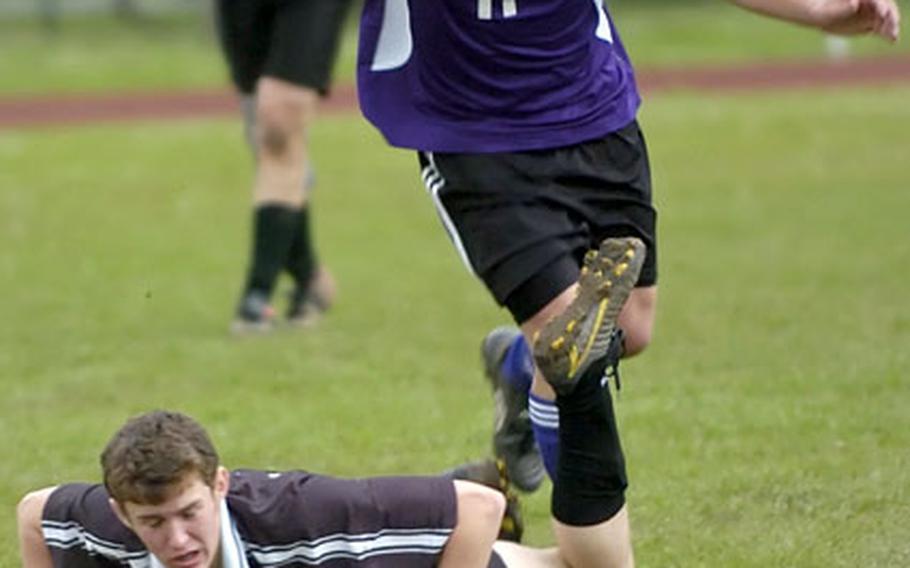 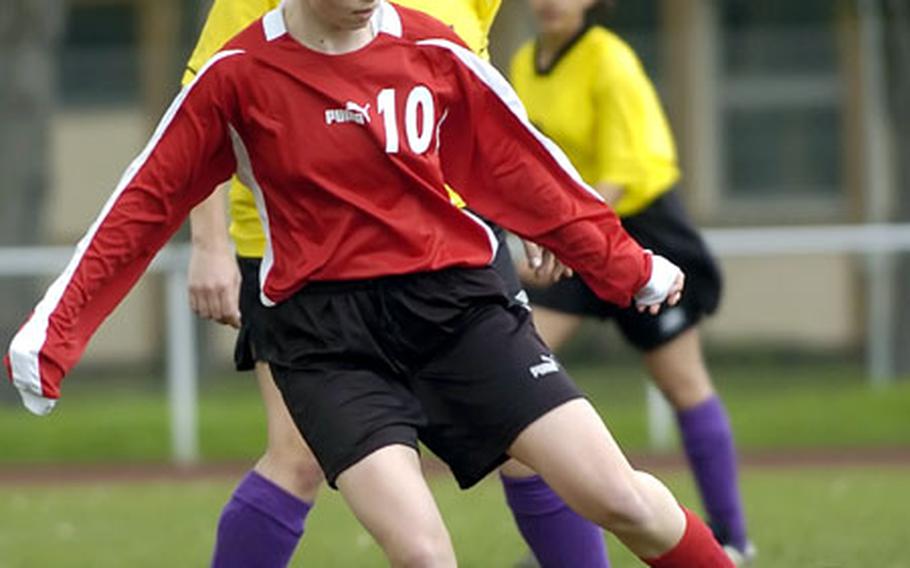 (Game summaries at end of story)

Skaugen, a Norwegian who drew double-coverage all game, gave the Lions a 1-0 halftime lead on an unassisted goal, then scored three goals, off assists from fellow returning All-European Mike Kincaid, in the second half.

&#8220;We made an adjustment at halftime,&#8221; AFNORTH coach Greg Blankenship said, &#8220;and you could see the light click on with our new midfielders (Chris Eden and Jacob Spraggins).

Blankenship said his team seemed out of synch in the first 40 minutes, firing 10 shots wide of the net before halftime. After intermission, Eden and Spraggins, who each scored a goal, were fully meshed into the system.

In other soccer games of note Thursday:

Kennedy bails out Patch boys: At Mannheim, Germany, Patch&#8217;s David Kennedy, a senior playing his first game in goal, scrambled to punch a dangerous shot over the bar and made two point-blank saves in the late going to preserve a scoreless tie.

The Patch defense, which started four freshmen, kept most of the play in Mannheim&#8217;s (0-2) end of the field throughout &#8212; Patch keeper Meredith Beatty was called on for just two saves.

Ramstein girls stay perfect: At Ramstein, Germany, Dorothy Stern scored on a direct free kick, and returning All-Europe midfielder Mari Shakir scored off a pass from Sarah Moore to lift Ramstein (3-0, 2-0 Div. I) to a 2-0 victory in the rain over visiting Kaiserslautern.

Ramstein boys rebound: Tommy Appel-Schumacher had two goals and three assists as the Royals rebounded from last week&#8217;s loss to Heidelberg with a 7-0 home victory over Kaiserslautern.

Chris Adams helped lead the defense for BFA, which was playing its opener.

Hanau girls tie champs: In another game at Kandern, Hanau (1-0-1) tied defending Division II champion BFA 1-1 on a goal from Lisa Fontanez. It was the first game of the season for BFA.

The Lady Bucs (0-2), started the game with only nine players, and lost one five minutes into the game. Giessen improved to 1-2-1.

Noteworthy&#8212;Kaiserslautern (0-2, 0-1 in D-I) got what Ramstein coach Dan Nukala called &#8220;solid games&#8221; from Josh Warren and Josh Bunch, helping keep the Red Raiders&#8217; deficit to 1-0 until late in the first half. Kaiserslautern next plays at home April 29 against W&#252;rzburg. For Ramstein (2-1, 1-1), which next plays at International School of Brussels on April 23, sweeper Cole Maxey and defenders Chris Lee and Adam Rasmussen spearheaded the shutout, Nukala said.

Noteworthy&#8212;W&#252;rzburg coach Mike Whitescarver was impressed by the play of his defenders Jason Fleck and Tim Smith. Wiesbaden&#8217;s Ben Arcila cited the play of Adam Swingle, Collin Lines and Brandon Foster as his team evened its record at 1-1-1 and improved to 1-0-1 in D-I. The Warriors next play at Lakenheath on April 23. W&#252;rzburg is 0-2 overall and in D-I. The Wolves next play at International School of Brussels on April 16.

Noteworthy&#8212;Game was season-opener for BFA, which got a strong defensive effort in heavy rain and mud from Chris Adams, according to coach Chris Greathouse. Hanau&#8217;s Panthers (0-2 overall and in D-II) were missing their starting sweeper and goalkeeper, according to coach Travis Schupp. Next up for defending D-II champion BFA is a game at Vilseck on April 16. Hanau next hosts Bitburg on April 23.

Noteworthy&#8212;New midfield clicked after halftime, according to coach Greg Blankenship, as newcomers Spraggins and Eden settled in AFNORTH&#8217;s season-opener. Blankenship said his defenders Rich Wilson and Stian Standahl dominated the Bitburg attack and allowed just two shots on goal. Next up for AFNORTH is a game at perennial power SHAPE on April 16; the Lions travel to Mannheim the following weekend for games against Mannheim on Friday, April 22, and defending European D-II champion BFA on Saturday, April 23. Bitburg (0-1-1 overall and in D-II) next plays at Vilseck on April 22.

Noteworthy&#8212;London Central (2-0 overall, 1-0 in III-North) had 13 shots on goal, according to coach Joey Emerick. London Central next hosts Brussels for a III-North game April 23. Alconbury (0-3, 0-1) next plays Menwith Hill at home on April 23 in a nonconference game.

Noteworthy&#8212;Baumholder defender Bayne Tyrek helped Lampe hold score down in face of 15-shot Giessen attack, according to Giessen coach Robert Acaba. The Bucs (0-2 overall, 0-1 in III-South) are next scheduled for a III-South game at Bamberg on April 23. Acaba cited the defensive excellence of his players Brian Heller, Ethan Toombs, K.C. Brown and Brian Cooke. Griffins improved their record to 3-1-1 overall and 1-0 in III-South and next play a conference game at Hohenfels on April 23.

Noteworthy&#8212;Hohenfels coach Shawn Rodman said his defense, led by Jimmy Pietras, played well as Tigers improved to 3-0 overall and 1-0 in III-South. Tigers next host Giessen for on April 23. Ansbach (0-2 overall and 0-1 in III-South) keeper Lougheran ran his save total to 36 in just two games. It next plays at Bamberg on April 16.

Noteworthy&#8212;Ramstein coach Ricardo Boitrago praised the midfield play of K-town&#8217;s Joy Hrushka and that of his own mids, Rebecca Tenuta and Maria Shakir. He also cited the defensive performance of his own Katie Norris. Next up for Ramstein (3-0 overall and 2-0 in D-I) is a league game April 23 at International School of Burssels. K-town (0-2, 0-1) is idle until it hosts W&#252;rzburg in a league game on April 29.

Noteworthy&#8212;W&#252;rzburg coach Debby Greenberg praised the performance of her defense &#8212; sweeper Hali Butler and defenders Sara Greenberg and freshman Tory McKernan &#8212; in the face of physical Wiesbaden attack and rain and hail storm. W&#252;rzburg will take a 0-0-2 overall and D-I record into its next game, at ISB on April 16. Wiesbaden (0-1-2, 0-0-2) next plays at Lakenheath on April 23.

Noteworthy&#8212;Game was season-opener for defending European D-II champion BFA. It next plays at Vilseck on April 16. Hanau is 1-0-1 overall and in D-II and next plays at home against Bitburg on April 23.

Noteworthy&#8212;AFNORTH coach Christina Vile credited Tauree Blankenship with anchoring her team&#8217;s defense and Katrina Smith with directing the offense. She also was impressed with the play of Bitburg&#8217;s Dani Goldfein. It was the opening game of the season for AFNORTH, which next plays at SHAPE on April 16. Bitburg (0-2 overall and in D-II) next plays at Vilseck on April 22.

Noteworthy&#8212;Baumolder, which began game with just 9 players, lost one of them to injury 5 minutes into the game and finished game with just 8. The Lady Bucs (0-2 overall, 0-1 in III-South) next play at Bamberg on April 23. Giessen is 1-2-1 overall and 1-0 in III-South going into its next game, April 23 at Hohenfels. Giessen coach Edwina Smith praised the work of her defense, led by Kyle Klenk, Heather Martinez and Jennnifer Lowry, for allowing no shots on goal.

Noteworthy&#8212;Ansbach coach Bruce Satterlund credited Alycia Higgins, Keke Johnson and Alison Hazen for controlling the center throughout the game and helping his defense, led by Kate Alegado, limit Hohenfels to just one shot on goal. Ansbach (2-0 overall and 1-0 in III-South) next plays at Bamberg on April 16; Hohenfels (0-2-1) next plays at home against Giessen on April 23.

Patch&#8217;s Kylie Marchant knocks down the ball against Mannheim on Thursday in Mannheim, Germany. Marchant scored in Patch&#8217;s 2-0 win.