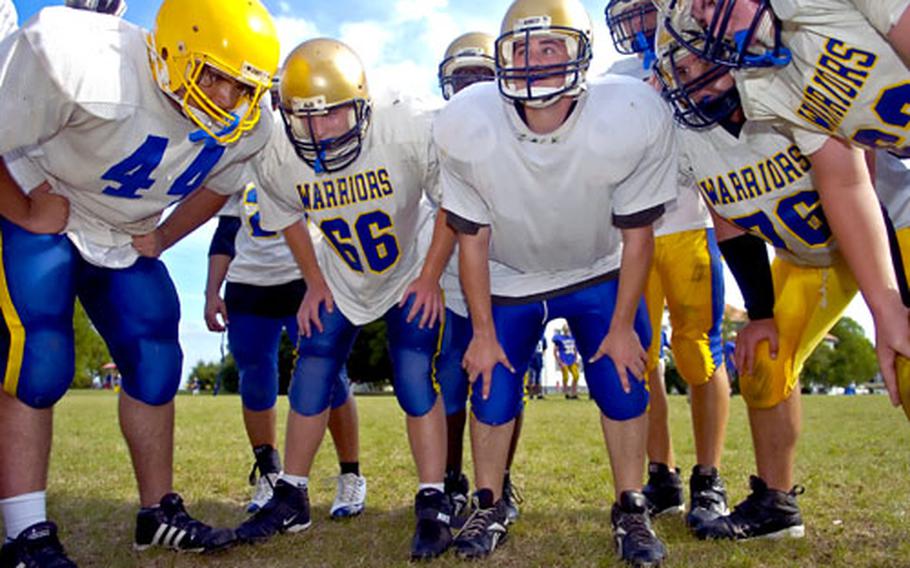 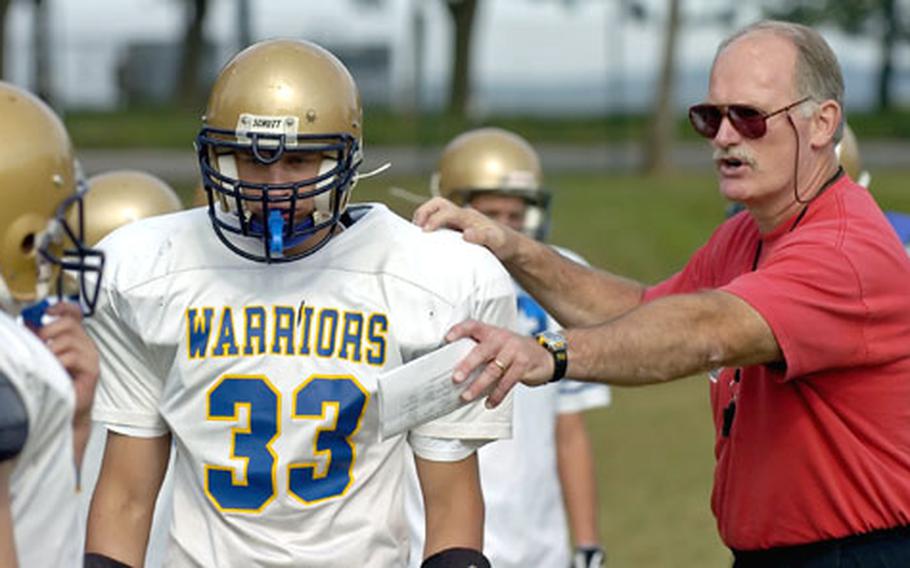 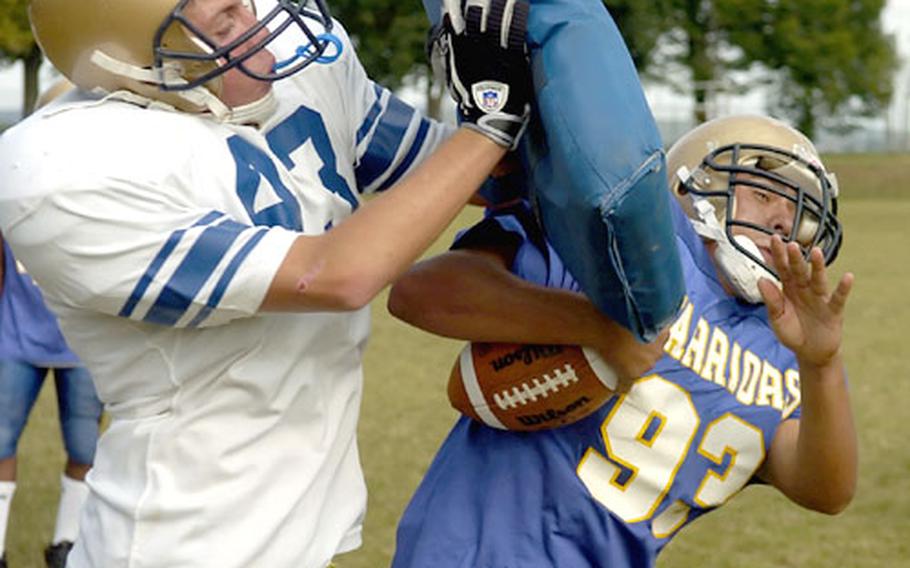 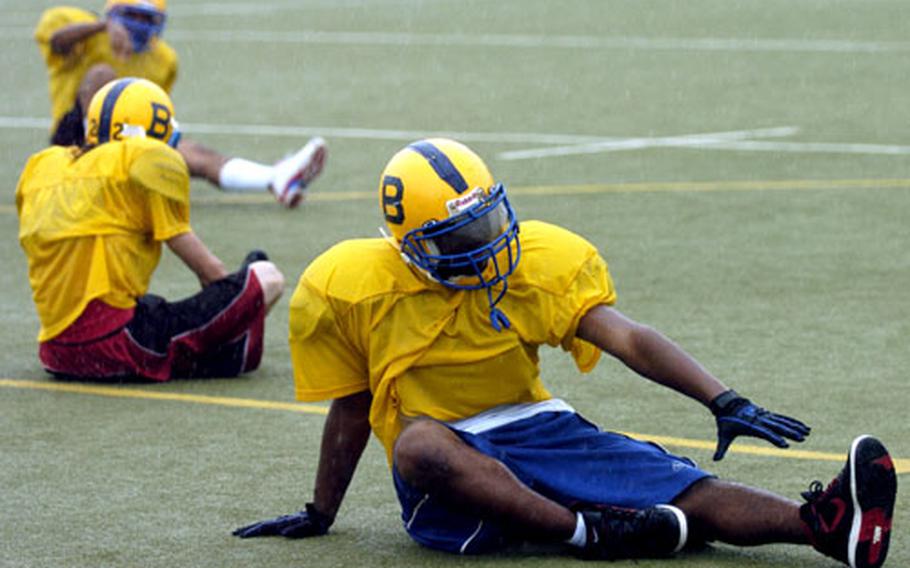 Bamberg high school football players do calisthenics in the pouring rain during practice in Bamberg, Germany, on Monday. The Bamberg team has been hit especially hard by deployments and had only 18 players for their squad as of Monday. (Raymond T. Conway / S&S) 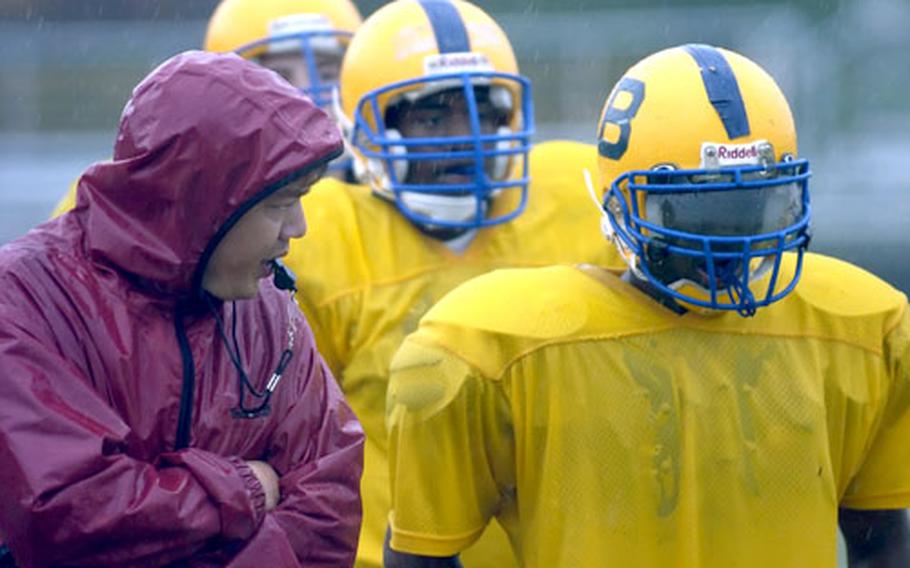 After a summer spent fretting over declining enrollments, high school football coaches in Europe kick off the 2005 season Saturday knowing that, for the present at least, they&#8217;ve beaten the numbers.

Archie, whose Wolves draw on a student population of 446, smallest in Division I, had 35 hopefuls turn out.

Davis said he was expecting a change of pace at Bamberg, just not so much of one.

Enrollment turned out to be 125. After some recruiting by Davis, 18 turned out for football.

Even the system&#8217;s smallest school survived. Menwith Hill, 92 high-schoolers strong, has 25 players out for football, according to coach Pete Resnick.

Davis&#8217; former boss at Kinnick, Robert Stovall, also has 25 on his first Rota team. His problem is compounded by isolation.

With enrollments at acceptable limits, the football community can concentrate on more important numbers. The biggest comes from a small-schools power.

Division IIIAnsbach, the three-time defending European Division III champion, is on a 24-game winning streak. If the Cougars can win their first two games at home, they&#8217;ll play at Vicenza on Oct. 1 with a chance to set a European record of 27 straight victories.

The Cougars, who graduated seven All-Europeans among their 15 seniors, will run at the mark with an entirely new cast.

Among those in III-South hoping to deny the Cougars is Hohenfels, which welcomes back three-year starter Jason Parks, quarterback MVP at last month&#8217;s DODDS-Europe football camp.

Also vying in III-South are Bamberg, with T&#8217;Andre Stuckey the tailback in Davis&#8217; new I formation; Vicenza, the largest D-III school in the system; Sigonella, where Mike Chisari takes over the coaching reins; and Giessen.

International School of Brussels in the North and Hanau in the South each boast a 2004 All-European running back &#8212; Phillip Lipman at ISB and Malcolm Lane at Hanau. George called Lane the best athlete at his 396-player football camp

Both teams will challenge for the European title, according to Kappenman and George, as will Naples.

John Jackson&#8217;s Patch Panthers, with returning All-Europe quarterback J.D. Lindsay, a 6-4, 215-pound load operating behind an intact offensive line and bolstered by running back Daniel Kennedy, is also in the mix.

Division IDepartures hit every school hard enough that in the words of Ramstein&#8217;s Glenn Porter, there should be &#8220;even competition&#8221; this season.

Defending champion Wiesbaden, which graduated slashing running back Paul Fry and hammer fullback Danny Villaneuva among its 15 seniors, is in transition this year, according to coach Steve Jewell.

Evan Watson and Chase Socha will anchor the line, Jewell said, while Chad Abrahamson is the lone defensive starter back. Newcomers Isaac Horton, a linebacker, and Ricky Rivers, a tackle, join him. Sophomore Ron Peebles and freshman Julian James will split time at tailback.

Tom Burriss, an assistant the last two seasons at Kaiserslautern, takes over from Clinton Robinson. He&#8217;ll have All-Europe lineman Madison Hayes and basketball star Quintin Strawder at quarterback to work with.

Newcomers Cameron Hoffman at quarterback, Lorenzo Zesati at wide receiver, Cameron Carroll on the offensive line and Joseph Haynes at linebacker and returnee Taureen Powell are expected to bolster W&#252;rzburg.

New coach Dan Achenbach faces a rebuilding job for his first task at Lakenheath. He has the materials in 375-pound lineman Kevin Mencey and near-300 pounder Jason Hacker. Wesley Klenic, a transfer from Japan, takes over at quarterback.