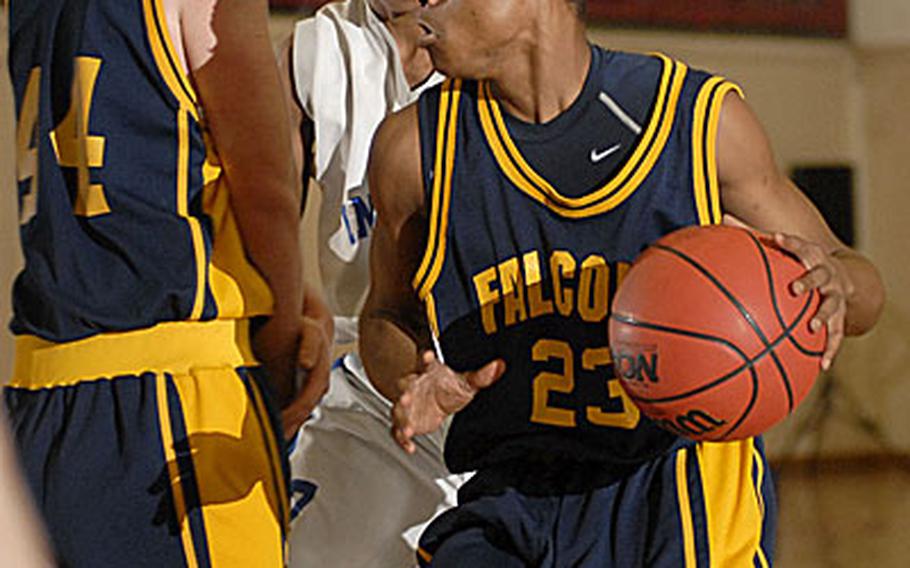 Brandon Harris, a sophomore from Lajes High School, drives past a pick during the first period of a Division IV round-robin game against Incirlik High School in the DODDS-Europe high school basketball championships tournament at Mannheim on Thursday. Incirlik beat Lajes 34–22 to advance to the semifinals. (Ben Bloker / S&S)

Brandon Harris, a sophomore from Lajes High School, drives past a pick during the first period of a Division IV round-robin game against Incirlik High School in the DODDS-Europe high school basketball championships tournament at Mannheim on Thursday. Incirlik beat Lajes 34–22 to advance to the semifinals. (Ben Bloker / S&S) 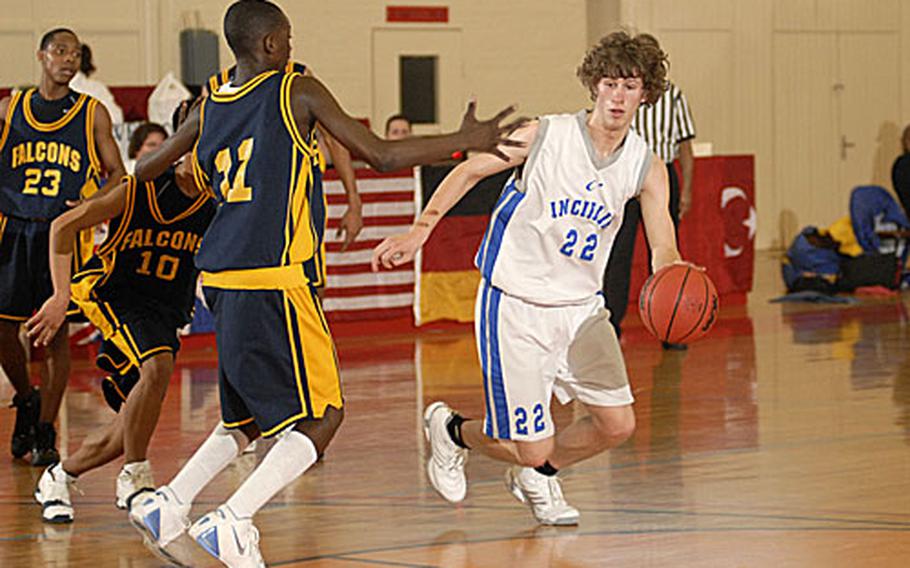 Kris Roeske, a senior from Incirlik High School, drives toward the basket during a Division IV round-robin game against Lajes High School on Thursday. Incirlik won to advance to the semifinals of the DODDS-Europe Division IV basketball championship tournament. Roeske led Incirlik in scoring with 15 points. (Ben Bloker / S&S) 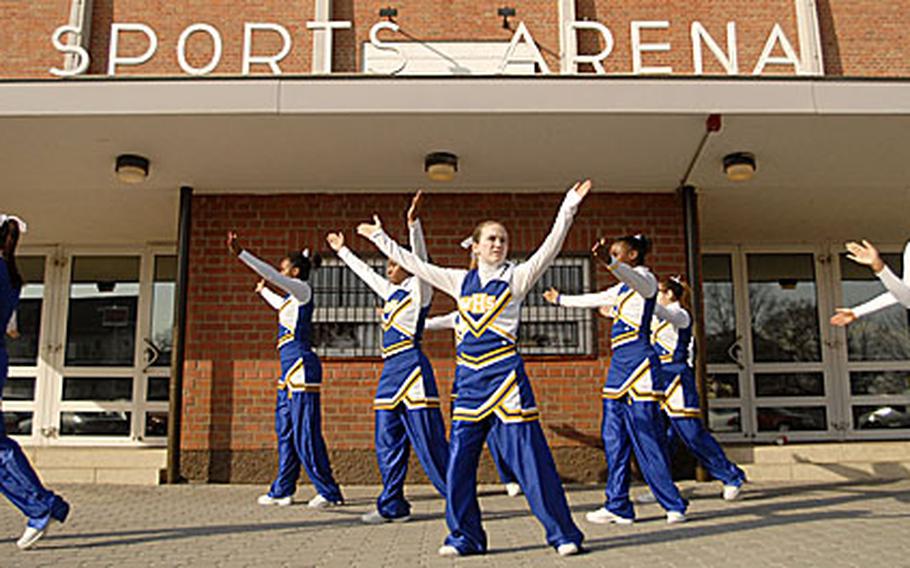 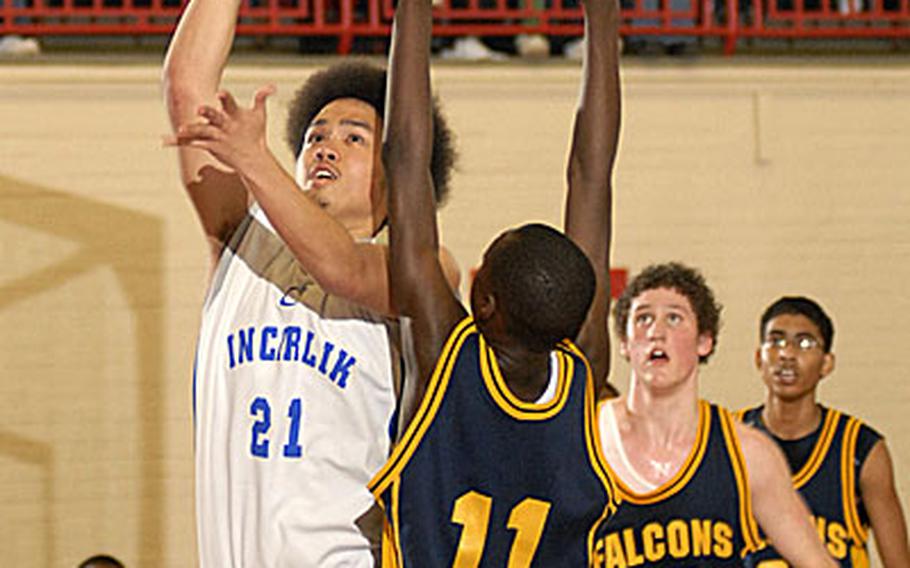 Josh Callaway, a sophomore from Incirlik High School, puts up a shot during the fourth period of a 34-22 win over Lajes High School on Thursday. The victory enabled Incirlik to advance to the semifinals of the DODDS-Europe Division IV high school basketball championships. (Ben Bloker / S&S) 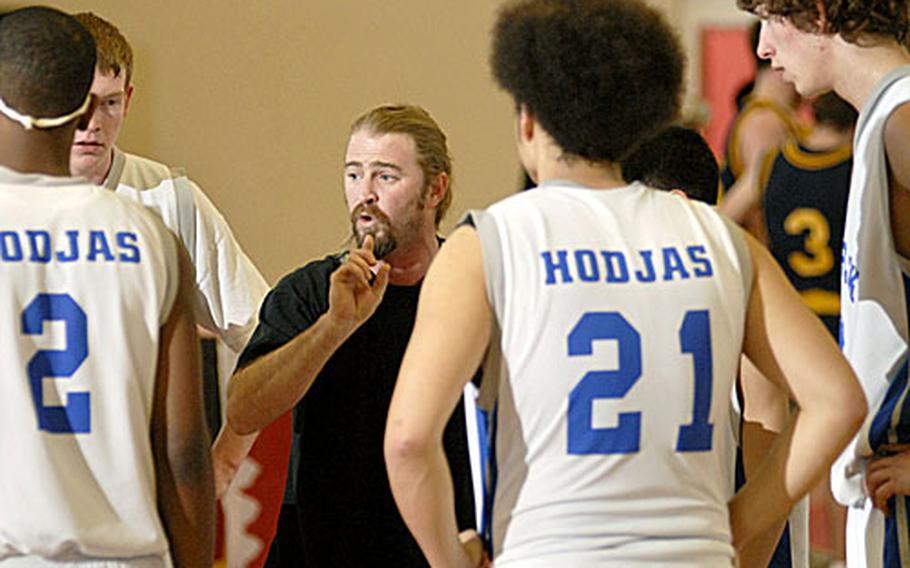 MANNHEIM, Germany &#8212; Menwith Hill advanced to the finals of the European Division IV basketball tournament with a 45-29 victory over Alconbury Thursday evening.

The win was the latest in a series of victories that have the Mustangs feeling positive about themselves.

&#8220;At the beginning of the year, we were kind of uptight, but as the season went along we got more confident,&#8221; Menwith Hill forward Le&#8217;Shawn Adams said before the semifinal game.

And with good reason: The Mustangs had just crushed Ankara 45-5 to enter the game on a roll.

The victory over Alconbury &#8212; the third this year over the Mustangs&#8217; fellow U.K. school &#8212; put Menwith Hill in the championship game against Bamberg.

The Barons, who won the D-III title last year and are the top seed in D-IV this year, defeated Incirlik 77-47 in the other semifinal game. Tip-off for the final is 4:15 p.m. Friday.

Ramstein 43, Patch 31: The second-seeded Royals, already assured a berth in Thursday night&#8217;s D-I semifinals against Kaiserslautern, rested their starters for three-quarters of this victory over sixth-seeded Patch, winless in three tries here.

&#8220;It was a lot of fun letting the other guys play and getting to cheer for them,&#8221; said starter Scott Sublousky, who scored eight points in his seven minutes of playing time. &#8220;They hustle all the time and deserve a chance to play.&#8221;

The Ramstein-Kaiserslautern winner will take on the victor of Thursday evening&#8217;s Heidelberg-Wiesbaden semifinal in Friday&#8217;s 7:45 p.m. title game at the Benjamin Franklin Village Sports Arena.

Sublousky, however, had his eyes set on Kaiserslautern.

Incirlik 34, Lajes 22: Kris Roeske scored 15 points and Brandon Combs added 9 for the Hodjas as Incirlik qualified for its semifinal game against Bamberg.

Division II continued its pool play, while Division III began its tournament with a full slate of games that resumes at 8 a.m. Friday. Both conclude with championship games on Saturday.

Tournament scoreboardMANNHEIM, Germany &#8212; Results from the 2007 DODDS-Europe high school boys basketball championships, which end Friday for Divisions I and IV and Saturday for Divisions II and III (Pool-play games consist of 7-minute quarters; periods in semifinals and finals are 8 minutes):