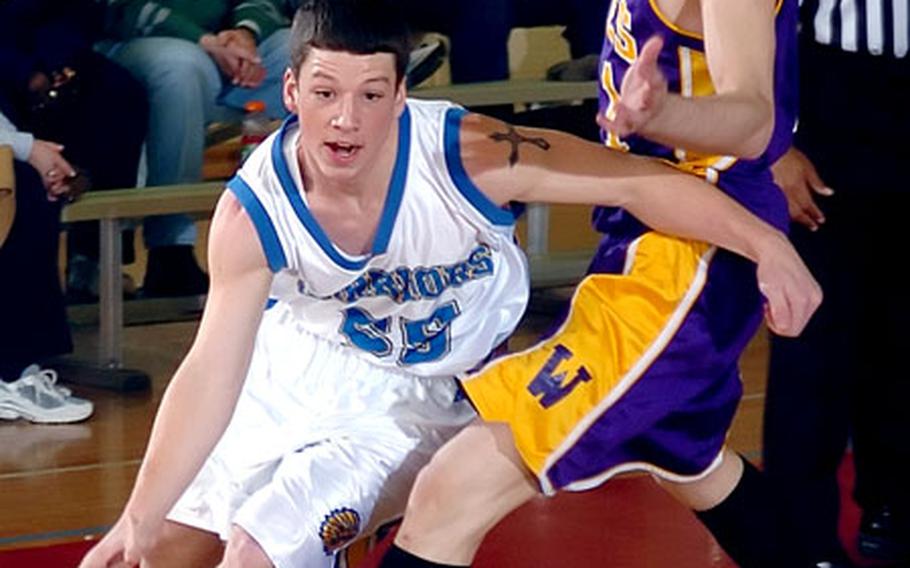 Würzburg&#39;s Jonathan Ortiz sails through the lane for a basket against Wiesbaden. (Raymond T. Conway / S&S)

MANNHEIM, Germany &#8212; Fittingly for the hard-working W&#252;rzburg boys basketball team, it took an extra period for them to subdue Wiesbaden 62-58 and wrap up their second straight European Division I championship.

Wiesbaden managed to stay with the all-pressure, all-the-time Wolves for the first four quarters, evading defeat in regulation when W&#252;rzburg&#8217;s Donald Bryant missed the front end of a one-and-one with 9.2 seconds to play and his team ahead 55-53. Wiesbaden&#8217;s Anthony Smith rebounded, pushed an outlet pass down the left sideline to Bryce Lee, who fed Shannon McCray for the game-tying layup as the buzzer sounded.

That free throw was the only one Bryant missed all evening. He was 7-for-7 previously, and finished with 16 points.

Free throws, which had carried the Wolves up until the end of regulation, loomed large again in overtime. Jamell Johnson converted a one-and-one and sank a field goal in the first 1:34 of OT to get the Wolves the four-point lead they kept to the end.

They won this one. The Wolves went 21-for-29 from the line; Wiesbaden 2-for-3. Wiesbaden made so few trips to the line because W&#252;rzburg, for all of its incessant and intense pressure, never put the Warriors into the bonus. The Wolves, on the other hand, were in the bonus more than four minutes in each half.

Taulelei, despite missing four straight tries on the double bonus in overtime, was 9-for-14 from the line and scored 17 points.

Taulelei&#8217;s 8-for-9 shooting from the line in regulation was critical in helping W&#252;rzburg endure a barrage of three-pointers in the first three quarters. The Warriors, led by tournament MVP David Bradford&#8217;s four and all-tournament player Jay Parker&#8217;s three, sank 10 of 18 from behind the arc. But they were 0-for-4 on threes in the fourth quarter and overtime.

Still, the three-pointers had the Wolves worried. They lost their regular-season game, and the top seed, the week before in Wiesbaden on a buzzer-beating three.

Bradford led all scorers with 19 points. Parker finished with 13 after a 10-point opening half that ended tied at 33. The game was tied six times thereafter, and Wiesbaden led by as many as five in the second half before the Wolves scrambled back.