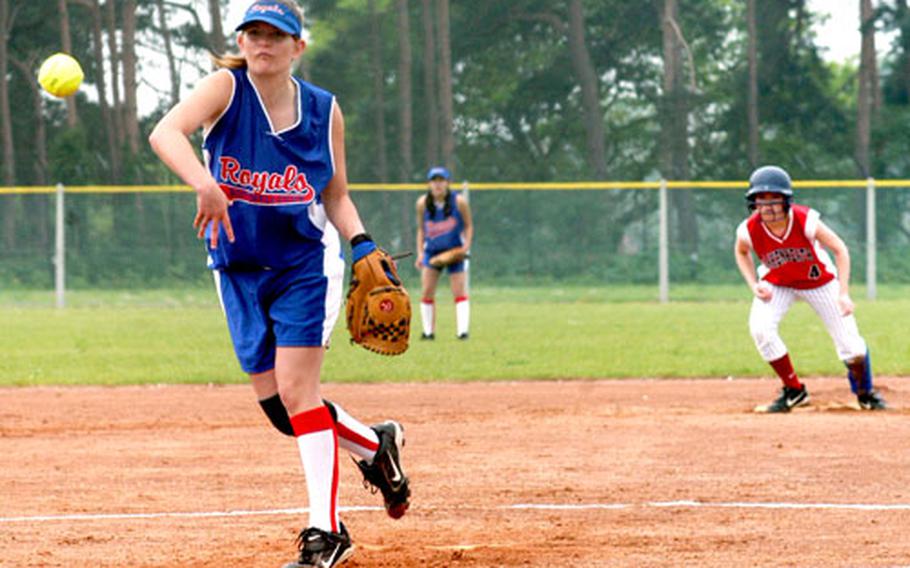 Ramstein sophomore Kayla Haven releases a pitch during the first game of a doubleheader against Lakenheath at RAF Lakenheath on Saturday. Lakenheath beat Ramstein twice, 12-4 and 9-2, to claim the Division I regular-season title. (Sean Kimmons / S&S)

Ramstein sophomore Kayla Haven releases a pitch during the first game of a doubleheader against Lakenheath at RAF Lakenheath on Saturday. Lakenheath beat Ramstein twice, 12-4 and 9-2, to claim the Division I regular-season title. (Sean Kimmons / S&S) Lakenheath freshman Amy Wagner focuses on the ball during the first game of a doubleheader against Ramstein at RAF Lakenheath on Saturday. (Sean Kimmons / S&S)

Brynn Lipor pitched Lakenheath to a doubleheader sweep of visiting Ramstein and the Division I regular-season softball championship Saturday.

Lipor struck out seven Lady Royals in the opening game, a 12-4 victory, and three in the nightcap, which Lakenheath won 9-2. She gave up 12 hits as Lakenheath improved its league record to 9-1 and its overall mark to 11-1. Its only loss came May 5 at Heidelberg.

Jamie Beach went 4-for-7 and Lindsey Dunn went 5-for-6 for Ramstein, which had an 8-0 conference mark and a one-game lead over the Lancers going into Saturday&#8217;s showdown

Lipor, Krysten Glab and Jessica Serd each had four hits in the doubleheader for the Lancers.

Lakenheath will be the top seed for the European Division I tournament Wednesday through Saturday at Ramstein. The three-time defending champion Lady Royals will be No. 2.

In other softball games Saturday:

Heidelberg 11-6, W&#252;rzburg 1-12: At Heidelberg, Kordia Holmes, backed by three hits from Ashley Peek and two from Megan Hendrix, picked up Wurzburg&#8217;s first victory of the season in the nightcap.

Briann Joyner won the opener for Heidelberg as Brittany Bailey drove in four runs, and Jessica Anderson and Mylynn Dumlo each had four hits for the Lady Lions (6-6, 5-5 Div. I).

Alconbury 15, Baumholder 11: At Alconbury, Megan Archer struck out seven and got 3-for-3 batting support from Ashley Lane. Alconbury is 4-4 overall, Baumholder 8-5.

Baumholder&#8217;s Teresa Cox was 3-for-3 in the loss, the first of the season to a Division III team by the Lady Bucs.