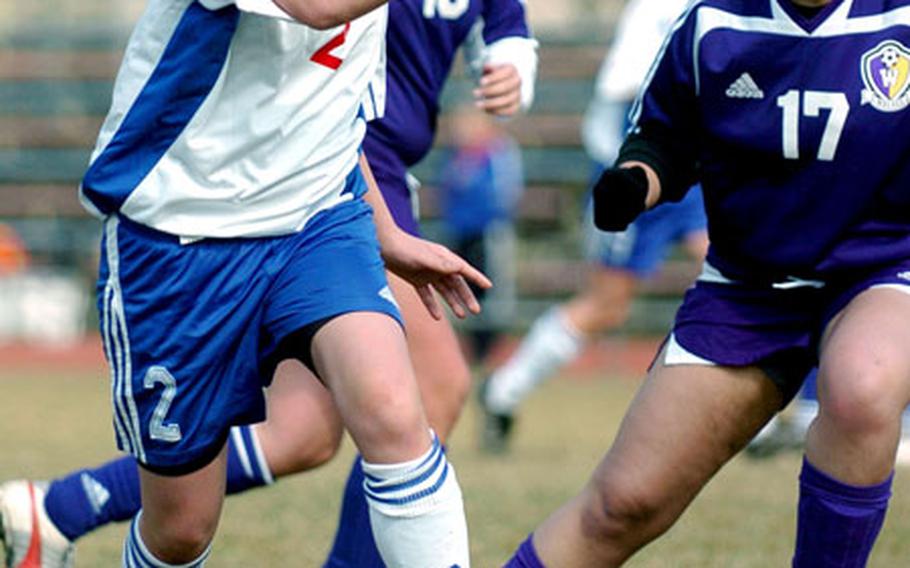 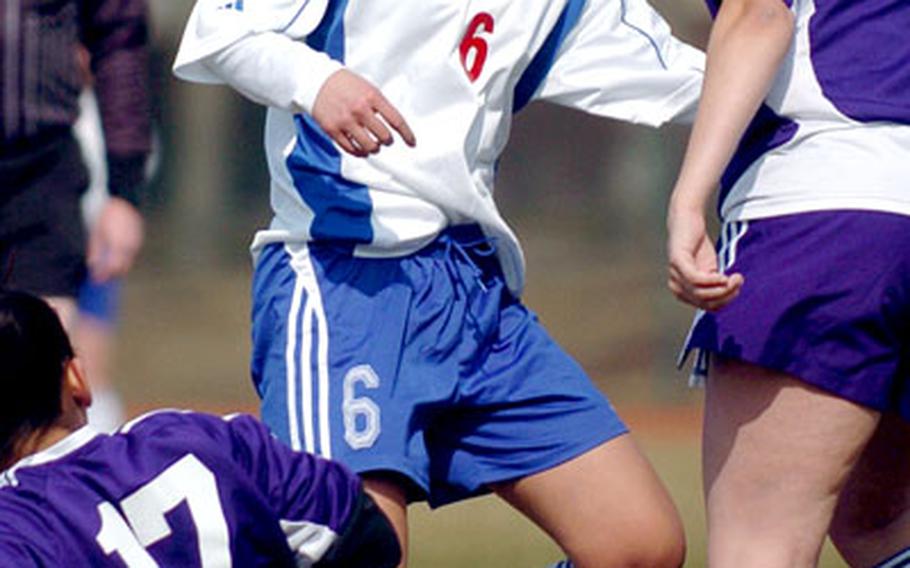 Aviano got two goals and two assists each from Stephanie Patrick and All-Europe sophomore Anna Schrader to post a 7-0 courtesy-rule victory Saturday over visiting American Overseas School of Rome.

In other girls games of note on opening weekend:

ISB 3, Wiesbaden 1: At International School of Brussels, Lydia Gray scored twice to lift the Raiders to a Division I conference victory.

Gray and Kate Hausdorff, both center-midfielders, dominated that part of the field for ISB, allowing only four shots on goal by Wiesbaden. Christy Colvin, assisted by Katie Foxworth, scored the Wiesbaden goal.

Ramstein coach Ricardo Buitrago also was impressed with the play of Helen Della-Rovere, a stopper and midfielder, and midfielders Susie Fluker and Sage Lovato.

Heidelberg 2, Patch 0: At Heidelberg, both offenses struggled, according to Heidelberg coach Jim McCauley. His Division I Lady Lions got goals from Courtney Cain and Ariel Heath, and Heath made three saves.

Brussels 3, Giessen 1: At Brussels, Brianna Fitch scored once in each half, and the defense of Elizabeth McVicker, combined with the all-around play of Marie Reiman and Madison Battersby, nailed down the nonconference victory. Brussels suited up only 11 players.

Naples 5, Marymount 3: At Naples, Kelsey Anderson scored three goals as the Wildcats jumped out to a 4-0 halftime lead. Dominigue Aljabi added a goal and an assist for Naples.

Lakenheath 4, Alconbury 0: At RAF Lakenheath, England, Greta Gerstner and Desiree Colbert each scored twice in the first 25 minutes of this interconference matchup between schools from the largest and smallest classifications in Europe.

Brussels 3, Giessen 1: At Brussels, Brianna Fitch scored in the 35th and 53rd minutes in a game between teams that will play in Division IV at Europeans in May.

Noteworthy&#8212;Gray and Kate Hausdorff played well in midfield for ISB as did Amanda Bryant for Wiesbaden, according to their coaches.