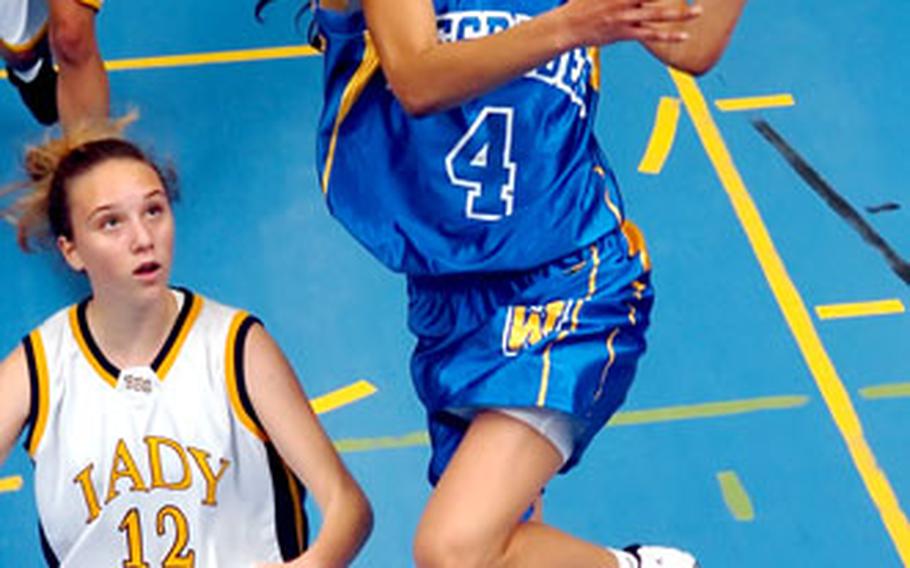 Wiesbaden’s Brittany Harris glides to the hoop past Heidelberg’s Fallon Puppolo for a layup during the season-opener for both teams Friday night in Heidelberg, Germany. Wiesbaden held off a late Heidelberg rally to win 53-50. (Raymond T. Conway / S&S)

Wiesbaden’s Brittany Harris glides to the hoop past Heidelberg’s Fallon Puppolo for a layup during the season-opener for both teams Friday night in Heidelberg, Germany. Wiesbaden held off a late Heidelberg rally to win 53-50. (Raymond T. Conway / S&S) 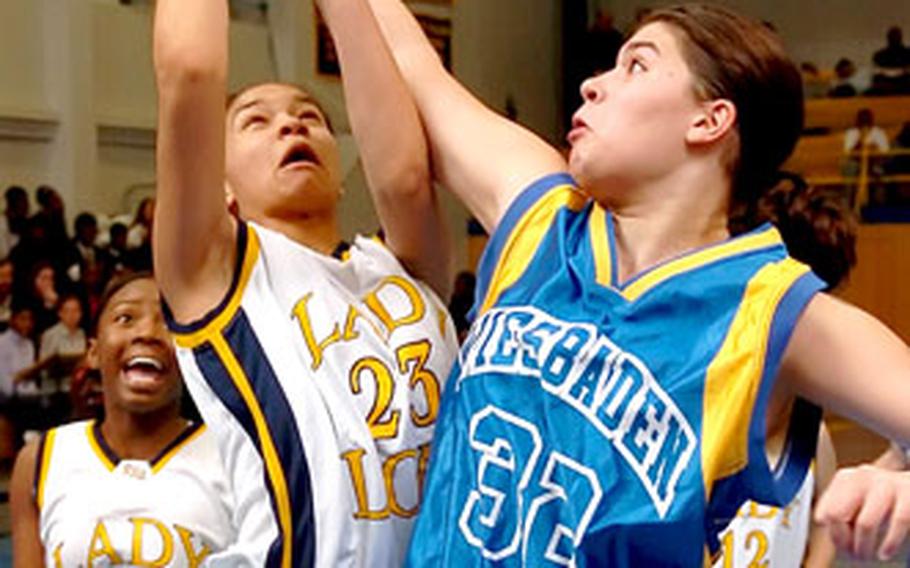 KAISERSLAUTERN, Germany &#8212; Freshman Kamiko Williams made a memorable basketball debut Friday night, coming off the bench to score 22 points and lift Kaiserslautern to a 44-38 victory over the International School of Brussels in a nonconference game between Division I teams.

Williams, daughter of longtime U.S. Army Europe men&#8217;s star Vincent Williams, went 9-for-16 from the floor and 2-for-5 from three-point range. She also grabbed eight rebounds, made three steals and blocked a shot.

On Saturday, K-town defeated ISB 43-30 in the game that counted in the conference standings. Lynndsey Hyter scored 21 points and Williams added eight to help the Lady Raiders become the only Division I team with a conference victory.

As ISB cut into the Lady Raiders&#8217; lead in the fourth quarter, Williams responded with nine points to seal the victory.

K-town held Gibson and Crotty to three total field goals over the next two periods.

SHAPE 45-52, Lakenheath 25-22At SHAPE, Belgium, freshmen Ashley Jordan and Ebonee DeVos had fine debuts for the Lady Spartans in a weekend sweep.

Jordan led all scorers both days, with 10 points Friday and 20 on Saturday, when she also had 11 rebounds and nine steals.

Baumholder 53, Alconbury 24; AFNORTH 53, Alconbury 28At Alconbury, England, the defending Division IV champions struggled to fill the void left by Carly Bascom, Christina Arredondo and Katie Schonder, all of whom transferred.

Aviano, under new coach Terry Hoffman, had 53-13 and 49-9 courtesy-rule victories at Marymount International of Rome. Naples did the same to visiting Milan, 57-16 and 63-23, and Sigonella swamped visiting Vicenza in Saturday&#8217;s conference game 49-9. That victory followed a 43-33 nonconference victory Friday.