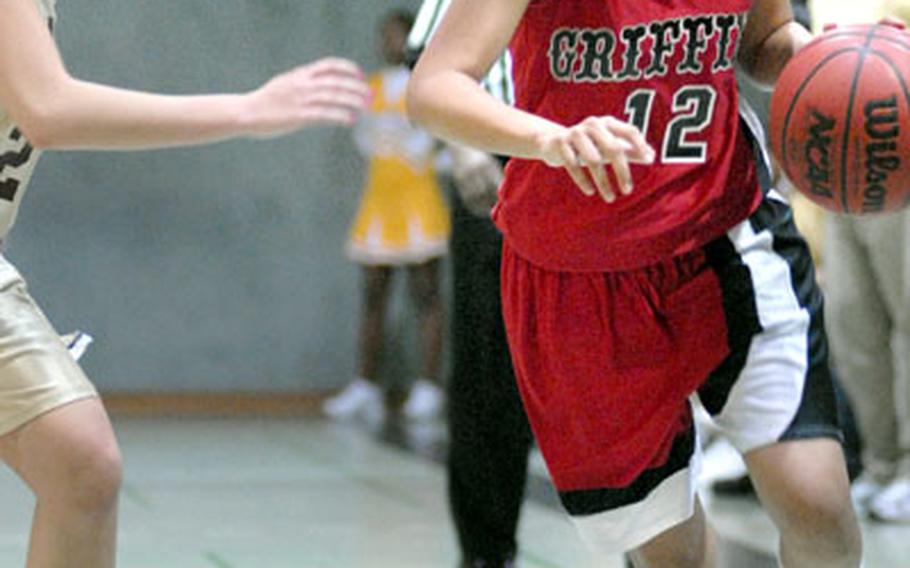 Elisha Darby of Giessen drives past a Baumholder defender on the way to the basket late in the fourth quarter at Baumholder on Saturday. Darby scored 20 points to lead Giessen over Baumholder, 49-38. (Ben Bloker / S&S)

Brussels, the defending European Division IV girls champion, opened its season with a convincing 24-13 victory over its D-I neighbor, the International School of Brussels.

Reliesha Burns led the Lady Brigands with 11 points and 12 rebounds and the defense limited ISB to six points over the final three periods on Friday night.

In other girls games on opening weekend:

Naples 51, Sigonella 11: At Naples, Italy, the Lady Wildcats moved atop the American Schools in Italy League standings Saturday by posting their second double-digit victory in as many days.

Nyrika Davis, who scored 19 points in Friday&#8217;s 51-23 league victory over Marymount International of Rome, poured in 23 points in Saturday&#8217;s triumph that left Naples 2-0 in league play.

Darion Moon, who scored 15 points Friday, got 20 in Saturday&#39;s 40-point courtesy-rule victory over the defending European Division III champ. The Lady Jaguars fell to 0-2 in league play after a 51-31 defeat to Marymount, also on Saturday.

Vicenza 50, AOSR 23: At Rome, Chakeira Gilbert scored 41 points Saturday as the Lady Cougars rebounded from a 44-39 nonconference loss to American Overseas School of Rome on Friday.

The blocks gave McNeely 13 for the weekend. She swatted away seven, and stole the ball four times, while scoring 14 points in Friday&#8217;s 42-6 nonconference victory over Milan.

Hohenfels 37, Mannheim 19: At Hohenfels, the Lady Tigers of Division III completed a weekend sweep of D-II&#8217;s Mannheim behind 21 points from Vanessa Turner and eight steals from Mica Nicholson.

Heidelberg 29, Bitburg 28: At Bitburg, Shae Rogers sank a short jumper with four seconds to play Saturday to give the Lady Lions a victory over the defending European D-II champion.

The loss was the second to a Division I school in two days for Bitburg. Ramstein whacked the Lady Barons 60-24 on Friday night behind 22 points from All-European Kendra Lenoir.

Giessen 49, Baumholder 38: At Baumholder, Elisha Darby poured in 20 points, Tiana Benjamin added 10 points and 14 rebounds and Amanda Gray chipped in 11 points and four steals for Giessen in the opening game for both teams on Saturday.