Baumholder’s Rashad Taylor flies over Aviano’s defense for a first-quarter first down in a Division II playoff game at Baumholder on Oct. 21. Taylor finished with 19 carries for 278 yards to lead Baumholder to a 61-36 victory over Aviano. (Ben Bloker / S&S)

Baumholder’s Rashad Taylor flies over Aviano’s defense for a first-quarter first down in a Division II playoff game at Baumholder on Oct. 21. Taylor finished with 19 carries for 278 yards to lead Baumholder to a 61-36 victory over Aviano. (Ben Bloker / S&S) 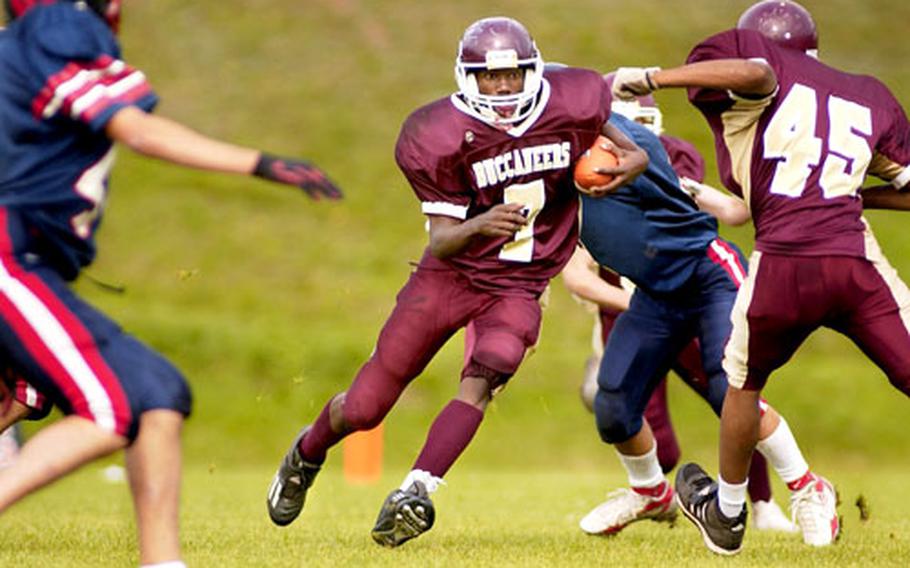 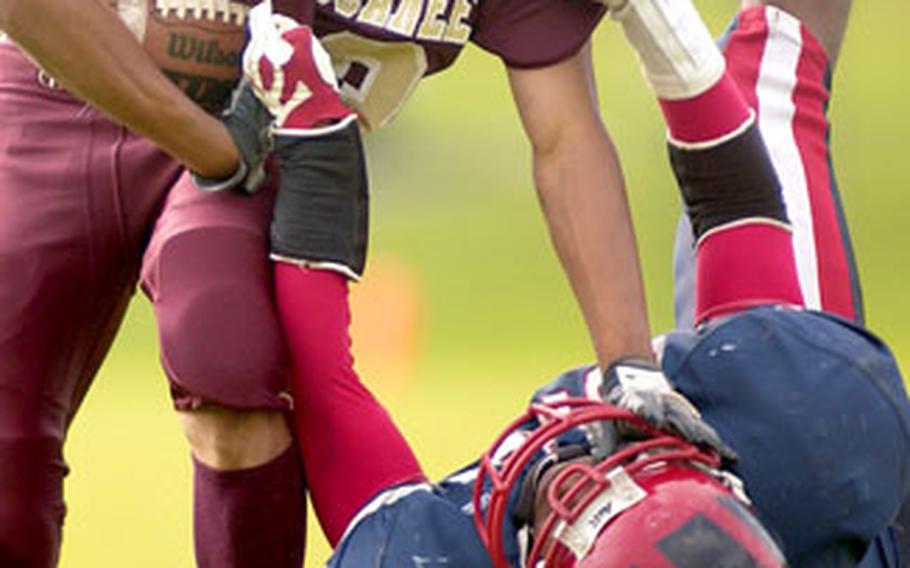 Bitburg played up to its No. 1 seed in Division II-North on Saturday, romping to a 39-0 victory over visiting W&#252;rzburg in its playoff opener.

Running back Anton Harris carried 19 times for 139 yards and scored three times for Bitburg. Quarterback Josh Collett, who ran for touchdowns of 60 and 20 yards, gained 107 yards on seven carries.

Jimmy Watts scored on a 50-yard fumble return, and Jason Bush and Mitchell Christiansen also ran for touchdowns, although not all will count in the final stats because of the DODDS-Europe 39-point courtesy rule.

Not content with their offensive output, Collett intercepted two passes and Harris one. Harris and Chris Ramos each had eight tackles, and Terron Jeter was in on 10 stops Bitburg (5-1).

Naples 38, SHAPE 0At Naples, Italy, the undefeated Wildcats, the II-South top seed, rolled behind running and passing touchdowns by quarterback Tyler Terronez and earned a semifinal date at home against Baumholder next Saturday.

Terronez, 3-for-8 for 80 yards with an interception, passed 32 yards to Zach Main for one score and ran 10 yards for a second. B.J. Taylor, Dwayne Robinson and T.J. Lamar also ran for Naples TDs, and Tyler White kicked a 30-yard field goal.

The Wildcats (6-0), who got 16 tackles from Patrick Bowe, 12 each from Ryan Fitzgerald and Phillip Perez and a 40-yard interception return from Will Carrico, led 31-0 at halftime.

Baumholder 61, Aviano 36At Baumholder, Rashad Taylor ran for touchdowns covering 5, 27 and 83 yards and finished with 278 yards on 19 carries.

Gary Vogt threw two TD passes in the first quarter, a 20-yarder to Andrew Dean and a 4-yarder to Brad Karlolchyk. Vogt completed 13 of 21 passes for 223 yards.