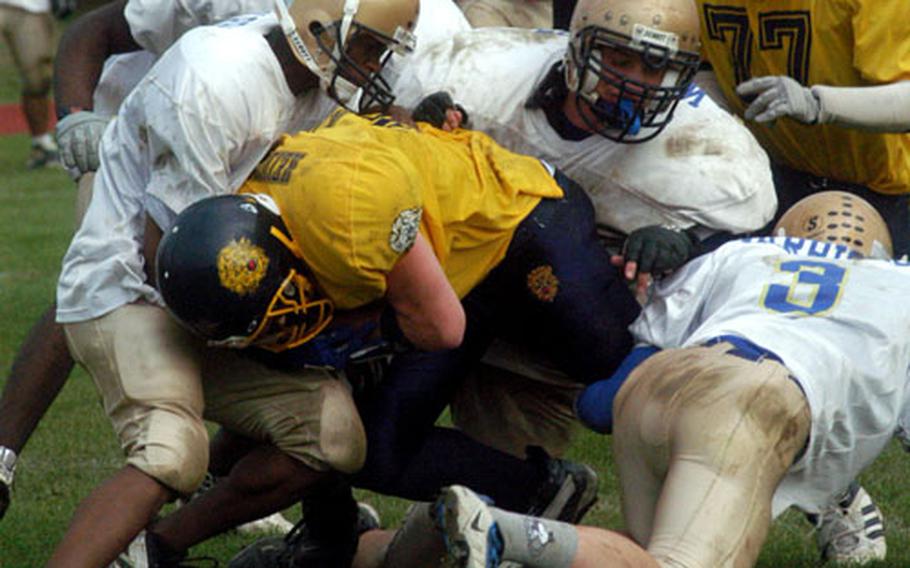 Heidelberg running back Andrew Spellman gets tackled by the Wiesbaden defense Saturday during the fourth quarter of Wiesbaden’s 14-13 victory in Heidelberg, Germany. (Charlie Coon / S&S)

Heidelberg running back Andrew Spellman gets tackled by the Wiesbaden defense Saturday during the fourth quarter of Wiesbaden’s 14-13 victory in Heidelberg, Germany. (Charlie Coon / S&S) 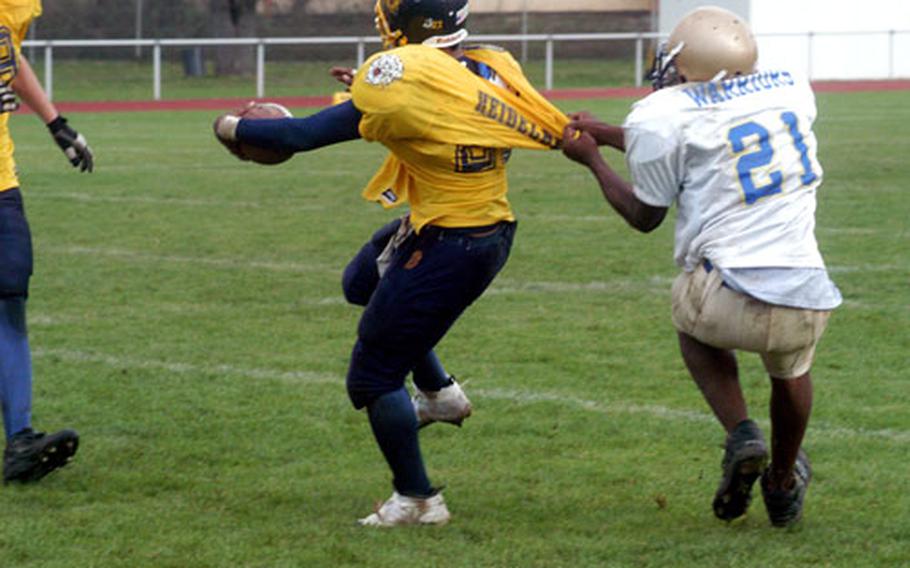 Wiesbaden’s Isaac Horton grabs the jersey of Heidelberg running back Lewis Allen Jr. and drags him down. (Charlie Coon / S&S) 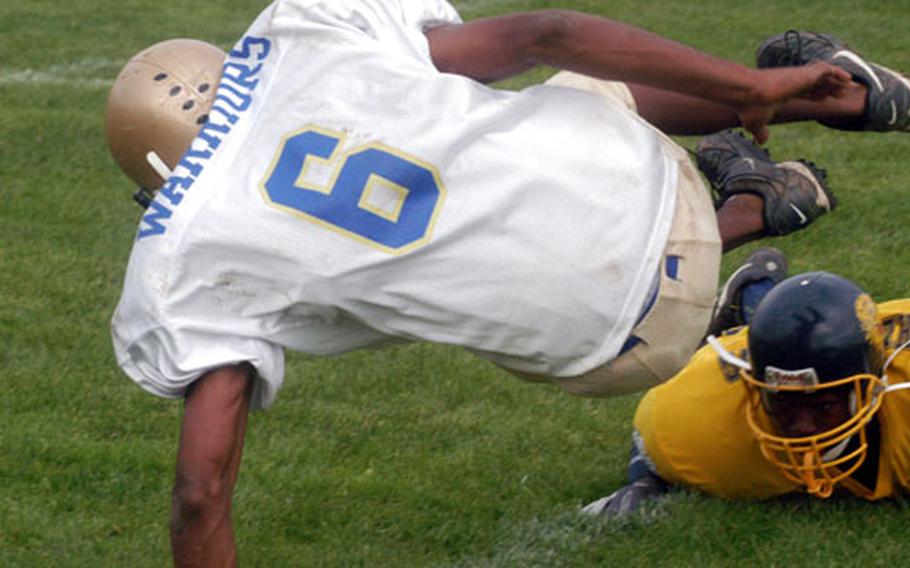 Wiesbaden Warriors receiver Marcus Lewis flies through the air after a pass intended for him was broken up by Heidelberg’s Darvelle Rivers. (Charlie Coon / S&S)

A Wiesbaden defense that shut down Heidelberg for most of the game gang-tackled All-Europe running back Lewis Allen just short of the goal line on a two-point try in the fourth quarter to preserve a 14-13 Division I victory Saturday.

The Lions (4-2), who had scored on a 26-yard run by Allen in the first quarter but were suffocated thereafter, broke through in the fourth quarter and sprang Allen for a 22-yard TD run.

After a Wiesbaden penalty on the PAT try, the Lions elected to go for two points and the lead, only to see Allen stuffed 5 inches from the go-ahead points.

Wiesbaden (4-2) held Heidelberg to minus-5 yards in the second quarter and 6 yards rushing in the third.

After being turned back on two goal-line stands by Heidelberg in the second period, the Warriors took the lead in the third quarter on a 9-yard bootleg run by quarterback Aaron Orr and a PAT kick by Parker that would prove decisive.

Parker then came back to intercept a pass to stop the Lions&#8217; final drive.

Chase Socha led the Wiesbaden defense with 11 tackles; Horton and Kendall Watt had 10 each.

Heidelberg got 14 tackles from Blair Wagner and 11 each from All-European Brandon Simmons and Justin Anderson.

In other Division I regular-season finales on Saturday:

W&#252;rzburg tied Lakenheath and Kaiserslautern with 1-4 conference records and 1-5 overall marks. Whichever school survives the school system&#8217;s tiebreaker process will play this Saturday at Ramstein in the Division I semifinals.

Lakenheath 17, Kaiserslautern 14At RAF Lakenheath, England, a 10-point third quarter handed the Lancers their first victory of the season and completed a comeback from a 14-0 first-quarter deficit.

Ben Green&#8217;s 26-yard field goal and a fumble recovery in the Kaiserslautern end zone by Travis Howland provided the victory margin for Lakenheath.

Lakenheath began its road back in the second period on an 11-yard TD pass from Wes Kleniec to Carl Snapp.

Lakenheath got 12 tackles and a sack-and-a-half from Jason Hacker, and Chris Price preserved the victory with a fourth-quarter interception.

Both teams finished the regular season 1-5 overall and 1-4 in league play.