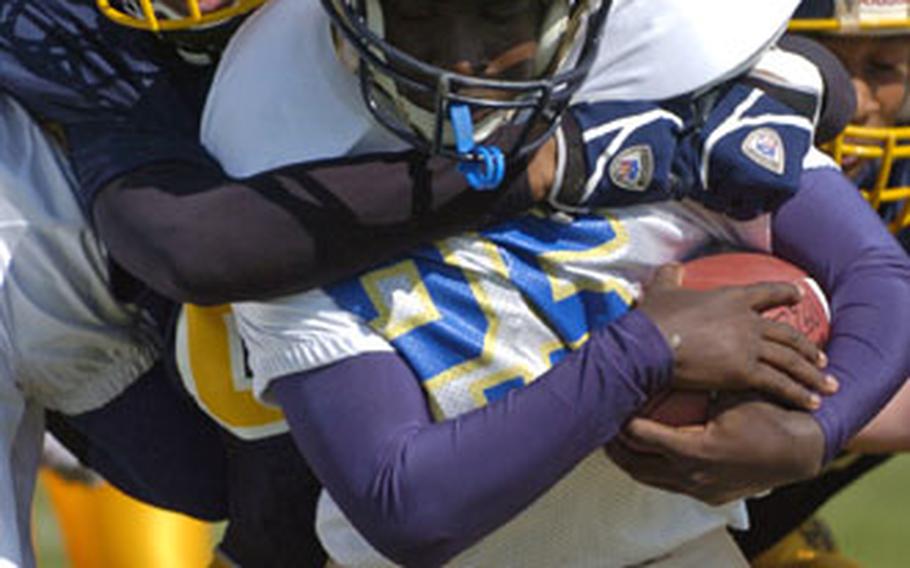 Wiesbaden’s Ronald Peebles is brought down from behind by Heidelberg’s Martin Elliot on Saturday. (Raymond T. Conway / S&S)

His returning All-Europe backfield mate, Chris Jones, carried 21 times for 112 yards as Heidelberg got a measure of revenge for last November&#8217;s 31-7 loss to Wiesbaden in the title game.

Wiesbaden cut the deficit to 14-7 in the second quarter by recovering a fumble in the Lions&#8217; end zone and got its second TD in the fourth quarter on a pass play from quarterback Aaron Orr to Jay Parker that covered 78 yards.

In other nonconference games Saturday involving Division I teams:

Ramstein 13, W&#252;rzburg 6At Ramstein, Adam Despres, who earlier had intercepted a pass, forced a W&#252;rzburg fumble on the Ramstein 1-yard line with two minutes left to preserve the win.

The decisive turnover was the fifth for for W&#252;rzburg and the 11th for the teams combined.

Ramstein fullback Joel Smith, who finished with 129 yards on 13 carries, broke a 45-yard TD jaunt in the first quarter as the Royals took a 7-0 lead. W&#252;rzburg answered with a 20-yard TD pass from Cameron Huffman to Joel Marbut, but failed on the conversion.

Greg Anderson&#8217;s 5-yard TD run was the only score of the second half. Ramstein teammate Cyril Borden rushed for 98 yards.

W&#252;rzburg got 79 rushing yards from Quinton Patterson and 10 tackles from Cameron Carroll.

Another returning All-European, Madison Hayes, led K-town with 13 tackles, but the Red Raiders could get little started offensively against the speedy Panthers. Their only score came in the fourth quarter, when quarterback Quinton Strawder hit Shawn Williams with a touchdown pass.