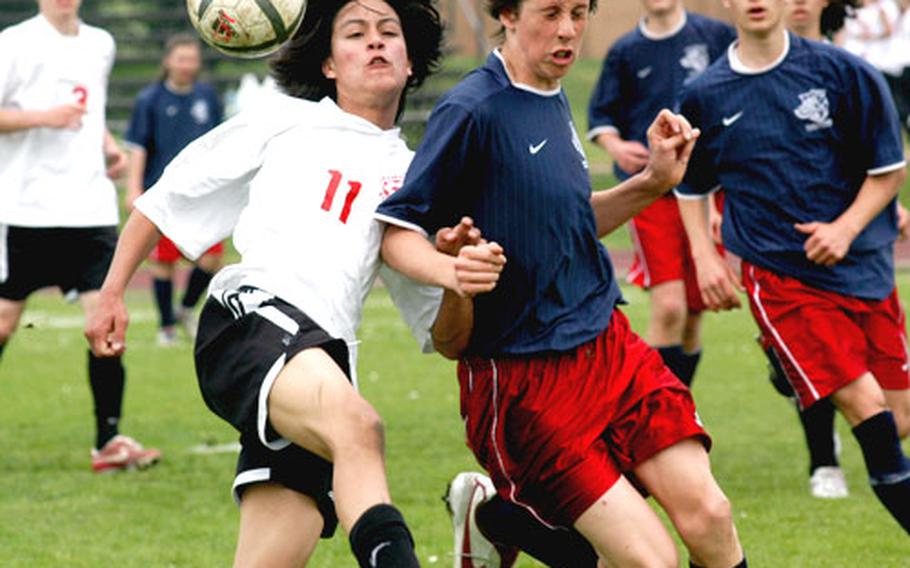 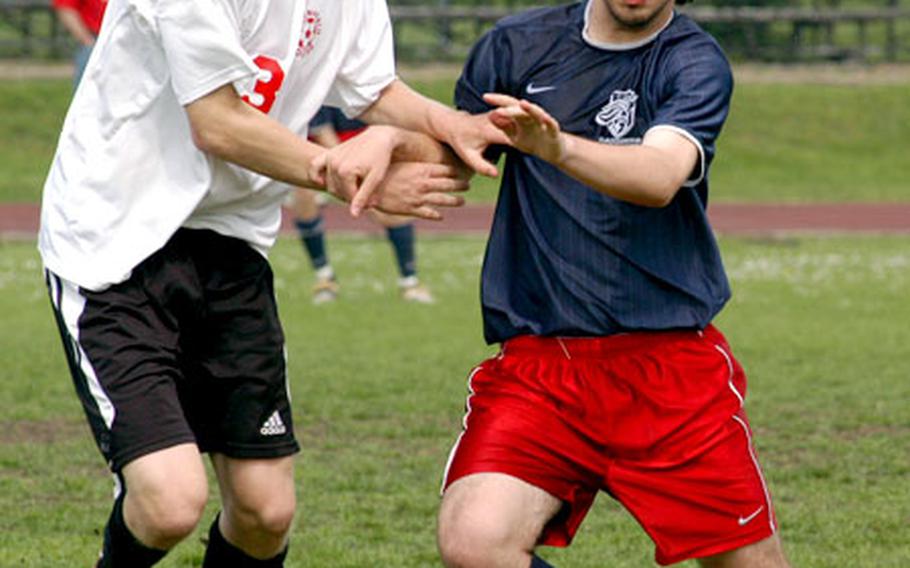 AFNORTH capped an unbeaten regular season with authority Saturday by nailing down the Division II-North boys soccer title with an 8-1 victory over visiting Mannheim in Brunssum, Netherlands.

Kaan Ercan had a goal and two assists for AFNORTH, which also got a goal and an assist from Chris Eden.

Mannheim (0-6-1), held to one shot on goal in the first half, scored on a breakaway by Rickey Gardner. Gardner, according to AFNORTH coach Greg Blankenship, made 15 saves as the keeper in the first half.

In other boys games of note Saturday:

BFA 6, Vilseck 0: At Kandern, Germany, six Falcons scored as Black Forest Academy wrapped up the No. 1 seed in the Division II tournament.

Heidelberg 2, Ramstein 1: At Heidelberg, Sean Kerber put two headers into the net on corner kicks by Matt Orlowsky as the Lions rallied to claim the No. 2 seed in Division I.

Alconbury 5, Menwith Hill 1: At Alconbury, Andrew Hunt and Cristian Felice each had a goal and an assist as the Dragons claimed the III-North crown. Both teams will play in the Division IV tournament at Ramstein.

Hohenfels (5-1, 4-0 III-South) is the probable No. 2 seed for the Division III tournament behind three-time defending champion American Overseas School of Rome.

Noteworthy&#8212;Both Kerber goals came off headers on corner kicks by Orlowski, reported coach Larry Heintzman, whose Lions improved to 6-1, 5-1 in D-1 and earned the second seed in the European tournament. Ramstein, the defending D-1 champs, will take a 4-2-1, 4-2 mark and the third seed into the event.

Noteworthy&#8212;Alconbury clinched III-North championship at 3-0, and will take 5-2 overall record into Europeans; Menwith Hill is 0-7 overall, 0-3 in league. Both will compete in Division IV.

Noteworthy&#8212;Aviano and Vicenza will take 1-4-1 records into European tournaments; Aviano will play in D-2, Vicenza in D-3.

Noteworthy&#8212;Milan (3-2-1) will defend its Division IV championship in the upcoming tournament. Sigonella (0-6-0) will play in Division III.