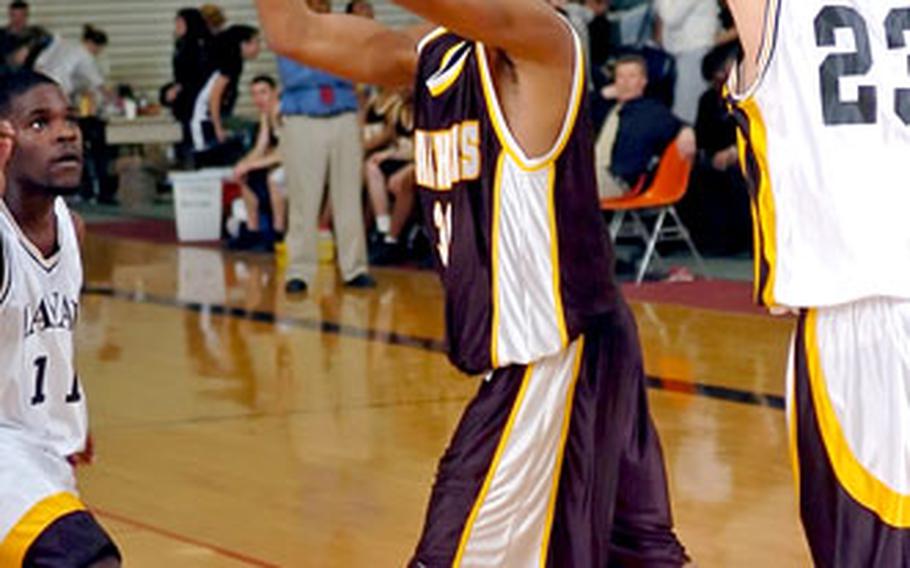 Sonny Clark scored 21 points on Friday and 18 on Saturday as Baumholder closed out its regular season at 11-3 overall and 6-2 in league play. Giessen fell to 10-2, 4-2 with league games remaining on Friday and Saturday at Bamberg.

If Giessen sweeps those games, Baumholder ends up champs. A Bamberg sweep would set up a points-differential tiebreaker between the Barons and Baumholder. A split would hand the Bucs the title. Giessen cannot finish first.

Baumholder, which led 26-19 at halftime Friday, withstood a 24-point fourth quarter to claim that victory, then rallied from 18 points down in the first half on Saturday for the second win.

Baumholder outscored Giessen 23-19 over the final eight minutes for the victory.

Aviano 71-76, Vicenza 31-51At Aviano, Italy, the Saints (13-0, 7-0) cruised to the American Schools in Italy league crown behind double-figure scoring by six different players.

Wiesbaden sets up showdownThe Wiesbaden Warriors will host the Division I regular-season title game this Saturday against W&#252;rzburg.

Wiesbaden arranged the scenario by edging Ramstein 55-54 on the road on Friday and thumping Kaiserslautern 46-33 on Saturday.

Cannie broke loose for 40 points on Friday and 29 on Saturday for Hanau (11-3, 4-0). Hanau holds the head-to-head edge over the only league team, Black Forest Academy, with a mathematical possibility of equaling its record.