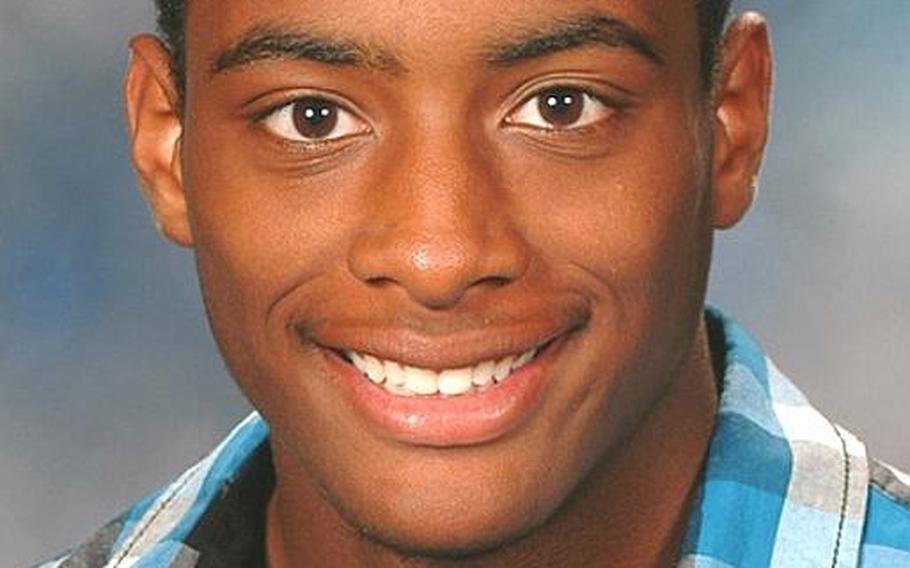 A sophomore at Wiesbaden, Nicholas Colbert became the only sprinter at a DODDS-Europe school to break the 11-second mark in the 100 meters this season, earning honors as Stars and Stripes&#39; Athlete of the Week for April 28. (Courtesy photo)

A sophomore at Wiesbaden, Nicholas Colbert became the only sprinter at a DODDS-Europe school to break the 11-second mark in the 100 meters this season, earning honors as Stars and Stripes&#39; Athlete of the Week for April 28. (Courtesy photo) A junior at Brussels American, Alexandra McVicker scored two goals and added two assists to help her team to a 5-2 victory over Alconbury and earn honors as Stars and Stripes&#39; Athlete of the Week for April 28. (Courtesy photo)

Last week - Colbert, a sophomore sprinter, became the first and only runner in Europe this season to run the 100 meters in under 11 seconds when he covered the distance in a personal-best 10.87 seconds Saturday at Ramstein.

Colbert&rsquo;s time was faster than any European-championship-winning 100 since DODDS-Europe record-holder Isaiah Fluellen of Ramstein took gold in 10.77 in the 2001 Euros.

According to Wiesbaden sprint coach Larry Chavez, Colbert&rsquo;s drive has propelled him into the ranks of the sub-11-second sprinters.

&ldquo;Nick is a very hard worker and is a joy to work with,&rdquo; Chavez wrote in a Monday email. &ldquo;He continues to improve, along with his teammates, and is working on correcting some of his flaws so that he becomes more efficient.&rdquo;

Last week - McVicker, a junior striker, scored two goals and handed out an equal number of assists Saturday to help the Lady Brigands to a 5-2 Region I victory over the visiting Alconbury Lady Dragons. McVicker&rsquo;s production helped Brussels even its season record at 2-2 going into Friday&rsquo;s game against Rota at Alconbury.

For all her individual prowess, however, McVicker isn&rsquo;t concerned with her totals, according to Marinich

The team will be foremost again on Friday. A victory over Rota would hand the Region I Small-Schools crown to the Lady Brigands, who already have defeated the other two teams in the group. In addition to Saturday&rsquo;s victory over Alconbury, Brussels downed Menwith Hill, 1-0 on the road on April 2 as McVicker assisted on the game&rsquo;s lone goal. Both of the Lady Brigands&rsquo; defeats have come against larger schools &ndash; 4-2 at D-II AFNORTH on March 26 and 5-2 against visiting SHAPE of Division I on March 30.