Elliott was everywhere on the field for champion Dragons 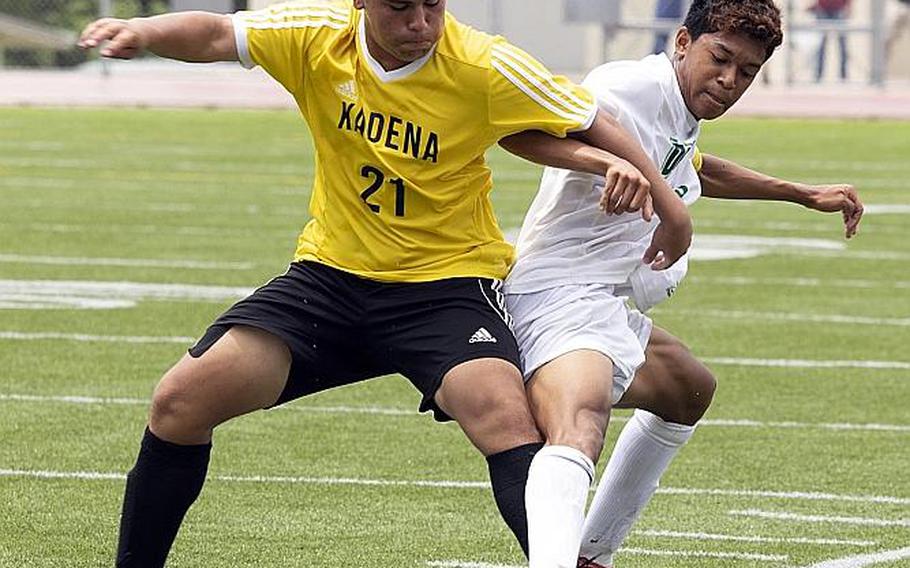 CAMP FOSTER, Okinawa – There is no such position in the world of soccer, but Ryo Elliott might as well have one named just for him: “Wherever he’s needed.”

“When the game begins, I try to be helpful,” the Kubasaki senior center-midfielder said last Friday, two days after winning the Most Valuable Player award of the Far East Division I boys tournament.

“When we needed a goal, I’d be up front trying to set up a goal or an assist for a goal. When we were leading, I would try to help out more defensively and hold onto the lead.”

And he was not one to worry about individual goals and assist numbers, Elliott said. Just as long as the number under the name Kubasaki on the scoreboard was more than the other team’s, and as long as the numbers kept piling up in the win column of Kubasaki’s standings.

“He got moved around a lot,” Dragons coach Chris Eastman said. “We tried him on the wing, center offensive and defensive midfielder, center back. He played all over, depending on what we needed. And he wouldn’t say a word.”

It was that sort of team-oriented selflessness, Eastman said, that led to the MVP selection. And it’s a key reason why Elliott has been named Stars and Stripes Pacific high school boys soccer Athlete of the Year.

“He has the talent to play in numerous positions,” Eastman said. “He would play wherever he was needed.”

Elliott finished this season with 15 goals and seven assists, and combined with scoring talents such as Judge Morgan (24 goals, 5 assists), Noah Hayes (13, 4) and Sinjin Pharathikoune (7 goals) to power the Dragons to a 24-1-1 record and the D-I title.

But overall through four high school seasons, including two D-I titles and a 2017 runner-up finish with Kubasaki, Elliott’s totals have always been understated. He closes his career with just 30 goals and 13 assists, one coming in his first high school season with Humphreys.

His understated statistical nature dates back to when he first began playing soccer, in middle school, and “as soon as I started, I didn’t much care about goals. I just did what the coach wanted me to do,” Elliott said.

Which kind of made it unusual, Eastman said, that Elliott would be awarded the 2017 Far East D-I Golden Boot, which goes to the tournament’s top scorer. And he did score nine of his 12 goals last season during Far East.

“But the Golden boot normally goes to a center forward; to win it last year as a center mid showed that we were asking him to do everything, go forward to score, go back to help defend in the box,” Eastman said. “I don’t imagine you’d find many center mids in that group.”

The runner-up finish to Kadena, 1-0 in two overtimes, in the 2017 D-I final served as a motivator for this season, Elliott said. “We didn’t give it our all (in 2017), but this season, the reason we won was because of last year’s loss.”

And while Golden Boot and MVP awards do carry some cachet with them, a team championship, or two within three seasons, “speak much louder than individual honors, for sure,” Elliott said.