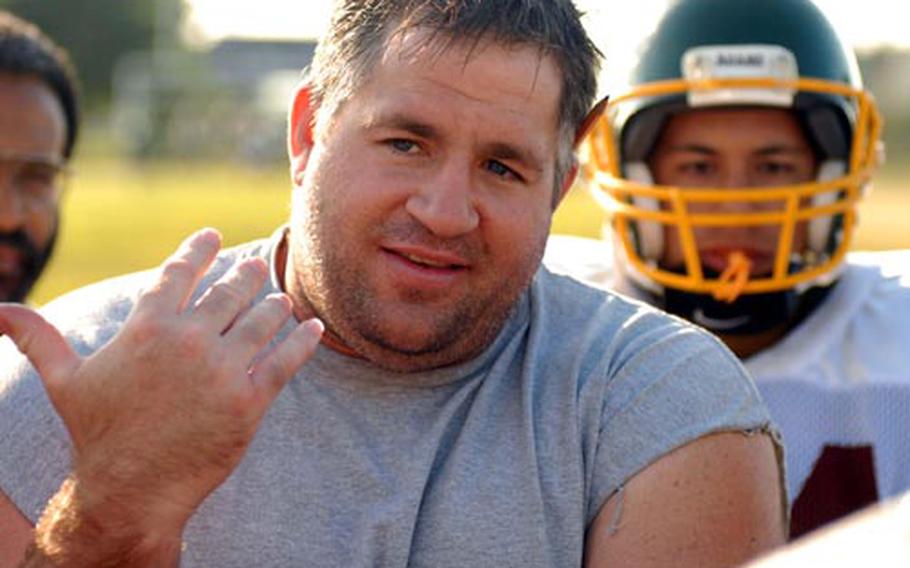 But peek between the covers of the two-time defending Class A champion Eagles&#8217; book. One will find the support troops, the players behind the scenes and in the trenches who made the "Fantastic Four" shine.

What kind of impact, the Eagles hope to find out Friday when they visit Zama American to open the DODDS-Japan Football League season. In the other opener, nine-time JFL and Kanto Plain Association of Secondary Schools champion Yokota visits Nile C. Kinnick. Kickoffs are at 7 p.m.

Waite hopes that one of those impact players might be junior Johnell Alexander, the hero of the Eagles&#8217; 27-6 victory in the Class A title game at Daegu American. He&#8217;ll replace Moton at tailback. Waite will try seniors Ty Wooten and Drew Holder at quarterback to replace Latimore.

Most of them will leave after this season &#8212; and Waite says he got no help from the PCS plane this summer.

"Not a single move-in player who can help the varsity. Shocking," Waite said. "Look back over history, I can&#8217;t believe it. My first year, David Leh, Vaughn Junchaya, even last year, Johnell, Keister and Nelson all moved in. It creates kind of a void" after this season, he said.

Plus, they have to deal with their JFL opponents:

Speed is the hallmark of a Nile C. Kinnick squad seeking its first league title since 1998, and the team hopes breakaway backs Tyree Hunt and Donavan Brown can carry the mail toward that effort.

Though many of its top stars graduated, Zama American&#8217;s wing-T is still a dangerous weapon with junior Emmanuel Sloan at the controls and junior Ken Schulteis plowing the road.

Waite says he&#8217;s not taking anything, least of all a third straight Class A title or a school-first JFL crown, for granted.