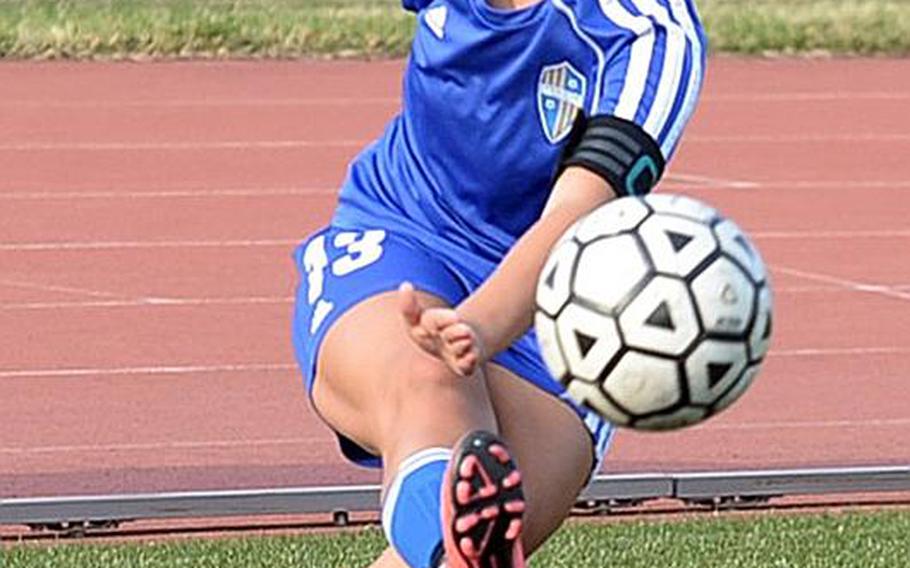 Like most of her peers, Regina Dukat had some ups and downs in high school.

As a freshman and sophomore, the Panthers relished the feeling of capturing the title in the 2015 and 2016 Far East Division II Tournaments. But they stumbled badly in 2017 thanks to transfers and graduations and did not place during Far East.

“We had something to prove” entering the 2018 season, said Dukat, a three-time All-Far East D-II selection. “When we came back (from 2017), we knew we had some strong players who PCSed in and had a lot of potential that we were going to redeem ourselves.”

Yokota incorporated inbound striker Caleigh Garcia into the lineup along with new options at defense, to go with returning talents such as Jamia Bailey at striker and Dukat in the middle.

Together, they fashioned arguably the best season in Yokota girls soccer history: A 31-1-1 record, the Panthers’ first Kanto Plain Association of Secondary Schools title, the DODEA-Japan tournament title and their third D-II championship in four years.

Dukat recorded 18 goals and 27 assists and has been named Stars and Stripes’ Pacific high school girls soccer Player of the Year.

While Bailey tallied 32 goals and Garcia 41 goals to lead the team, it was Dukat who was “the most genki (Japanese for energetic) with all of her teammates,” coach Matt Whipple said.

“I’m optimistic on the field, whether we’re down or winning by five goals,” Dukat said.

“You keep your feelings light on the field. When you’re positive with your teammates, it will show through your playing. Once it becomes a chore, you stop communicating and playing well, so you have to keep that positive mindset.”

Other coaches always took note of Dukat’s presence on the field. One, Manny Duarte of Zama, said he had to formulate plans for her over the four seasons.

“She’s of critical importance to their success,” Duarte said. “She’s a leader on the field, a very active player, she heads the ball a lot, wins a lot of balls in the middle and leads the team from that position, transitioning from defense to offense very well.”

Dukat’s championship run with Yokota came to an end on May 23, when she tallied her 18th goal and helped the Panthers dethrone Matthew C. Perry 3-0 in the D-II final, making the last time she donned jersey No. 13 the best of possible times.

“I’m grateful for that,” Dukat said.