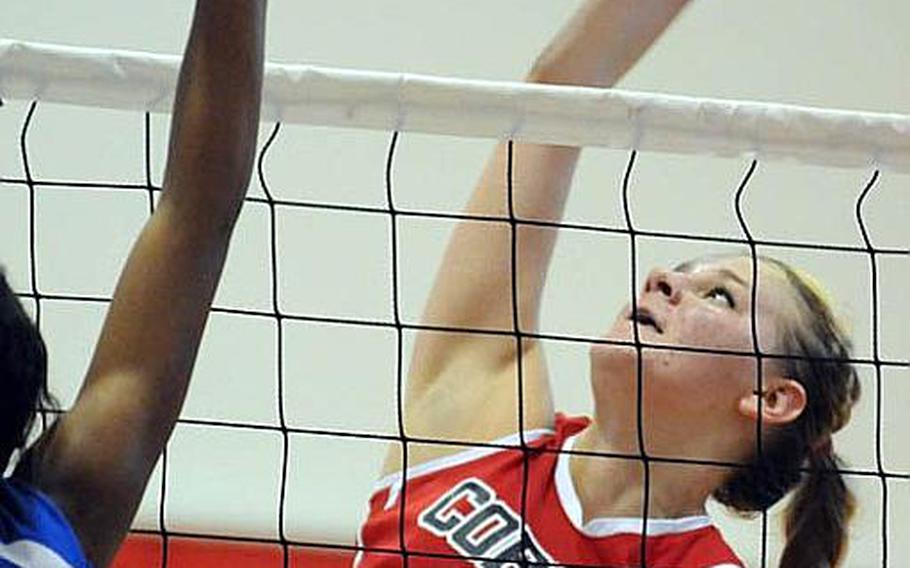 Buy Photo
E.J. King Cobras junior middle blocker Katie Rock has helped the Cobras to No. 3 in DODDS Japan. A Far East Division II Tournament title contender would be a first for the school. (Dave Ornauer/Stars and Stripes)

Buy Photo
E.J. King Cobras junior middle blocker Katie Rock has helped the Cobras to No. 3 in DODDS Japan. A Far East Division II Tournament title contender would be a first for the school. (Dave Ornauer/Stars and Stripes) 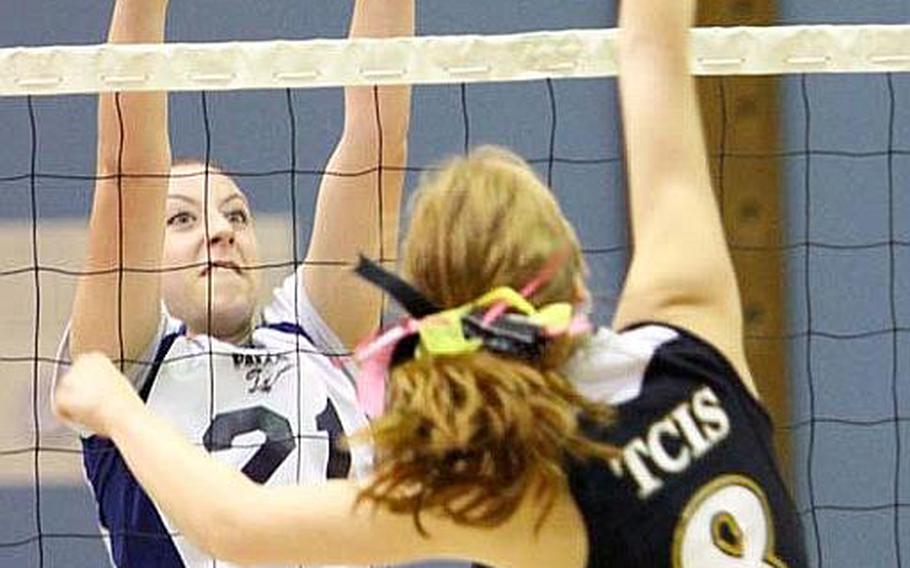 The victory prolonged what has become a 12-match winning streak for the Falcons since they began the season 3-2, the two sandwiched around a mid-season venture to the Okinawa District Volleyball Festival, which she says changed the team&rsquo;s entire focus.

&ldquo;Their whole mentality shifted after Okinawa and they&rsquo;re starting to believe more,&rdquo; Rogers said. &ldquo;They&rsquo;re more relaxed. If they make a mistake, they don&rsquo;t tense up. As the bench players tell them, it starts with a pass and ends with a smile.&rdquo;

That said, Rogers is aware that her team is the one being targeted now.

&ldquo;We have the big bull&rsquo;s-eye,&rdquo; she said Thursday, three days before the Falcons begin their title defense on Monday on their home court. &ldquo;If we go in and play our game, we&rsquo;re going to be fine.&rdquo;

The same could hold true for the Warriors, coach Joanna Wyche said, depending on which Warriors team shows up to play starting Monday in the D-II Tournament, also on Daegu&rsquo;s home ground.

They benefitted similarly when they accompanied the Falcons to Okinawa, finished with a 9-5 regular-season record and opened the KAIAC tournament with a four-set win over Seoul Foreign. But after leading Seoul American by a set in that semifinal, things fell apart.

&ldquo;We were ready and we were dominating,&rdquo; Wyche said, adding that perhaps her team, minus its graduated star core of Kristina Bergman, Angie Robinet and Gulee Kwon, may have let down as a result.

The last non-DODDS team to win the D-II title, Morrison Academy of Taiwan, along with E.J. King of Japan led by sisters Ashley and Katie Rock, could be threats to unseat the Warriors.

To make it three straight championships, the Warriors &ldquo;have to know and have to want it, hang in and keep playing and never, ever take a match off,&rdquo; Wyche said.