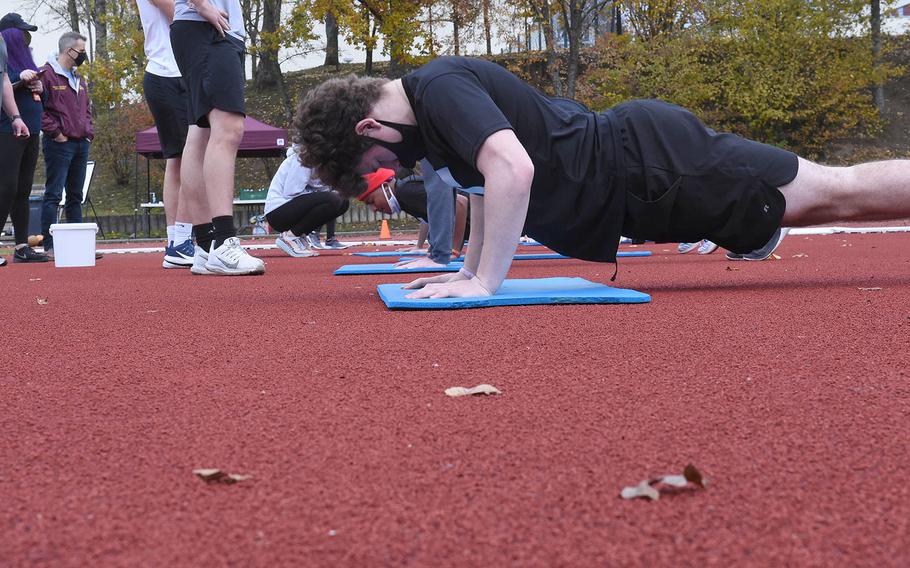 Winners were announced Tuesday afternoon in DODEA-Europe cross country and European Athletic Fitness Games competitions that saw all teams competing remotely at their home facilities over the past few weeks.

Ansbach’s Alexander Adams won the 5-kilometer boys cross country race in 17 minutes and 22 seconds, crossing the line 26 seconds ahead of teammate Lucas Morecraft, who led 58 other competitors. Lakenheath’s Ava Trembath finished first in the girls’ event in 18:59.5, about nine seconds better than Naples’ Arianna Coats in a field of 55 runners.

The Royal five-person boys team only finished first in one of the eight events – pushups – but finished second in four others (3,200-meter run, standing broad jump, kneeling basketball throw and sit-ups) to grab 56 total points. Wiesbaden, second with 48 points, was first in the 3,200, basketball throw and sit-ups in the nine-team field. Vicenza, third with 42 points, won the wall sitting and pro-agility events, while fourth-place Vilseck (41) was first in the broad jump.

The Raiders’ six-person co-ed team took first in all but two of the eight events, allowing them to finish last in the sit-up event and still top Ramstein 52-46. Seventh-place Baumholder shone in push ups with 356 completed and Wiesbaden totaled 742 sit-ups to win that event.

The Warriors (59) edged AFNORTH (56) and Vicenza (56) in the three-team girls competition. Wiesbaden won five of the eight events, with Vicenza triumphing in the basketball throw and pro-agility events and AFNORTH taking first in the wall sit.

The races, all scheduled to run on tracks to try to provide similar conditions, follow a seven-team in-person championship Oct. 24 near Ramstein won by Stuttgart’s Ella Bishop and Kaiserslautern’s Griffen Parsells.

Many athletes competed remotely all season due to restrictions imposed by the coronavirus pandemic that prompted DODEA to scrap football and volleyball before those seasons even began. There was an abbreviated tennis season before the championships were canceled. Cheerleading results are still being determined.