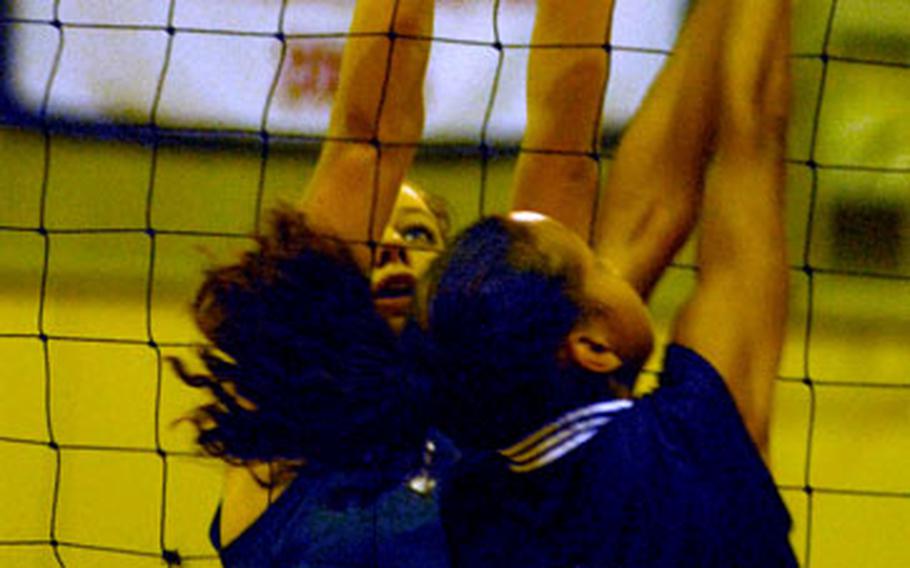 The record speaks for itself: Far East high school volleyball tournaments long have been the province of Tokyo-area and Guam public and private schools. They&#8217;ve won six of eight Class A tournament titles and 25 of 30 in Class AA.

But the likelihood of winning shouldn&#8217;t be a deciding factor in whether to accept a tournament invite, said Chris Kelly, whose Kubasaki Dragons of Okinawa placed highest among DODDS&#8217; Class AA teams a year ago, finishing fourth.

Brian Swenty, in his fourth season of coaching the Class A Osan American Cougars of South Korea, agreed.

Osan will join three other DODDS-Pacific schools plus two Korea international and missionary schools and one each from the Philippines, Taiwan and Tokyo in the Class A tournament at Sasebo Naval Base in southwestern Japan, where play begins Monday.

Unlike Far East tennis, cross-country and wrestling tournaments, which became DODDS-only affairs in 2004, Far East volleyball, basketball and soccer tournaments are split by enrollment into Class A and Class AA fields and still welcome non-DODDS participants.

&#8220;We have to build teams from the ground up every year,&#8221; Robert D. Edgren coach Sarah Richardson said of the constant transfers of DODDS-Pacific players. In contrast, international programs keep players sometimes through 12th grade.

Still, coaches such as Kelly insist they&#8217;d rather face the stronger competition.

Richardson, whose Edgren players face only DODDS-Japan teams during the regular season, says she&#8217;d love to have the same advantages as DODDS teams in the Kanto Plain: taking on former Class AA champions American School In Japan and Seisen International and defending champion Christian Academy In Japan.

Especially at the Class A level, DODDS-Pacific teams &#8220;are struggling for height this year,&#8221; said Taegu coach Jennifer Sharp, whose team lost most of its tall players to graduation last spring.

In both tournaments, most teams will face each other for the first time this season. Said Kelly: &#8220;We&#8217;ll play to the best of our ability and let the chips fall where they may.&#8221;